The English translation of The Synod's Final Report has been published on the Vatican's site, After an initial skim I can't see too much that is wrong with it.
What do you think?
at December 16, 2015 27 comments:

Writing on the Pope's Wall

After the Holy Father's light show will his talk to the Curia be illustrated this year. Will he start using power-point? I'd love to see how he chooses to illustrate those 'neo-pelagian sourpusses'. "Parrhesia Day", as it has become known in the Curia, has become a day of significance, it is a day they get the drinks in to fortify themselves for the annual roasting and then to drown their sorrows afterwards. Sweepstakes are being run on what might be the insult of the year. Rough speaking by the Pope leads to rough speaking by those men (and women) who write letters for him, one Monsignor tries to include the word 'Promethean' in every letter he sends, another specialises in 'butterfly', as in 'butterfly Christians'. Its a game, but its a game about open and fearless speech, maybe a little intensified by the sense that you are probably going to sacked soon.

As for the Holy Father and the Environment, Americans get uptight about it but if saving carrier bags or turning down the heating a tad saves the Maldives or stops a turtle from getting indigestion or keeps alive a coral reef, I'm up for it. I'm with Paschal and his wager on this one: the consequences of rejecting the accepted view (if it is true) are horrendous - not quite hell but they are not good, whilst accepting it, being in harmony with the environment, is not heaven but it is an act of charity to share our resources, it is part of stewardship of creation. I have noticed in the last ten years a build up of moss on the north side of our buildings here, something not here fifteen years ago.

I have to admit I find something off putting about cats on social media, fish are probably even worse than cats but lets not get up tight about it. Old men and old ladies like those nature documentaries, and if the Pope wants to put them on the walls of his church they actually don't do any harm. Another Pope might decide to show Russian Icons, another might decide on displaying catechetical material, next year it might be naming or shaming those 'orrible 'fundamentalists', who we all hate but don't quite know who they are, or another Pope might decide to promote happy jolly Catholic families. My one quibble is that the pictures tended to be of the pretty or the fluffy, not many microbes, disease organisms or even mosquitoes.

Yes, we can get uptight, rightly so, by who the Pope is making friends with: the World Bank? the UN? Greens of varying kinds? Mmm! but in the end no-one has to look at it what is on 'his wall', even if he chooses the walls of St Peter's rather than Facebook. Obviously Italian intellectuals will think this is just a little bruta figura but that is what they have come to expect. 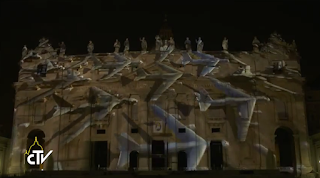 Now I know I am known for my radical views but why doesn't the Holy See, at least for the remainder of this Papacy reduce its carbon footprint. It would be too easy to dismiss Laudato Si as being window dressing, but a start would be for the Holy Father to abandon air travel. Rightly has he complained about "airport bishops"but most bishops I know spend a great deal of time going backwards and forwards to Rome. There is 'Skype' nowadays, or even the phone. I had to give evidence to Roman dicastery last year, six people turned up at my front door, four of them from Rome, only one of whom spoke English - ridiculous! The City of Rome authorities have said the city cannot cope with an implosion of pilgrims. It would be a positive ecological step to tell people to stay home, or if they must come to Rome not to fly, a pilgrimage is after all about the journey not the arrival.

It is fine for the Pope to use small cars but what a tremendous sign if he abandoned fossil-fueled transport altogether, he needn't look backwards he could look forward, I am sure there are new technologies that the Holy Father could highlight. The Vatican City is made for the electric car, and if the Holy Father must travel abroad there is 'slow flight technology'.
Already the Aula Paulo VI roof supplies much of the Vatican's electricity, why not declare the Vatican a Green State, using fairtrade produce, paying a living and just wage to its employees. Let us have more than words.


Is this the reaction to the Pamplona desecration of the Blessed Sacrament?

There was a time when priests were expected to inform the local Ordinary about any act of profanation of the Holy Eucharist, there were even Rites to be performed if a host was accidentally dropped on the floor. Now they have become so commonplace that we simply mentally note them, possibly with air of sadness, and move on. At the beginning of this year the Bishop of Ars ordered that the Blessed Sacrament be removed from every tabernacle in his diocese because of a wave sacrilege. There was a time when priests were killed to rescue the Blessed Sacrament from profanation, or even fire..

I am glad that the Bishop of Pamplona, with a number of his priests offered a Mass of Reparation but I wonder if the reparation was addressed to Christ for the offence to His Body or for to those of the faithful who found this action offensive, in the sense of a politician who apologises 'if you found an action offensive'. The answer of course is clearly answered by whether His Excellency introduced measures to ensure that never, ever again in his diocese was it possible that such profanation should ever happen again.

One of our recently retired Bishops spent over a quarter of century ensuring that no where in his diocese was the Blessed Sacrament reserved in the apex of any church. It was the diocese of Brentwood, and I am not entirely against this move - but read on, please. I have always wondered what impact was made on a individual or a community's spirituality if for living memory the Blessed Sacrament was at centre of the Church and genuflected to on entering the Church and then was suddenly replaced by a bunch of flowers or a piece of furniture, the priest's chair perhaps. I just don't think we can tell people, and keep a straight face, that our practice might have changed but theology remains exactly the same. Obviously if the practice has changed so has the thinking, the theology, behind it. It is a fiction that what we do can be disassociated from what we do. Lex orandi, Lex credendi, Lex vivendi. 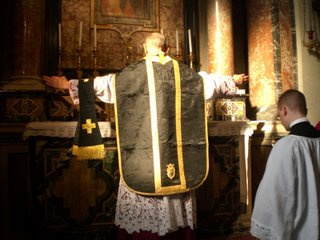 I celebrated Mass for my 25th Anniversary of ordination in the Extraordinary Form. one priest said, "I loved the music, what I found so alien was all that bobbing up and down". If the liturgy is the touchstone of what we believe, then although the words are important so too are the liturgical actions that accompany it. 'The bobbing up and down' in the Old Rite, the different postures, that are adopted -in the Roman Rite the joining of the fingers, in most of its derivative Rites the adoption of the 'crucis stance' mark a change in that which is on the altar.

Though I hate those videos of that picture the Old Rite as something glorious and the New as something trivial, there is a difference between Old and New Rite which is important, it is that the minimalisation of the change of Substance that occurs according to Trent and from St Thomas onwards at the moment of Consecration. Where Mass is offered 'ad Orienten' which according to Missal, and at least the last four Prefect's of the CDF have stressed, is normative, perhaps the difference is only noted by the priest.

In places where Mass is offered 'ad Populum', where this involves a deliberate turning of one's back to the reserved Blessed Sacrament by the celebrant, a strange 'anti-sign' is brought into play. What does it mean to encourage people to treat as God something to which at Mass everyone on the sanctuary turns their back on, it is a nonsense sign! and what does it say to the priest himself, more on the subconscious level than on the concious level? Hence I have a certain sympathy with the former Bishop of Brentwood. If the priest is going top turn his back on the reserved Eucharist when celebrating Mass, isn't it better it is reserved elsewhere? In the Old Rite if the Bishop was to sat before the tabernacle, even below the altar steps, the Eucharist was removed to a side chapel, hence it being the usual practice in Cathedrals. Let me not get onto concerts in Churches where the Lord is reserved.

I agree with Cardinal Sarah, "the great crisis in the Church is a crisis of faith", the greatest crisis of faith is crisis of belief is in the Eucharist. I find it difficult to draw a distinction between the sacrilege in Pamplona and the sacrilege of giving Holy Communion to a politician who is plainly working against the Catholic Church's moral teaching, or a couple living in a relationship that opposes Christ's clear teaching on the permanence of marriage. Then of course I am reactionary enough to consider it a sacrilege for a sinful or obviously heretical bishop or priest to celebrate Mass at all.