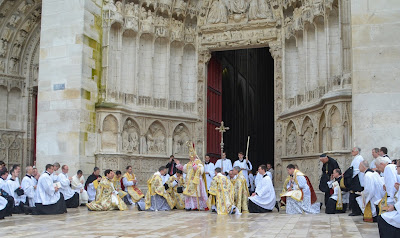 A French newspaper has reported Pope Francis, once Benedict dies, will abrogate Summorum Pontificum and handover Old Rite's celebration solely to the SSPX. Apart from saying that the Traditional Mass was not and could not be abrogated, he gave the right to every Western Catholic priest to say which ever form of the Roman Rite they chose; pretty logical considering the non-abrogation of the Ancient Mass.

Will Francis abrogate it? That is anyone's guess, but there are lots of questions that arise in my mind
What I can see happening is Pope Francis, possibly, refusing bishops the right to celebrate ordinations in the Old Rite but I don't think that will work either. It might be seen as sniping at one or two Cardinals
at July 10, 2017

Personally I don't see Pope Francis touching SP. It's against his way of operating. He likes the vernier of orthodoxy while he undermines it indirectly, which is why he chose the current head of the CDF. Except for a troubling footnote or two AL is largely orthodox, but those two troubling footnotes which weren't even pronouncements have given license to tear down the entire Magesterium of Pope John Paul II, especially Part 3 of the Catechism.

However, if a bishop is too friendly to SP, I would not be surprised if that bishop were investigated for something or another the way the Cardinal Burke and Knights of Malta were treated.

As for the SSPX, trust and a hardening of positions on both sides is the main reason the SSPX didn't reconcile under Pope Benedict XVI (Bishop Lefebvre asked for far less than Pope Benedict XVI offered). Under Pope "Decapitate Orthodox institutions" Francis, I don't see the trust relationship improving.

Needs Must! The Traditional Orders, Oratorians, individual diocesan clergy, et al, must stand firm together, otherwise all is lost - in the short term at least. What of the E&W Bishops, (Scottish deliberately omitted)?

I was going to ask which newspaper but it did not take me long to find the article although the original appears to be behind a paywall. At any rate it tells me that I have seen my quota of free articles for the present! It has however been reproduced on the Belgian website Belgicatho.

I do wonder whether this is merely guesswork or whether the writer really knows what Pope Francis has planned. It was somewhat ironic to read that 'in introducing a choice of rites the motu proprio has broken up the unity of the Church. Surely this is what happened once Mass was allowed to be said in the vernacular? Nowhere more than in Lourdes is this seen where each nationality gravitates to its own Mass and the only Masses where all nationalities come together is the EF if you are lucky enough to locate it.

One thing I did not know but which surprised me was to learn that when he was Cardinal Bergoglio, he once asked a Priest who was against the EF to celebrate it for those who wanted it. This was to underline that the Priest must not choose the rite in which to celebrate.

It appears that Pope Francis new cycle of Wednesday catechisms will be on the Liturgy so we may learn more from them about what he has planned. Until then in the immortal words of Clive Dunn's Dad's Army character 'Don't panic!'

Who is to say that he will outlive or out-office Benedict? We were promised a short reign although it seems far from that already. I suspect the story is false anyway.

I am more than a little concerned about what Pope Francis has done to the Church. He continues on, dividing and dividing, and wrecking everything.

It was troubling to read that Cardinal Mueller as he left his post at the Congregation appeared to have a passing "shot" at the SSPX saying they must in fact sign a statement they accept everything that V2 has declared. And he said he had obtained the Pope's consent prior to making this last official remark. I guess we dont know where we are headed but my hope is that every Priest will take the trouble now to learn the ancient Rite for himself and he will always be able to offer that Mass privately. This is important - that the eternal Sacrifice is said in as many places as possible for as long as possible. Please God this happens!

There is so much that is contradictory in this pontificate. While being merciful and non-judgmental are touted, no mercy is shown to many and summary judgment is employed by Pope Francis.

His accusation of Phariseeism in others rebounds on himself – “Do as I say, not as I do”. His name-calling of others is beneath the dignity of a successor of St. Peter.

His treatment of Cdls. Mueller, Burke and others is not just crass and autocratic, it lacks even basic courtesy and manners.

Paul VI had no authority to abrogate the Vetus Ordo and neither does Francis. Liturgy means 'work of the people', not 'property of the pope.'

But really, what will it take for these Novus Ordo bishops to admit that the Novus Ordo has failed? What more evidence do they need?

Summorum Pontificum has had particular consequences in Sweden. The Bishop invited a Priest from IKC to say Mass weekly in Stockholm and Lund. Unfortunately this gathered an unsavoury group of individuals with Nazi/Antisemitic inclinations, so much so that the "friends" group had to be disbanded, though the Masses continue, now exiled to the an out-of-the-way chapel.

There are also EF Masses in a few other places. However, the majority of priests are vehemently resistant, one reason being that they attract very small congregations - due in turn partly to the choice of time, it also ceases for a long period in the summer. Partly also, the Catholic church in Sweden is dominated by ex-Lutherans and they expect the liturgy to be exactly the same, so much so that it is scarcely recognisable as Catholic, but as they say, "if it quacks like a duck and walks like a duck..."

Thus the EF remains a fringe interest, in particular it has been adapted as a badge by Catholics of the extreme Right.

If you want to go every Sunday to a worthily celebrated Mass in company with normal people, an Orthodox church is the only option. Fortunately there are Serbian/Russian and other Orthodox congregations in the largest cities, in convenient locations.

While I take on board Fr Ray's view that reconciliation between the Holy See and the SSPX is unlikely, if the Holy Father succeeds in this diabolical plot, it raises other questions. If he abrogates Summorum Pontificum would that also abrogate the universal indult of 1984 of Pope St John Paul II which allowed the celebration of the Old Rite with permission of the bishop? In England, which is neither a Catholic country nor any longer a Christian country there is more enthusiasm for the Old Rite than in most countries. The Latin Mass Society was formed in 1965, and Cardinal Heenen secured the "Agatha Christie" indult in 1971. So the Old Rite never died out here. More than one church has now been given over exclusively to groups who worship only to the Old Rite. If the Pope bans it except under the auspices of a reconciled SSPX, then those of us who are committed to it would simply worship from there on in with the SSPX, which would get a huge influx of new members. If this is the plan of the Holy Father, it would be better for the Church if Pope Emeritus Benedict outlives him.