The Sin of Silence 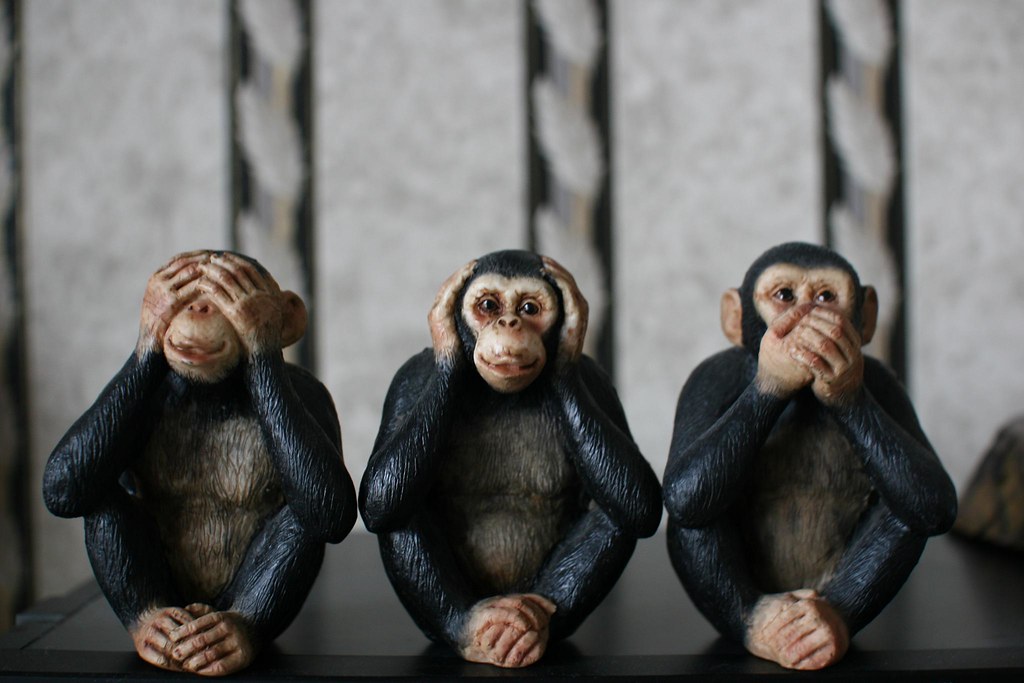 One of the worst evils is keeping silent in the face of evil, the Church seems full of men who are too weak, too effete to condemn what is wrong. This was the great scandal of child abuse, men who turned a blind eye to the immorality of others, who covered their eyes and refused to see the abuse around them, who covered their ears to pleas for justice and gagged themselves and refused to speak either to denounce grave sin or to protect the innocent.

Silence signifies acquiescence. When it hides serious sins or crimes it makes us accomplices and equally damnable with the perpetrator. The silence of so many bishops and priests in the face of the teaching of error is grave wound on the Body of Christ.

It is true sometimes silence can be an act of prudence, especially if one doesn't know the facts. It might have been prudent for the Holy Father to have kept silent when he accused the government of a South American country of being complicit in the kidnapping and possible murder of someone who was actually a government soldier kidnapped by a rebel faction.

In the case of St Thomas More's silence on Royal Supremacy, though he refused to sign, but then even with More his silence, unlike Fisher's outspokenness, gave rise to some finding an excuse to accept Royal Supremacy. Perhaps here we see the difference between the prudence a married man with dependants should exercise over following God's will, and the freedom celibacy gives. Though ultimately both More and Fisher ended on the executioner's block, and contemporaries said, 'said his silence echoed like thunder throughout Europe'.

I came in for a little criticism recently, when I wrote, "I certainly don't trust Monsignori or anyone who is not willing to back up a damaging statement about the Pope without being willing to put his name to it". Some people suggested the climate of fear in the Vatican at the moment justified anonymity for fear of losing one's career or pension or the esteem of superiors or colleagues. These are not the arguments of those who trust in God.

It is certainly praiseworthy to bear one's own suffering in silence but to be silent when others suffer is not a Christian option, it is sinful.
at July 17, 2017

Absolute truth. My Mother was a victim to a Monsignor, who had touched her. When she went to confide in another parishioner about what to do, the woman sarcastically said that she could waste her time by going to the chancery, but they are ignoring all claims and even accuse the victim of having done something to have provoked the Monsignor. The damage done to so many innocent souls was horrifying.

Yes, Fr., it IS INDEED sinful to keep silent in the face of evil. But Christian courage is not a virtue that is found in an overwhelming majority of our clergy. Not saying that it's not found in a number of them, but reality is reality. The line from the Wizard of Oz comes to mind: "We're not in Kansas anymore, Dorothy."

TLM, On the contrary, given the episcopal pressures on the secular clergy in countless dioceses of the world, I find it extremely heartening that so many priests find the courage to be tactfully and politely but firmly outspoken on so many occasions, something for which they can be (and often are) horrendously penalised. I would like them all to know how much their dignified daily courage silently inspires us members of the laity who could ourselves speak up, but are so often too fainthearted to do so.

What I personally find difficult and even impossible to understand and forgive is the cowardly reticence of the management class: bishops, archbishops, and cardinals. They saw what was going at the Synod. They protested briefly during the second session. But even when they noted that their objections had merely delayed the faked interim 'report', even when they saw their conclusions further distorted in the final paper, and further still in the post-synodal apostolic exhortation, and then considerably further in the declarations of national conferences of Germany, Malta, Argentina etc. - yet even then they did not renew their protests. On the contrary, most of them wheeled behind the 'mercy' shibboleth.
(And what a dramatically ironic use of the word 'mercy' - so similar to the way we cravenly call the slaughter of the weak 'mercy killing'.)
Once they saw which way the wind was blowing, many of the synodal bishops just decided to tacitly acquiesce: they gave the matter no further attention, and became yes-men.
There *are* still bishops faithful to Catholic doctrine, but where now are their voices? The rigid hierarchical dictatorship proceeding from the Chair of St Peter has frozen all rational episcopal discourse on doctrinal matters. The papal attitude seems to have been the legendary one of the schoolmaster: 'Find the biggest boys in the class and beat them to a pulp in front of the others.'

But I do not wish to strain Fr Ray's generous hospitality to us on this website by going any further.

Supine indifference to evil is the characteristic of some Bishops.

"One of the worst evils is keeping silent in the face of evil,..."

Maybe they just don't really care....or maybe they are on board with the program.

Once you start to examine the information dating from WWII you begin to see that we have all been rendered docile by the hegemonies which emerged. The one in Eastern Europe is obvious but a no less pernicious influence was exercised in the West by the dominant power.

When Macintyre suggested the Benedictines as a solution in the early 80's it was really a call to prayer, work and silence. B16's resignation needs to be understood in that context.

"Clouseau: Does your dog bite?
Hotel Clerk: No.
Clouseau: [bowing down to pet the dog] Nice doggie.
[Dog barks and bites Clouseau in the hand]
Clouseau: I thought you said your dog did not bite!
Hotel Clerk: That is not my dog." - The Pink Panther Strikes Again - (1976)

When 60,000 pro-lifers were blocking doors, and cops were removing them, thereby making themselves direct accomplices to abortions, only one American bishop declared the truth publicly: The police were being ordered to make themselves accomplices to murder. He wrote letters to that effect for the police to present to their superiors. That bishop was René Gracida.

Every other bishop maintained silence--except for several who condemned saving the lives of babies. (E.g., John May, James Malone)

This was in the 1980's. These men, who were unmoved by the deaths of babies, and unwilling to fulfill their duty to instruct the police in the moral law, were later exposed (66% of them) as accomplices of sexual abusers among their priests.

Men who showed total indifference to the murder of children were later revealed as totally indifferent to the rape of children.

Indeed John Vasc, what you say is quite true. This silence is a form of complicity and is widespread even in those conservative Church circles where one would expect orthodox people to raise a protest.
It amounts to a conspiracy of silence and is disheartening

Reuters report that the Pope now has a sign on his door reading "Vietato Lamentarsi" which Reuters translated as "No whining" although Google translates it as "Complaining is forbidden" which seems more correct than me. Anyone with colloquial Italian who can comment?

But does it not suggest that some people have been complaining? After all we do not know all that goes on the Vatican. Perhaps something is getting to him? Perhaps others will see there is little point in speaking to him directly and other means may be more appropriate?

I agree that silence is both a virtue and a scourge.

Let's take just one topic; Current horrific sexual deviancy and its encouragement by this Pope.

How many Bishops have opened their mouths and cited anything about the following?

* PF promotes Daneels, he of the predatory homosexual protection service and the presider (sic) over the infamous "Belgian catechism" which included cartoon drawings of how to molest your own children, even making him his personal representative to a Synod Against the Family;
* PF protects and promotes Ricca, the known pervert Nuncio who was caught in a lift of his Nunciature with a rent-boy and a suitcase full of "adult toys";
* PF restores to active ministry a laicised priest who is a child rapist.
* PF welcomes to the Vatican trannies and other perverts who define themselves in terms of their particular debauchery;
* PF does nothing while obvious homosexuals such as James Martin SJ and their supporters feel entirely free to spread their foulness far and wide, knowing they will not in any way be impeded;
* PF explicitly praises abortionists and radical population control devils, even appointing them to Vatican posts.

Indeed, the silence is DEAFENING!!!