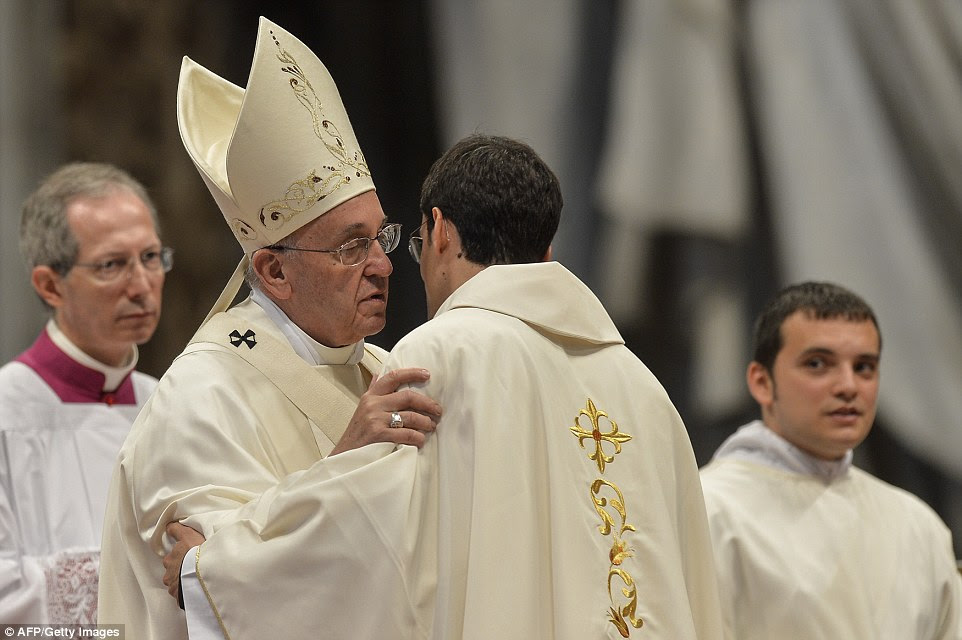 I know this is mainly from ACP and therefore should treated with at least a bit of caution, it is an ACN report suicide among clergy in Ireland. It is based on eight suicides in ten years, though the number could be much, I suspect Irish coroners might be concerned for relatives and only record those deaths as suicides if there is no possibility of a priest's death being interpreted in other way.

What it does indicate is the low morale of the Irish clergy, as it is the ACP it is presumably especially acute among their members the more liberal and more elderly clergy. The picture is of old exhausted men doing their best to cope and at the same time coping with loneliness an isolation.

Ireland because of its recent history might be a little extreme but I suspect it reflects the situation in the rest of Europe and maybe the Americas too. One of my predecessors ended by losing his faith, in practice leaving the priesthood and the Church, he died in very suspicious circumstances, he left instruction that there should be no religious rites at his funeral, at least two other priests I know have left the same instruction.

Bishop Egan has spoken of his concern about the spiritual lives of retired priests who move out of their parish give up wearing clerical dress and often saying Mass. While I was ill I thought I might well have to retire it was a depressing prospect, my parishioners give me practical support, their demands for the sacraments: daily Mass and confession give structure to my life, and most importantly they give me friendship and pray for me. Retirement meant either a little house somewhere, with none of those supports  for someone becoming less and less able or a nursing home, I think I would have preferred death to both. Many priests,. I think put off retirement, simply because the prospect can be so lonely.

I have a young priest friend in what some might describe as a not very nice diocese, I suppose he is bit immature at times but he has no support at all from any priestly friends, there are few young clergy in his diocese, his seminary classmates are all different parts of the country, his parish priest is out of sympathy with him theologically, liturgically and just about every other, in the old days he would have been described as a 'curate breaker'. His bishop telephones him from time to time but never to encourage, or just to talk, always to complain or criticise or to reprimand.

During my illness I was so grateful to priests who phoned or visited and texted me. I am ashamed that I am not very good at doing that myself. In most diocese there is very little 'pastoring' of pastors. In Ireland as in England after the abuse crisis or other serious scandal very few bishops offered support to those priests who were often deeply wounded by the crimes of their brothers or their subsequently deposed bishops. I remember an old priest on his deathbed saying, "Ah, sure this might get the bishop out to see me but only when I am in my coffin". It was true the bishop hadn't seen him or contacted him in the five years since he retired but he did turn up for his funeral.

Another priest friend visited a retired priest and was a little horrified that said he hadn't be to Confession for five months because he hadn't seen a priest for that amount of time.

This is repeated in many diocese, perhaps some have a priest who might be appointed to care for the sick and elderly but it is not regarded as important.

In Ireland the suicide amongst clergy might be amount to less than one a year but amongst many spiritual suicide is not quite so rare, there seem to be a steady stream of younger priests leaving and perhaps equally worrying older priests staying despite having lost either faith because they have nowhere to go. For any bishop care of his spiritual sons, his co-workers should be a priority - for the majority it far down the list.

O Lord. This is tragic. The Apostles had holy women to assist them didn't they Father? Why don't they have housekeepers any more? At least they might be someone to complain to who would give encouragement and help in illness, holy old ladies who would work for nothing. Surely women in their congregations or even retired sisters would be willing to help in whatever way they could if they would ask? There are homes for old priests here in US, but I don't think most want to end up there. Old age is so difficult, even for lay people who don't have families. Prayers daily.

A friend who is a PP here in Ireland had a different experience. His bishop, when the PP's mum died after a long illness, took over the weekend Masses in his parish. Then he celebrated the funeral Mass and then arranged supply for the parish so that the priest could stay with his dad and siblings, so they could grieve together. I've never found that particular bishop exactly inspiring but he was, you might say, paternal when it counted.

Sometimes it is those we perceive as not been inspiring ,who come to the fore when the chips are down,or perhaps the bishop in question is a better pastor than being a bishop ??

Sadly I see this in my own Parish, our PP was 'retired' on ill health grounds a few months ago as it turns out he has the same genetic illness (non physical) from which I suffer. I don't think that anyone from the Parish has seen him since.

Personally I think that it would be a good idea (if we insist on retiring Priests) that we ensure that they live somewhere in community. An idea might be that (assuming we have enough Priests) that Father X continues to be the 'official' Parish Priest and says Mass and gives spiritual direction, whilst a younger Priest takes over the day to day running of the Parish.

I also think that we need to bring back live-in housekeepers.

Delighted to see you back, Father. My parish is run by the Redemptorists, and we have ten priests, some of whom are very old. They all seem fully inspired and committed, and all of them preach first-class sermons. We have over a thousand communicants at the Sunday Masses. I think secular clergy should be encouraged to live in community like this; loneliness is an appalling disease, and in these times when few priests seem to have houskeepers, community life needs to be given serious consideration.

Scribe,
Yes, it is the Community aspect we have lost, most parishes under the Old Rite had at least three priests to act priest, deacon and subdeacon for Solemn Mass, some even have a spare normally an older priest for 'the box' during Mass. Now a single priest can say Mass most of us live on our own and become rather eccentric with it.

This is an excellent reflection! Adding to what you have written is the decimation of active clergy by the sexual abuse crimes. Unfortunately, too many bishops have little 'life' experience and are incapable to lead as we need them to! Unfortunately as well, many are, as one of our deceased priests referred to as 'churchman' and not pastors.

Housekeepers are not the answer; I am glad those days are gone! And most priests baulk at the idea of living in community. We all have to be mature enough to ensure we have a robust spiritual life and find the necessary ongoing formation from somewhere (Opus Dei, for example, is excellent at this). From that flows all other things necessary. I certainly don't want a housekeeper - nor to live in community!

This notion mystifies me. Priests have ample opportunities for support, friendship, and collaboration. But those are often with lay people. The people I studied with are also scattered to the four winds, but I'm given the opportunity to make connections with the people I serve. My best and closest friends have often been those in my choirs or those I've assisted in their parish ministries.

If priests in Ireland are really feeling isolated, perhaps some are not taking advantage of the opportunities with the lay professionals on their staffs. Or, if they are serving in small parishes, with key leaders in the community. Certainly, some guys are introverts. Some may be less skilled in social graces. But the connections exist; they just have to be engaged. If retirement is really a fearsome things, at worst, there's always the Luke 16:1-13 tactic.

Lord provide for your priests