The Ark was seen in the Temple

I love this image from  the Beatus Facundus, it is a simple theological statement as bold as the colour scheme of this extraordinary theological work. It simply says Mary is in heaven clothed with the sun, standing on the moon and adorned by the stars.

The woman with the moon under her feet and the dragon has more significance in the Iberian peninsula that was struggling with the liberation of Spain during the lengthy reconquest period, which was fueled in part by the expectation of the second coming as the end of the first millennium drew near.

It comes from that period when East and West had a common theology.
The double page illustration adds depth: God has rescued her. Though the dragon seeks her destruction it is held at bay by angels, who will eventually subdue Satan. 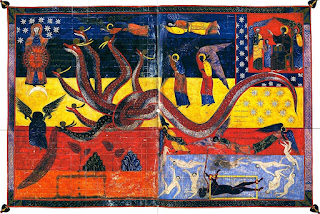 Looking at these illustrations there is sense that they are concerned about theological fact: Mary, the Woman is in Heaven. They are not concerned with the mode of her transferal but with the statement of what scripture states, In comparison the artistic depictions of the Assumption from Trent onwards and even Munificentissimus Deus seem a little effeminate, even prissy, little wonder another priest can speak of the definition of Pius XII as 'radical austerity, the innovative agnosticism'.

Although the story of an Apostolic Funeral following Our Lady's passing is charming, and illustrates well Our Blessed Lady's death, it is obviously an illustration of and not root of the doctrine of the Assumption. This comes from the New Testament Apocalypse 11:19, where John says, 'Then God’s temple in heaven was opened, and within his temple was seen the Ark of his Covenant. And there came flashes of lightning, rumblings, peals of thunder, an earthquake and a severe hailstorm'. He then speaks immediately aftewards of, "the Woman", who is obviously Mary, and yet is also the summation of all the women of the Old Testament. Mary is the ark who contains not the symbols of the Old Covenant; the manna, the tablets of the Law and Moses' staff but the bread come down from heaven, the Law writ on a heart of flesh and not the symbol of Moses' authority but the source of it.

If we are to have a truly Christian faith, we must learn to love Mary as did Christ and the Apostles, and give her the same honour she is given in the New Testament.
at August 15, 2016 6 comments:

Towards a Fourth Edition I am fascinated by Joseph Ratzinger's liturgical writings, he says the Bugnini created the post-concilliar liturgy 'ex nihil' and yet he performs elaborate gymnastics to graft roots onto it.  Ratzinger's life work was see the hermeneutic of the Church in terms of 'continuity', simply because, although it is possible to understand it in terms of aggiornamento, it is impossible to see it in terms of  'rupture'. Rupture is simply not Catholic. Ratzinger pushed forward the idea of reading the Council its documents being understood in the continuity with all that had gone before but he actually spoke little directly about liturgy, the fons et origo of the Church's life and theology, in these terms. Yet of course his liturgical style, his choice of liturgical ornament spoke of 'continuity' but the greatest act of 'continuity' was of course the recognition of what scholars had been saying for decades the the ancient was not abrogated and what was good for past generations is still good and has value for us today.

One of the things that Ratzinger's resignation brought about was quietening of rumours about a fourth edition of the Roman Missal. It was expected to be issued possibly in 2015 or 2016, other events took over so presumably it is awaiting different times. It has apparently long been in preparation by what one or two Italian Vaticanistas refer to as 'the hidden Vatican', those academics and experts who carry on their work no matter who sits on the Apostolic throne. As real academics they are concerned about truth and academic rigour and resolving apparent ambiguity.

The last three CDW Prefects have hinted at the contents of such a Missal, suggestion that a future new edition of the Missal could contain more Latin, even be bi-lingual, has been suggested, the optional use of the ancient offertory prayers, increasing options to include many of the prayers of the 1962 Missal, even the possibility of the preparatory or prayers at the foot of the altar being included. Cardinal Sarah's recent intervention about the orientation of the celebration of the Mass is obviously very much in tune with the thinking behind such a Missal. His idea of the Liturgy of the Word being celebrated facing the people whilst the Liturgy of the Eucharist being celebrated facing the apse seems to be a very sensible implementation of Ratzinger's 'mutual enrichment'.

Whether there will be room in such a Missal for the non-Roman oriental-style Eucharistic Prayers II,III and IV, is another matter, perhaps they might go the way of the various Eucharistic Prayers, which are no longer in current Missal, perhaps they might be included in a supplement? One of the big problems will of course be the two calendars currently in use in the Latin Rite and of course the ancient one year Lectionary as opposed to the three year expanded one.

In this vein there is an interesting article: A Call for the Silent Canon which deserves some thought. In Low Mass the Canon was said in a low mutter, which reflects the origins of Low Mass's monastic origins; multiple priests offering multiple Masses at the altars in relatively close proximity but in High Mass the normal voice used was the un-projected ordinary speaking voice, loud enough for at least the circumstantes to hear and understand. I am told this is how Cardinal Piacenza, who at least was a member of the Congregation for Divine Worship and the Discipline of the Sacraments, he is the Apostolic Penitentiary at the Vatican, so presumably has some grasp of the Church's liturgical law. I like the idea the article presents that the Eucharistic Prayer is not a 'Presidential' prayer. Perhaps liturgically informed friends might comment here or privately.

At this time, it is perhaps important that those who believe in 'continuity' hold firm to this teaching and celebrate in the liturgy.
at August 11, 2016 22 comments:

The Archbishop is not pleased!

To be told, "John Charles [Archbishop McQuaid] is not pleased!" was enough to quell not only the clergy of his own diocese of Dublin but the rest of clergy Ireland. Archbishop McQuaid was the worst kind of ecclesiastical bully and did much to reduce the clergy of Ireland to quivering 'yes men'. I am sure one of the reasons behind the Holy Father's call for parrhesia, is the realisation that without open and fearless speech on the part of the clergy, a culture of cover-up and bullying results, in which clergy are simply afraid to speak out, to ask questions and above all to demand answers and clarification. As members of the Presbyterate this is a key priestly function.

This is precisely what did not happen in the Irish child abuse scandal and in the even greater scandal, the episcopal cover-up that followed it, Except possibly in the most deformed form of Ultramontanism bishops, even the Bishop of Rome, are not above question or ever admonishment, No bishop is called to act alone but always with his 'co-workers' his priests. The great beauty of the Catholic Church is that between priest and bishop, despite the titles we might invent and the various bodies we put in place, there is actually no intermediary, the same with bishops and the Pope.

McQuaid was not alone but some fifty years after his death. it is easy to make him emblematic of a style of episcopacy that today should be regarded as deeply sinister, that replaced the father-son relationship of bishop and priest based on a communion of charity with fear and intimidation, making the bishop more like a mafia boss than a humble disciple of Christ, and making priests into cowed and silent prisoners than disciples. In this country, we actually used to speak of the 'Irish Mafia', which was often a very real power of intimidation within dioceses, it often took the Dublin model of episcopal authority. I remember a young priest being told by episcopal favourite, a leading member of our Mafia, 'I can tell you I have the bishop's ear in this matter'. The young priest replied, 'Really? Then give it back to him Monsignor before he notices'. It was a throw away remark which quickly went round the diocese, and rather quickly led to this particular Monsignor's fall from credibility and power.

For years there have been questions about the theological and consequently moral formation of students for the priesthood at Maynooth, Various bodies have been set up to answer, or as is the way of the Church, not answer questions. There is an interesting article here which shows the rather interesting structures that are set in place to assess student's complaints, which seem more about deflecting and delaying them and ensuring the President is distanced from those who complain, rather than answering them.

The rather ridiculous press statement from Fr Hoban's Association of Catholic Priests reflects that frightening concern of priests of a certain vintage for the institution, rather than a concern for victims of abuse, or a desire for truth. It begins with, "The Association of Catholic Priests (ACP) regrets that the seminary at Maynooth College has become a focus of unfair and unwarranted attention," The jury, from what has come to public attention, isd still out on whether the atention is either 'unfair' or 'unwarranted'. It ends with words so reminiscent of the bishops and others over child abuse scandals, "The damage this controversy will do to Maynooth is not in the best interest of the Irish Church."

I don't know if there is a gay culture at Maynooth others can comment on that, what I am concerned about is the abusive culture which seeks to silence questioning and close down debate and place certain people in the Church above intelligent and charitable questioning. This is real sickness within the Church, as far as Maynooth is concerned from the very beginning of a seminarians life there seems to be an attempt to enculturate them into something even more unpleasant and dehumanising than 'gay culture', a culture where obedience to an institution is supposed to take the place of honesty and truth. It is this terrible obedience that opens the door to every kind evil.
at August 09, 2016 25 comments: