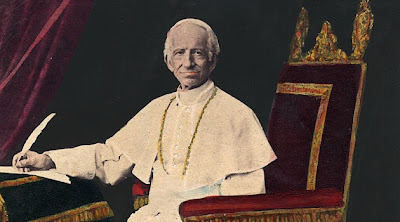 Joe Shaw has an interesting piece on Hamish Fraser's conversion.  It reminds me of my own conversion from socialism to Catholicism.

Fraser discovered Leo XIII's social teaching, for me it was the discovery of the lived experience of Catholicism, formed in part by Leo's teaching. As a Socialist there was something beautiful about a 'brotherhood of mankind' but it seemed to exist nowhere.

When I became a Catholic in the 1974 the liturgical destruction had already occurred but so many of those things that Dr Shaw speaks or hints of remained intact, there was still a 'Catholic culture'. Catholics believed in Life, so many of those I came across were involved in the caring professions because they were Catholics, they were doctors, nurses, social workers and teachers, they had larger than average families because they were Catholics. Family prayer, giving generously to the missions, caring about education were still marks of their faith, and whether they were politically right or left their politics came out of their faith rather than being an adjunct to it. In my own town it was Catholics who set up the first shelter for the homeless, It was Catholics who were predominant in caring for the handicapped. The two best schools, after the ancient Grammar school, were staffed by priests and religious sisters. Though not that common it wasn't unusual to see the nuns in the streets. The first visit I ever made to hospital before I even went to school I remember impressed by a Vincentian nun in her highly impractical coif, presumably she was there training. At my secondary school we had for a few terms a retired Jesuit, all our teachers wore gowns if they had a degree, he wore a gown and a cassock.

It wasn't that Catholics were ghettoised as our now retired Cardinal so often used to suiggest but rather they came of a strong place to give vigour to our society. Dr Shaw hints at what I discovered, that in the Catholic Church, under the fatherhood of God a new social vision existed a real brotherhood of man.

Our loss is more than a liturgical tradition, it is a culture. Nowadays the great problem of the Church is not what we have lost but the fact that we have now very little to offer, the problem is not what has been taken but that which have freely given up and we have no alternative vision to offer. For the first time in my priestly life celebrating the Holy Week liturgies have not be been a delight but thank God for my servers, who picked me up and stopped me wobbling or falling over during the Holy Thursday and Good Friday liturgies.
I suppose if I were my own confessor I would congratulate myself on being able to share physically in the passion but in reality it is just frustrating! Next year, well, either I will be better, or perhaps I won't be able to do it at all!

A liturgical thought - today for us is dies non, until sunset and the Easter Vigil, I used to try doing the Office of Readings but it never caught on, but for our Polish community it is the big day, even the lapsed turn up for 'basket blessing', even if they don't turn up for anything else, even Easter Mass.

It is obviously a vestige of the Old Easter Vigil which happened on Holy Saturday morning, when people brought the foods forbidden in Lent to be blessed with paschal water in order to end the Lenten fast and to visit the the dead in the cemetery. The Liturgy of the Hours is very much about the consequences of the Redemption of the Cross, the tearing of the Temple veil, the descent into Hell, the freeing of our first parents and the conquering of Satan, and the opening of Heaven to the Just. What was celebrated was not so much the corporal Resurrection of Jesus in the flesh but supernatural overcoming of evil and the establishment the Kingdom.

Few defend the notion of Easter 'Vigil' happening on the morning of Holy Saturday, yet it seems entirely sensible and logical to celebrate the 'hidden mysteries' of the Resurrection in a sparsely occupied Church rather than vacuum that the Pian reforms introduced as to, or for the Poles and other Eastern Europeans, a rather confused liturgical day, after sixty years of catechesis the Vigil though the most important of the Church's liturgical actions is still not, in many places, the best frequented.