The Reception of Pope Francis 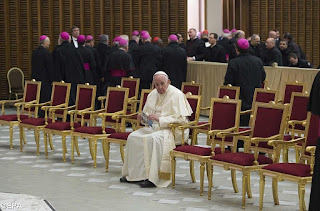 In practice one could even suggest that the Great Schism of 1054 only came into effect in 1870 with Vatican I. Until then there seemed to a fair degree of inter-communion, even the acceptance of mutual jurisdiction, Orthodox nuns sought out Jesuit confessors, even Orthodox declarations of marriage dissolution/divorce* were often accepted in most parts of Italy and most of parts of the Catholic world east of Italy. And although as in the Eucharist we might have expressed our theology very differently that these expressions were actually cultural rather than actually an expression of different beliefs, ultimately we could both say, "this is Jesus".

Yesterday I was listening to Austin Ivereigh on the BBC, the self appointed Papal apologist, who was speaking about the 'reception or non-reception' of Amoris Laetitia and the Holy Father's teaching or even reign and in Saturday's L'Osservatore there was this fascinating article which speaks of the Italian clergy, high and low opposing Francis. The inference being the Pope was a goody the clergy baddies and ignorant too. Historically that is not how the Church works and this article will probably only serve to highlight the isolation of the Pope and encourage others to speak about it.

I rarely agree with Ivereigh, I often wonder if the Pope does but I think that his reference to'reception' is important. In the West we have a very feudal and increasingly from the US a presidential attitude to authority, which sees it coming down from above and is imposed on those below. The Orthodox approach is I suspect a little more 'Catholic', certainly patristic, it is that Councils and Bishops teach but this is their teaching not the Church's belief until it is accepted by the whole Church (St Vincent of Lerrins, Catholic faith is that believed always, everywhere and by all).

Thus 'The Faith' is the belief of the whole Church and certainly not a few of its hierarchy. Indeed a Pope or Bishop cannot identify themselves as the Church they are ultimately as significant or insignificant as anyone else. Newman interestingly wrote after Vatican I that what the non placet party did and what happened to them was of great importance, obviously he was interested in the long term reception of the teaching Vatican I, post Vatican II we might be thinking not of Old Catholics but of the East too.

In the early days of this Pope's reign when he so often described himself not as Pope but as Bishop of Rome I thought that we might move to an understanding papacy acceptable to the lungs of both East and West, in line with Patristic teaching, and what I would say was in line with truly Catholic sentiment. A bishop has authority only because he acts in communion with his diocese and with the Church Catholic (the Church in Heaven and on Earth). The Bishop of Rome is no different, indeed than being President of the Church or even its monarch he is the servant of the servants, a title little used nowadays.

I have been bashed by a notorious sedevacantist recently; no rational person would question the election of Francis, he is Pope, despite the manipulations of the St Gallen group. What is a much more a Catholic concern is the acceptance of Francis' teaching, ultimately how the Church will remember him, indeed if it will remember him at all or as little more than a brief historical throwback or curio. Remembering or not remembering is how the Western Church really deals teaching from above, from Councils, Popes and Bishops.

If the L'Osservatore article is correct, and there is no reason to imagine that it is not, or that it is just reserved to Rome or Italy, it would seem that despite popular acclaim of journalists and those outside or the edge of the Church that the clergy as it says 'high and low' -and presumably the committed laity- will quickly forget Francis, most of them of course will still continue when Francis moulders silently in his tomb amongst his predecessors.

'In the end the Lord wins'.

*On the Orthodox divorce practice, I had a discussion with an Orthodox priest who said, it was practice of Orthodoxy but not its belief because it was plainly contrary to scripture and contrary to Orthodox practice, generally, of lifelong loving Orthodox marriages and therefore it could not be deemed 'accepted or received Orthodox teaching'.
at July 24, 2017

Did not the "Blessed Austen" liken Francis' tribulations to that suffered by Christ leading up to His crucifixion - in the same programme? Or did I hear only that which I wanted to hear? On that same programme, the unbiased BBC, raised the problem for the Vatican regarding +++Pell's 'child abuse problem, but nary a word regarding Vatican insiders' involvement in
debauchery and police arrests.

Father, you said: ...[N]o rational person would question the election of Francis, he is Pope, despite the manipulations of the St Gallen group.

I'm not 100% sure I can agree that it takes irrationality to question the election of Francis. Given all the circumstances, and the anomalous fact of the predecessor of a reigning Pope still living (and not imprisoned), and that we are still very close to the event, and that there is profound confusion in the Church right now, I don't think it is entirely irrational to at least ask whether there is an issue.

What we go on to do about it is another matter. Right now the Church says there is no issue; I don't think it beyond the pale that at some future point she might study the matter in order to resolve any continuing controversies. But even if there were an issue, there would really be nothing we could do about it except pray and do penance. We certainly could not leave the Church over it.

Regarding "reception" I suggest that we ponder the following, from the Declaration of the Joint International Commission for Theological Dialogue between the Roman Catholic Church and the Orthodox Church, "Synodality And Primacy During The First Millennium: Towards A Common Understanding In Service To The Unity Of The Church", Chieti, 21 September 2016

"7. The history of the Church in the first millennium is decisive. Despite certain temporary ruptures, Christians from East and West lived in communion during that time, and, within that context, the essential structures of the Church were constituted. The relationship between synodality and primacy took various forms, which can give vital guidance to Orthodox and Catholics in their efforts to restore full communion today….

18. From the First Ecumenical Council (Nicaea, 325) onwards, major questions regarding faith and canonical order in the Church were discussed and resolved by the ecumenical councils. Though the bishop of Rome was not personally present at any of those councils, in each case either he was represented by his legates or he agreed with the council’s conclusions post factum. The Church’s understanding of the criteria for the reception of a council as ecumenical developed over the course of the first millennium. For example, prompted by historical circumstances, the Seventh Ecumenical Council (Nicaea II, 787) gave a detailed description of the criteria as then understood: the agreement (symphonia) of the heads of the churches, the cooperation (synergeia) of the bishop of Rome, and the agreement of the other patriarchs (symphronountes). An ecumenical council must have its own proper number in the sequence of ecumenical councils, and its teaching must accord with that of previous councils.(13) Reception by the Church as a whole has always been the ultimate criterion for the ecumenicity of a council."

I would be inclined to stick my neck out and say that, given the final sentence of no. 18 above, there may well have been no truly ecumenical council since II Nicea in 787 (the Triumph of Orthodoxy).

If I understand the Osservatore Romano article correctly, the writer is claiming - in a breathtakingly banal generalisation - that the lack of support for Pope Francis among the clergy is down to 'the antiquated attitude, old-fashioned use of language, and repetitive and lifeless way of thinking of a great proportion of them.'
That really just seems to be more of the same-old-same-old media adulation of the 'liberal and spontaneous' Francis as an excuse of freethinkers to heap scorn on the Church.
So, nothing to see here, we might say. But that the freethinkers now claim to be Catholics and are not publicly rebutted or slapped down - except by a few courageous bishops - is an alarming problem we have to contend with.

Off the point but important. On Rorate Coeli there is an interview with Cardinal Muller:

He is now able to speak much more freely and now clearly supports the dubia. It is well worth reading.

Dear Father. There are many problems with the Orthodox Church and not just with its heresies but one of its interesting modern problems is the way it does or does not make assumptions about the necessity of being in Communion with the Pope.

The history is quite clear, the East always accepted Papal Primacy. Here is link to a list documenting that:

As for the two lungs, the Catholic Church has always had two lungs and it has two lungs today for there are Christian Catholics of the East who are in union with the Holy Father.

It is of Tradition that all babies baptized rightly are baptised Catholics and members of the Church untli such time (say, 7 y.o.) they continue to adhere to the errors of their sect; "We hold it for certain that these baptized by heretics are separated from the church and deprived of all the blessings enjoyed by her members, if they have arrived at th age of discretion and have adhered to the errors of their sect." Pope Benedict XIV "Singulari nos" Fen 9, 1749