Tradition: A theology from below 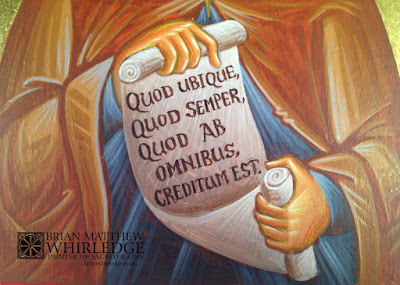 A few quick thoughts on Cardinal Sarah and mutual enrichment. I think the Cardinal is perhaps one of the most impressive spiritual writers of today, he is brave when others are craven – but he seems not to understand the nature of ‘Tradition’.

‘Tradition’ will always be regarded as dangerous, especially in an increasingly monarchical Church. It is not a movement, it is something below a movement, it is grass roots thing. Those who have respect for ‘Tradition’ should also have respect for the hierarchical structure of the Church but ‘Tradition’ is something beyond that. It might well be signified by a love for the Old Mass but it is more than that, after all what is the ‘Old Mass’? It is something which in the end ended a process of an organic development which ended with Missal of Blessed John XXIII in 1962, hence the attachment to that Missal but it is more than that.

‘Traditionalists’ are unhappy about the Cardinals suggestions for mutual enrichment, fine to introduce elements of the Old Rite into the New Rite but to do things the other way round is unacceptable. ‘Traditionalist’, many of whom have difficulty with certain aspects of Vatican II that are out of keeping with let’s say Newman’s theory of the development doctrine look to another age and another type of ecclesiology, something which arises from below, from forgive me for returning yet to him, St Vincent of Lerrins’, "Quod ubique, quod semper, quod ab omnibus, creditum est." Or in English, "That which has been believed everywhere, always, by all people."

There is a tension coming to the fore in this Pontificate, amplified in part by Amoris Laetitia but its strong centralism too, and imposition of doctrine from above, with something far more pneumatological, the slow gentle movement of the faith amongst the grassroots of the faithful which is the real ‘theology from below’. It is something which Catholics have always understood from scripture about the working of the Holy Spirit, that he leads the Church into deeper understanding of the faith as he does through popular movements as much as he does through Papal or Episcopal interventions, indeed he does this in the reception by the faithful of Papal or Episcopal doctrine.

It might be necessary at times for Pope’s to interfere in the day to day running of individual diocese, or in the life of the whole Church but this is as Vatican I’s  Dogmatic Constitution Pastor Aeternus indicates, something to be exercised when the unity of the Church is threatened, not the normal function of the Sovereign Pontiff. It obviously demands that the Pope is indeed a servant and bishops see themselves as sharing in his apostolic office, essentially being faithful bearers of the Tradition, they too are given authority to bind and loose, the difference is Peter’s role in maintaining unity amongst his Apostolic brothers, at no time except in the hundred years or so has he been an innovator.

"the difference is Peter’s role in maintaining unity amongst his Apostolic brothers, at no time except in the hundred years or so has he been an innovator."

This line sums up just about everything.

St Vincent of Lerrins definition bothers me a little bit. I would say whatever contribution that all people did was practice.

But Christianity looks routed by revolutionaries, and there are now bureaucrats trying to fill the roles of the old nobility. Arguably those that had the understanding legitimately had the authority.

Belief, if it comes at all, flows from practice.

The tendency to meddle with practice is likely to be very damaging.
When I listen to other people talk about God, they talk as if he is a human friend, powerful perhaps, but bound by space and time. The past and future are more real to them than He is.

May I add an Amen to your comment at the end, that Peter's role is in maintaining unity amongst his Apostolic bretheren. Yet, here we have the successor of Peter saying that he will no doubt be remembered for the division which he has wraught in the Church of God.
Indeed, he should not be an initiator but a unifier.

Are we seeing the end of the process which began around the seventh century and took off after 1054?

Had this not happened we would probably have seen an organic growth of the Church with new Patriarchates in north-west Europe, North and South America, Australasia, etc. As things turned out, Rome took all; the Pope developed into a monarchical institution. We might now be in what are the final stages of a direction which was taken 1500 years ago.

Where do the signs of the time point? The Second Rome? Or since that is now captive, the Third Rome, perhaps?

The problem with any mutual 'rapprochement' between the OF and the EF, is that any 'mutual enrichment' will rather resemble the peaceable nocturnal interaction of the fox with the hen.

One way the average Pat and Pam PewDweller can take the measure of a Pope's praxis is to use the definitional standard that can be found in the old Catholic Encyclopedia:

He is to be the principle of unity, of stability, and of increase. He is the principle of unity, since what is not joined to that foundation is no part of the Church; of stability, since it is the firmness of this foundation in virtue of which the Church remains unshaken by the storms which buffet her; of increase, since, if she grows, it is because new stones are laid on this foundation.

I have some questions.

1. You say that Cardinal Sarah does not understand what is meant by 'tradition'. What is his idea of tradition and what is your idea and where do they differ?

2. Am I right in saying that the liturgy of the Mass can develop organically? If so do the LMS and the traditionalists accept this or do they think the EF should always remain the same?

3. Was not St Vincent of Lerins talking about what we believe rather than details of the liturgy?

Having raised these questions - I am not a liturgist so I probably need correction.

However if the Mass is to develop organically we have a real problem in that instead of that happening we have had a bifurcation in the form of the OF and the EF. The OF does not strike me as organic development but as a complete rehash which as Cardinal Sarah says has led to serious abuses. Those abuses need correction.

If the EF is going to remain static then I do not think it will become much more widespread than at present.

I suggest that for the foreseeable future the vast majority of masses are going be OF. The OF is in desperate need of reform. First of all can we please have the Confiteor and not some mumblings telling God what he undoubtedly knows already. I need to confess and recognise my sins rather than telling God that he is merciful etc which sounds as if I hope he is going to forgive my sins without my confessing them. Then there are the words of absolution. I assume that those words absolve me from my venial sins and I make the sign of the cross and I notice one or two others in their dotage doing the same. Perhaps I am wrong about this? I suspect that most people in the congregation have no idea about what is happening at that point.

Next can we please have the full version of the Gospel and not some cut down version. If it means reducing the waffle in the average sermon then so be it. Further can we please have accurate translations of the words of God and not some Protestant inspired changes such as 'Happy' instead of 'Blessed' (the two words have completely different meanings) or animus translated as life instead of soul or do priests these days not believe that we, the laity, have souls?

Then at the consecration do please wake people up with a bell and then elevate the host and chalice properly facing East thus offering the sacrifice to God instead of facing the people and waving it about from side to side a la Kieran Conry as if to say "Well here it is chaps, believe it or not".

I could go on but finally can we please have the last Gospel and the Prayer to St Michael the Archangel back (think of all those days of indulgence we have been deprived of - I will be grinding my teeth in Purgatory at the thought). Also could we please celebrate important feasts of Saints. To-day we did get the full readings for St Joachim and St Anne but why not on others?

One way the average Pat and Pam PewDweller can take the measure of a Pope's praxis is to use the definitional standard that can be found in the old Catholic Encyclopedia:

He is to be the principle of unity, of stability, and of increase. He is the principle of unity, since what is not joined to that foundation is no part of the Church; of stability, since it is the firmness of this foundation in virtue of which the Church remains unshaken by the storms which buffet her; of increase, since, if she grows, it is because new stones are laid on this foundation.