The Orthodox would see a bishop con-celebrating Mass with his clergy as a sign that the bishop can do nothing without his his clergy, and therefore with his Church, it is an important sign that he is in communion with them as much as they are in communion with him. In many ways it is sign that he can do nothing apart from his clergy and the local Church. Con-celebration in the East is an important ecclesiological sign about the dependence of a bishop.

Cardinal Cañizares Llovera has often said that Con-celebration is not part of our Western tradition and that document on the liturgy in long gestation by the CDW which was supposed to be issued in July but is unlikely to appear at all now, was rumoured to clarify the use and theology of Con-celebration, which appeared after VII without any explanation or much understanding of precisely what was happening. We introduced an oriental practice and imposed it on our occidental Eucharistic theology.

In the West the same theology of the dependence of the bishop was actually signified by other rituals. the bishop could only celebrate Mass as a bishop when surrounded by his minister, sacred and otherwise. Pontifical Mass needed the sign of assistant ministers to take place.

One of the particular aspects of the Pontifical Liturgy was that the Pope literally could do nothing without help. The ancient Papal vestments signified this dependence. The sedia gestatoria used both by the Roman Pontiff, might well have ended by being a sign of medieval power rather than dependence but many other vestments such as the falda the long skirt like vestment that extended below the hem of the alb or the papal mantella, the long cope, meant that the Pope could not even walk without assistance. They were a sign to both Pontiff and the world that nothing the Pope did was done on his own. Far from being signs of the Church Triumphant they were actually signs that the Pope's actions were restricted and absolutely dependant on those around him. 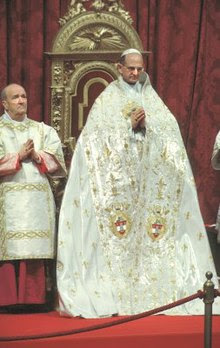 Again the roles of deacon and subdeacon are subsumed in concelebrations. It is an important reminder in the Extraordinary Form that all priests are also consecrated as deacons. I also like the idea that the priest is so potentially 'out of his mind' that he has to be led around.

There was concelebration in the West as late as the Papacy of Innocent III, who writes that the Pope is known to occasionally con-celebrate with some of the Cardinals. Yet these might have been Cardinal-priests and not Cardinal-bishops, a sign of unity with the clergy of Rome rather than some sort of extravaganza. Con-celebration as we have it now is quite novel.

Rad Trad,
What happened in the West is really unknown, even quite what Innocent III is supposed to have done, there simply are no written records.

Isn't the reference to Inn.III really a memory of what in those days what his predecessors had one done?

"Far from being signs of the Church Triumphant they were actually signs that the Pope's actions were restricted and absolutely dependant on those around him."

Interesting. The Tablet gets it wrong yet again.

Sigh, Paul VI looks fantastic. Every inch the leader of the Church.