The Sacristy Committee choose a vestment

I hate committee meetings.
The Sacristy Committee here are a hard-nosed lot, as bad as the Committee of the Masters of the Ceremonies and Senior Servers, they have read the books but they are not as bad as the Comptrollers of the Musicke who have read the books and continue to read more of them, especially on the London train and also have Graduale Triplexes, let us say only that they have 'Solemnes connections'!

I suggested that we should have a Year of Mercy set of vestments, after due consideration the above were rejected. The image, 'which to a casual observer might appear to be a two headed monster or even an abduction scene' was rejected. There was stern condemnation of vestments with writing on them, from 'S', our Inclusivity Adviser, 'because they will create a difficulty for the dyslexic'.

In its place the Sacristy Committee thought something a little more 'tranquil'. 'indicative perhaps of restoration to the Garden of Eden or the Resurrection', 'possibly something  that directed one's mind to the comfort of one's grand parent's sofa' might be more in accord.

'L' being a bit of Rigourist reminded the ladies and gentlemen of the committee that the Council (VII) had condemned vestments that depended on 'extraneous decoration' reminding us yet again of the need for 'noble simplicity', 'M' agreed, saying that the Council also stressed the importance of the intrinsic beauty of the fabric and elegance and simplicity of the cut.

Therefore the committee, after long discussion, approved unanimously the vestment below as being in keeping with our style of liturgy, suitable for both forms of the Roman Rite, having both a sense whimsy and at the same time a degree of nobility and it also incorporating many of the colours of the official logo.
I am happy to report that no silkworms died it its making. 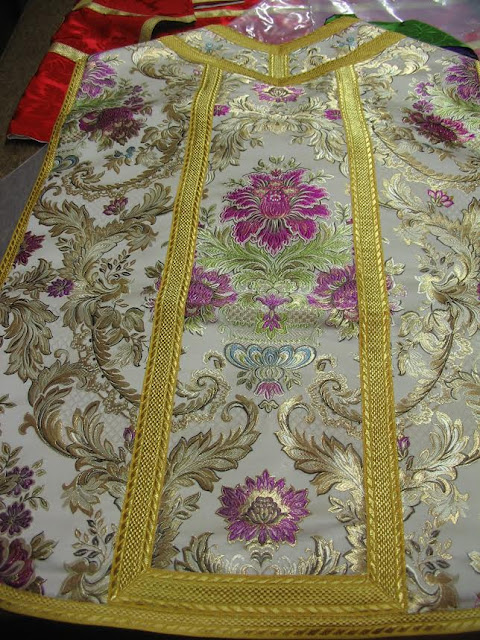 At the moment with a strong pound it is worth investing in the future.
at January 14, 2016

Ah, but surely you are blessed in your excellent Comptrollers of the Musicke, Father, Solesmes connections and all.

Brilliant, lovely. Thanks for the sense of humour.

'The comfort of ones grandparents' sofa' made me laugh and reminded me of a set of vestments I once saw in Lourdes in their now defunct museum. If I remember rightly they had been designed to be worn by Cardinal Roncalli to celebrate the Mass there in 1958 commemorating the centenary of the Apparitions. I thought they were truly ghastly and definitely looked as if 'grannies cushions'had been used. So-called 'Modern' vestments must have started at around that time. Even today's plain 'horse blankets are an improvement on those vestments.

What about the blue vestments which were shown last week? I thought blue was anathema for vestments. Yours are beautiful & very like a set in our parish

I see that the flower displayed on them is a prickly thistle. Do you have Scottish connections, or are the Committee trying to say something?

One slight problem - the vestment is all in colour: I want to know - why haven't the inclusivity committee considered the needs of the colour blind ? is not colour relative to the viewer ? just as morals are relative ? I shall have to report this. lol of course.

And so you went with the Vatican II style. Quite right. Well done, Father.

Father, if you think that's extreme - have a look round the vestments on display in the Matisse-designed Rosaire chapel at Vence.
Some examples (photos from the Chapel):
https://www.google.co.uk/imgres?imgurl=https://s-media-cache-ak0.pinimg.com/736x/fe/11/aa/fe11aacc0747f86517568503fccd2e21.jpg&imgrefurl=https://www.pinterest.com/pin/372109987939675514/&h=911&w=736&tbnid=ZuhNGsFwmEBzwM:&docid=1wIRVD_nRIG8MM&ei=2TGgVoLxFIKGU6bgsOgI&tbm=isch&ved=0ahUKEwjCwYqF3rnKAhUCwxQKHSYwDI0QMwgrKA4wDg

They're very.... colourful, aren't they.