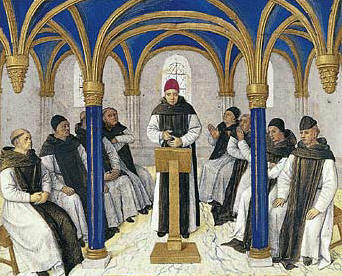 Having celebrated the Octave of Christmas, now we come to the season of the Pastoral Letters from bishops. It is a venerable tradition, that demands a high standard, the Pastoral Letters of  Apostles form part of scripture, the letters of early bishops form an important part of the Tradition. Bishop's letters are meant, as much as sermons, to change lives, probably more so because they come from a successor of the Apostles.

A correct Catholic understanding of the Liturgy of the Word sees the readings and most especially the Proclamation of the Gospel, not as a teaching moment but as theophany, a revelation of God himself. What follows the Gospel is analogous to what follows the offering of the Eucharistic Sacrifice; the distribution of Holy Communion. The Sermon or Pastoral Letter is an action, like Communion, which makes the Lord available to God's people, in a sense 'distributing' him or inserting him into the lives of his people. Sermons and Pastoral Letters are not about information but about Salvation, about feeding with God himself.


I heard of one US diocese where it is customary for a television to be placed on the Altar, sometimes in front of Tabernacle and for bishop to speak directly - well through the electrical machinery - to the people. There seems to be a lot of theological muddle here, not least that the whole point of having priests is that they are ordained to stand in the place of the bishop, celebrating the sacraments in communion with him and speaking in his name, and on the joyous occasion that the bishop should consider is important enough to write to his clergy and people they actually speak his words because the priest (or deacon) on these occasions is the bishop's logothete. He is the sign, not only of Christ but of the Bishop. It is 'reprobate' to use recorded music in the Sacred Liturgy, even more so is it reprobate to use recorded speech or film, even a bishop's speech. Few would ever dream of playing a recording of even the Pope's or someone else's most brilliant words in the Liturgy. Though I did hear of an Italian priest who at his daily Mass used a video of the Pope's Casa S Marta sermons until his bishop stopped him. In Argentina, apparently, a priest had Communion Services in which he recorded himself preaching and saying the prayers until the moment of Communion when a lay person went to the tabernacle, having been put on pause he was switched on to conclude with the post Communion and blessing, all on the TV.

One bishop who eventually resigned in disgrace issued an outrageously heretical Pastoral Letter on the Sacrament of Penance, following complaints from a few clergy and a greater number of laity the Nuncio, Abp Mennini, made him write again and because this was not much better, he was made to do it, a third letter, this time with a bit of help, the Archbishop gave after that.

Pastoral Letters, like sermons can do a great deal of good, although many people tend to suffer from fatigue listening to Father week by week Pastoral Letter are supposed to be heard. An elderly priest said it was a Pastoral Letter from his Archbishop, '... on those young men who stop their ears to a call from God' it made him listen to God, and eventually offer his life to work on the Missions. He said, 'when I eventually told Archbishop Amigo, he called me a 'traitor' as he had written the letter to promote vocations for his diocese, not for the missionaries'. 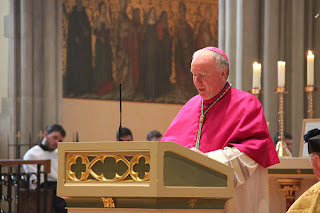 One of my parishioners is a student from Portsmouth, whenever bishop Egan writes, he is delighted and presents me with a copy. He writes powerfully, not just to inform but to change minds and soften hearts, to increase the faith of his people, to share is own faith and ultimately to save. It is very sad when the faithful find their own bishops' Letters so faithless and shallow, so lacking in learning and so uninspiring that there is a groan when it is announced.

Unfortunately we clergy, bishops and priests, are often boring people out of the Church or undermining faith through sheer tediousness! We can easily demonstrate how sterile our own faith is.

I could not help calling to mind Fr Ronald Knox's comment when a Bishop queried his use of a script while preaching - that the congregation had also been concerned - that they were in for another Pastoral Letter...

I was at a nuptial Mass recently where recorded music was used at several different times. You say that it is ‘reprobate’ to do this. Is the word in inverted commas because a rule about this is often ignored or for some other reason? And if there is a rule could you say where it is to be found. I would not like to point out that there is a rule without knowing where it comes from.

In my diocese each year we are subjected to a "recording" of the Bishop and more recently, others lay people giving "testimony" regarding our annual appeal. As a pastor I HATE playing it. We are directed to play it at the homily, but I can't bring myself to play it during the Holy Mass, so I play it before Mass. For some odd reason those who work in the High Castle (Chancery) think that this helps increase donations. Sadly, I think it just annoys people. Last year, for the first time we received not only an audio CD, but a DVD for those parishes with "screens" in the sanctuary (I don't know why anyone would ever do such a hideous thing). Maybe this year I will make a deal with my parishioners that if they give well I won't subject them to the audio message. Maybe THAT will increase donations.

http://www.ewtn.com/library/liturgy/zlitur59.htm see this.
It is not quite illicit but contrary to the idea of liturgy.

It's a shame that the church is run like a business wanting to increase donations.
Should not the focus be on increasing faith and piety among the people? Teaching Catholic doctrine which so many have forgotten?

I have heard traditionilsts assert that the readings at Mass are primarily addressed to God not the people, which makes no sense to me at all. But approaching the Scripture readings as "theophany" - proclaiming, announcing, revealing the presence of God The Word Incarnate - rather than being didactic as such, does make sense.

Nicholas,
Safer not to criticise

Father: Safer? Probably more a waste of time! On the other hand it is worth looking at President Trump's Christmas message:

No doubt many will dismiss it as totally insincere?

Having just looked at President Trump's Christmas message I still find it remarkable that half the American population think he is 'the best thing since sliced bread' while the rest of the world trembles for the future of the planet due to his election.

Pelerin: Like most of us there is good and bad in Trump. The media only concentrate on the bad.

Here in Washington, DC the cardinal’s voice ascends from a CD announced by the sound of angels—only time we hear chant, incidentally. I once spoke to a archdiocesan representative and he told me this method of soliciting has raised millions more dollars than before it was adopted. At that point, I thanked him for his time and said goodbye!

As a child I remember rejoicing in bishops' pastoral letters since they were brief and one was spared the usual boring sermon.

In the past 5 years our parish priest has read only 1 letter from the Archbishop. Copies are never made available. How is is that some priests (always liberal) can "get away" with anything and are never brought to book but one sentence of the truth of the Catholic Faith sends the hierarchy into apoplexy?