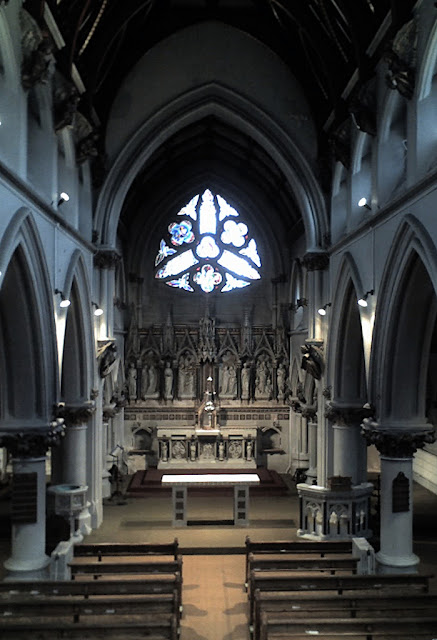 The Church in 2008
In the 1970s the altar was cut from the reredos, shortened and placed on the communion step, an "apron" was added to give space in front of the altar. For weddings and funerals several benches had to be removed.
The pulpit was lowered and one side was removed and destroyed.
The font was moved onto the sanctuary.
All the stone work in the church was painted white which quickly turned grey; capitals etc were painted with metallic paint.
The "linoleum" dates from 1950/60
The lighting system was installed  c1988 as a temporary measure. 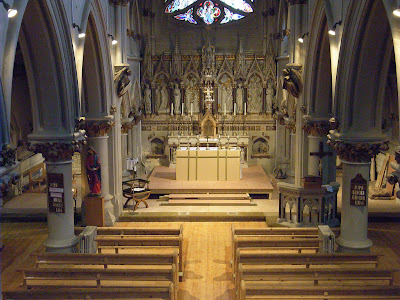 2009
The sanctuary was restored to its original dimensions,
the font removed,
the benches and floor sanded and re-varnished. 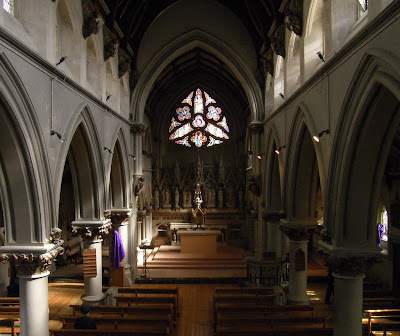 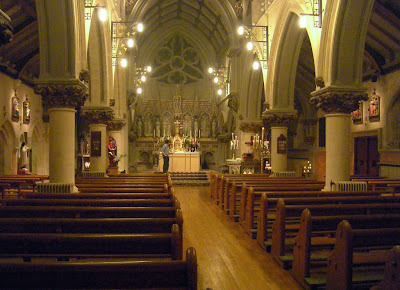 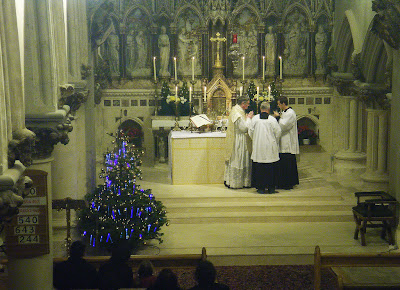 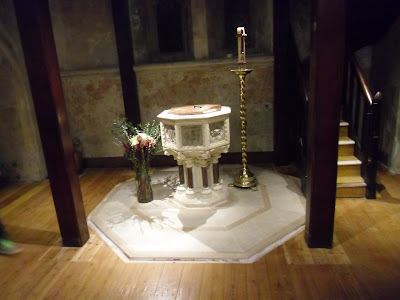 We are indebted to our architect Deirdre Waddington.


A postcards of the church c1890
Note the narrowness of the aisle, the apparent absence of lighting apart from candles in the sanctuary and the height of the original pulpit, which will be restored as an ambo. 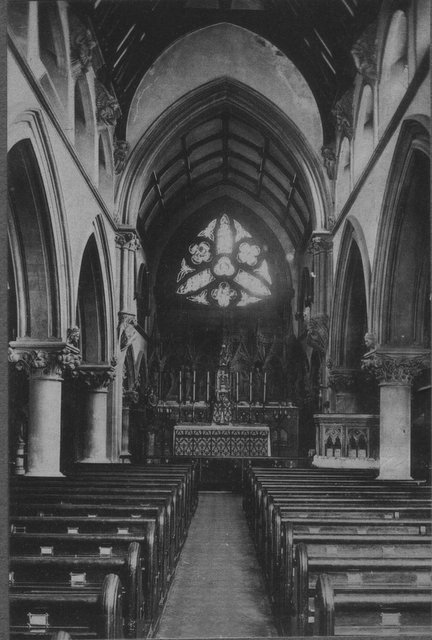 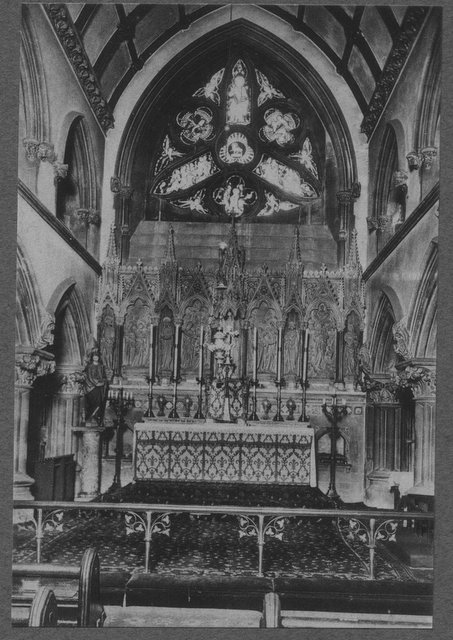 So when will the communion railing be replaced? :)

Incomplete. What are the Brit Bish's thinking?
Does Papa Benedict have to come down with direct divine orders to get things straightened out? Is so, I wish he would do it.

What a wonderful improvement Father , and such a lot of hard work has been put in .

Altar rails:
I am not sure there is room for them on the sanctuary.
However people are free to kneel, or not, on the front kneelers which have been brought slightly forward of the benches.
I am surprised how many people take up this option.

Fr wish you were our PP he is in the proess of vandalising an old intact church, out with the old and in with the new

Oh please, Father! Do put Altar rails in! I'm quite sure there is room for them! Make the Sactuary 'sanctus' again please!

I look forward to visiting for Mass one day.

A gentle enquiry. The updated photographs seem to show reliquaries on the altar - apparent also in the photograph of the candles being lit. Am I correct in thinking that this is directly contrary to the norms of the General Instruction of the Roman Missal, which I believe still state that only those things necessary to the celebration of Mass should be on the altar. Does this apply to the Extraordinary Form as well?

Michael1,
Interesting observation, from time immemorial relics have been placed under, over or on the altar. On great feasts we do put relics on the altar, in a sense to "increase" the signs of holiness.

Are they a direct contradiction of the GIRM? Presumably not as they are placed on the altars of St Peter's from time to time, similarly the altar of Westminster Cathedral. The reliquary heads have never been displaced from the altar of the Lateran. Presumably relics are seen as an "extension" of the relics within the altar.

Interestingly those who complain about relics on altars don't seem to mind about flowers or an other old rubbish such as spectacles, pieces of paper, booklets, "art works".

The EF? Look at the tradition and the way in which altars were/are used. Although really relics, candles, statues, flowers, even the crucifix are placed on the gradine leaving the mensa itself free of clutter. However when there is no gradine these things end up on the altar.
The rubrics include instructions on incensing relics along with the crucifix.

If they are kneeling on the kneelers provided for HC - then I would take it as a sure sign from above,for the replacement of the Altar Rail.

You have done a wonderful job there Father Ray.

I saw this work in progress a month ago, and it is simply magnificent. The light fixtures (always difficult) are highly successful.

That all this tremendous work and expense is mostly 'merely' a restoration shows the extent to which taste and good sense imploded 40 years ago.

Now almost every other church in Christendom awaits your guidance and inspiration, Father!

Maybe the answer is in the old pics. An altar rail with a central gate could be constructed along the edge of the sanctuary and hassocks placed on the nave side.
An EM of Hassocks (not the town) could be appointed, responsible for placing and removing the central hassocks for access and egress of the celebrant (lol).
Seriously, I reckon it could be done if the celebrant's chair were to be moved slightly towards the altar. The central gate section could be left without kneelers for those who wish to receive standing.

Just a note - the GIRM does not encourage flowers on the altar: it says they should be nearby rather than on the altar. The GIRM seems opposed to clutter of any sort, presumably including some of the things you mention, while nevertheless not making too much fuss about what is already part of the fixtures and fittings. Portable reliquaries are different from those cemented (or whatever was used)into the fabric. I confess to a personal preference for simplicity on the altar itself, to keep focus on the central elements of the Mass - but it's an interesting debate.

Michael1
I think the GIRM was written, like the rubrics, with the understanding Mass was said ad orientem in which case all the clutter, including candlesticks and crucifix are before the priest and congregation but on the gradine not the mensa.

I like the idea of nothing but the missal vessels and necessary linens on an altar but once the candles & crucifix are there all the rest might as well follow.

Without the proximate presence, a few inches away, altars look bare and irreverent, or at least penitential. We are conditioned by our heritage and artistic cultural sensitivities, they are important.

The church looks beautiful. Is there a Lady altar , Fr. Ray ?

Yes, there is a Lady Altar, the should be pictures somewhere on the blog.

It really is looking so much better now than it did a few years ago.

It would be even better if those old altar rails were still in place.

Dear Fr Blake
Well done!
Keep on restoring all things in Christ our new born King.
As you are aware: He is pleased and will not forget what you do for Him.
Savio

It really looks wonderful and the sanded floors give such an impression of lightness....congratulations to everyone, especially the architect.

Father, it looks great! My congratulations to you, your congregation and your architect.

I find it much easier to pray in a church that looks like this than to pray in a cinderblock barn with felt banners on the walls.

If other Catholics are like that, I think you've done a lot to help people in your flock to pray more and better. Perhaps Fr. Z's "fix the liturgy, fix the church" idea starts with fixing church buildings this way.

Again, my congratulations. Kansas is a long way from London, but perhaps I can see your good work with my own eyes someday.

Congratulations on all you have already achieved with this restoration, which I hope continues to receive funding. It has been a genuine pleasure to see progress as it has been made on my visits to St Mary Magdalen.

Is it charitable to say that I hope those responsible for these church rapes (and yours is not one of the worst examples, alas!) are pounding sand in Purgatory to pay for the expensive partial restoration of the destruction they wrought?