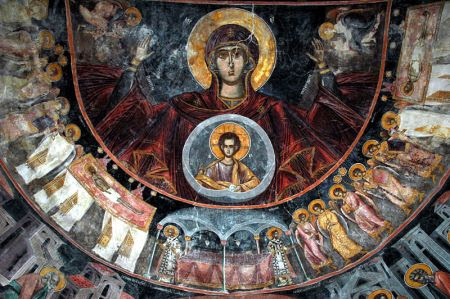 David could not build the Temple of the Lord, although he was the Lord's Chosen One, he was a sinner, "a man of blood", an adulterer who had stolen Bathsheba and had Uriah killed, and he killed his own people too.

A sinner could not build a house for the Lord, lest the House itself was poisoned by sin. It is Solomon who chose wisdom rather than wealth or power who builds the Lord's House, though he himself loses God's favour after the Temple is built.

The Temple is a type of Mary, who is uncontaminated by sin, she is also the Spritual Vessel, the Vessel of Honor, Singular Vessel of Devotion, Tower of Ivory, House of Gold, Ark of the Covenant. She contains Grace himself. She is full of Grace, highly favoured, the Blessed amongst women, the Lord is with Her. She is the Immaculate Conception, the House which the Lord himself has built, there is no stain of sin within her.
She was chosen before all time, and from the first moment of her being was free from all sin, so that she might contain the Body, Blood, Humanity and Divinity of Jesus Christ.

Mary is the fitting Spritual Vessel, the Vessel of Honor, Singular Vessel of Devotion, Tower of Ivory, House of Gold, Ark of the Covenant to contain her Son, she alone.

The Body, Blood, Soul, Humanity and Divinity of Jesus Christ which we are given us in Holy Communion is not some lesser Body, Blood, Humanity and Divinity of Jesus Christ than she carried, it is the same unchanging Christ. Hence St Paul tell's to examine ourselves before receiving Holy Communion, lest we eat and drink our own condemnation.
Mary is our model, she alone was worthy to contain Jesus Christ, we at least must be free of all serious sin and must have a real hatred of sin to be receive  Christ. The Grace she receives is entirely God's gift.
at December 18, 2011

"She was chosen before all time, and from the first moment of her being was free from all sin, so that she might contain the Body, Blood, Humanity and Divinity of Jesus Christ."

She was free from all sin, so that she could survive direct contact with the life-giving Spirit of God.

Since God's holiness and justice demanded the death of the sinner until Jesus' death satisfied that demand for all humanity, proximity to the Divine Presence was lethal.

That is why two of Aaron's sons were incinerated when offering 'strange fire' before the Lord, and why the High Priest had to fill the Tabernacle with incense so that he would not see the Divine Presence (kevod Adonai) and die.

That is also why Mary could not have had other children after Jesus: her womb would have been lethal to them. After all, to this day, observant Jews will not set foot on the Temple Mount for fear of trepassing on the place where the Divine Presence once rested.

Interesting thought Fr: that we should share (in some small way) Mary our Mother's favour when we receive Holy Communion (in that we imitate her carrying/ holding/ possessing Christ).

The 1962 Devotions (after communion) exclaims as an act of Confidence: 'Behold, I am now in possession of the Sovereign Good.' It's interesting how in communion God possesses us (He receives us) but He also becomes such that He allows us to 'possess' him - if only materially and superficially, He still becomes such that we are able to possess and commune.

I echo Aron's comments: that thought is very inspiring Father.
And thanks for your own very interesting comment Aaron.
One of my school friends was chastised by the nun teaching us Religous Knowledge for saying she "envied" the Virgin Mary; I do now understand what she was trying to say.

Keep talking like that and you will save souls and wind up in Heaven.

May you forever remain in the Immaculate Heart of Mary, “Mother of the Priest par excellence, Our Lord Jesus Christ, and through Him, of all priests in whom she forms her Son”.

Fr Ray
The Feast of The Immaculate Conception was always held as a day of Obligation, in my time as a youth.It is a terrible shame that this beautiful Feast of Mary, on the 8 December, is not honoured as it should be any more. Of course if one considers the beauty and importance of The Vessel, The Ark of the New Covenant - Mary must be understood as perfection itself. Who else could be chosen to be the Mother of Jesus Christ?

The preparation of the New Ark of God's Covenant began at the time of Mary's being, in her own Mother's womb - St Elizabeth.

Our Blessed Lady teaches us so much - if we would only listen to her. Lourdes, Fatima, Czestochowa, Guadelupe, Rome etc. So many opportunities for mankind to listen and learn. But do we?

Blessed John Paul II had a special devotion to Mary. Totus Tuus. He completely gave himself as a Priest, Bishop, Cardinal and Holy Pontiff to serving God through Mary.

The Holy Rosary is a beautiful way to immerse oneself in the Immaculate Heart of Mary.

Mother of God, Mother of mine, Mother of the World and Queen of Heaven and Earth. Could any one ask for more when praying and being close to our Blessed Mother?

The inward excellence of Our Blessed Mother is so perfect that it shines with the power of God, to the whole world. The Immaculate Heart of Mary is so beautiful that the warmth and rays of holiness can never be overcome by evil.

When we receive The Lord Himself in Holy Communion, we too can feel this power and beauty.

How great and special must have Mary felt when she said 'Yes' at the Annunciation? She was willing to serve God without understanding what was being asked of her.

I suggest that we should listen to what The Lord is asking of us - just as we carry The Lord after receiving Him. Whether we fully understand or not.
We are also vessels - but of a different kind. The Lord is with us in His presence - do we really understand the complexity and mystery of Holy Communion?

Surely, this must be one of the greatest gifts that The Lord has given to us.
FrP

Gigi, thank-you for your comments.

As a note of interest, the division I understand between jealousy and envy is thus:

To be jealous is to fear losing something: ergo Exodus 5:5 'for I the Lord your God am a jealous God' may imply that God 'jealously guards' those His Sons and Daughters lest we should fall captive to the Evil One.

We might say that we rightly desire to imitate the Blessed Virgin's virtue for the praise and glory of God (desire in the proper, ordered sense of the word).

Anyway, may God Bless and may the Blessed Mother of God intercede for us. A

I understood Mary's mother to be St Anne?

Sorry of course it is St Anne.

My senior moment is to blame.
Please accept my apologies.

I wonder what St Anne and St Elizabeth will say to me one day?
(please God)

Did you get the names of the women mixed up???

Now you know why as a celebate priest, I find living alone the good answer. I would be in too much trouble if I got the names wrong.
God Bless
FrBT