Have the Arians Won? 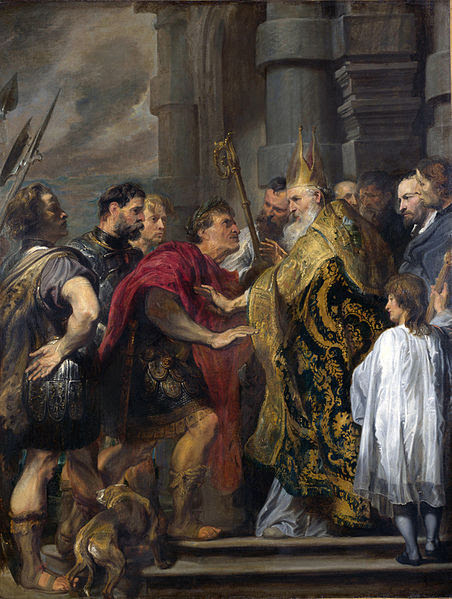 I am sure it is not by accident that we have two Saints who fought to defend the divinity of Christ in the first week of Advent. St Nicholas's legend tells us he tore the beards of Arians at the Council of Nicea and Ambrose confronted an Arian Emperor and an Arian court.
Arianism says that the Son is less than the Father, he was not born before time began, that hence the Nicean Creed proclaims


... one Lord Jesus Christ,
the only begotten Son of God,
begotten of his Father before all worlds,
God of God, Light of Light,
very God of very God,
begotten, not made,
being of one substance with the Father;
by whom all things were made;
who for us men and for our salvation
came down from heaven ...

Pope Francis speaks of Pelagianism or neo-Pelagianism but Pelagianism is the fruit of Arianism. If Jesus is less than God then his example rather than his Divine power becomes more important, it is our response to him rather than his Grace that becomes stressed, our response to him becomes more important than he is. His teaching becomes a memory of the Church rather than the dynamic power that remains with the Church until the end of time. He becomes a historic event rather than present Presence.
So have the Arians won? Is Christ now more a moral example rather than a living Presence.
If we believe sacraments are empty of Power that they are tokens of Christ, then we are probably Arians.
If we believe God is distant that our prayers are not heard, that there is a great gulf between us and God, then we are probably Arian.
If we believe that the Word of God is about giving a moral example which only a few can fulfil rather than something which is life changing with ease if we are open to Grace, then we are probably Arian.

Anything which tends to reduce Jesus, is Arian. Part of our fallen human nature is to dethrone God, to trample him in the dust, to crucify him. In the West, especially, we have a tendency to chip away at Christ's divinity, to reduce to our level rather than accepting he takes us to raise us up to his level. to being Sons. As he is by nature we are made by adoption, but because he is God-Man.
at December 07, 2013

I think we are inclined to imagine that there is a general collapse of Christianity in the West including the Catholic Church. I think this is wrong and what we are really seeing is the slow collapse of Protestantism which is a form of Arianism over the last 150 years. It affects us in the Catholic Church to the extent that some of us have erroneously moved towards Protestant beliefs. There may be parts of the Catholic Church which will fall over the edge with the Protestants but the true Church will survive and flourish.

"Since Christ Himself has said, 'This is My Body' who shall dare to doubt that It is His Body?" -
(St. Cyril of Jerusalem)

ONCE
THERE
WAS
A
FATHER

Once there was a father
Who loved his little girl
He held her hand and walked to Mass
So she could see the Pearl.

The world can give you silver,
With gold it can entice
Diamond, topaz, rubies
But none can match Pearl’s price.

For every drop of blood He shed
Gave us the faith to trust
And made us rich in sacrifice
To give you Bread not crust.

And for awhile sometimes we stray
Believing not in Creeds
But when things don’t sustain our souls
Then turn to Pearl that bleeds.”

Failing father said he wished
“For every time…a penny,”
He heard the daily words so rich
“…be shed for you and many.”

The little girl she cried
Raining on his bed a flood
But father saw her sacrifice
“Your tears are crystal blood.”

Once there was a father
Who loved his little girl
He held her hand for his last Mass
But left her with…the Pearl.

What is your evidence that the Emperor Theodosius was an Arian? From what I have read he was a supporter of Nicene Orthodoxy and indeed summoned the first Council of Constantinople. The reason St Ambrose excommunicated him and refused to allow him to come into his cathedral in Milan was because of the slaughter of civilians in a city in Thessalonica which the emperor had been besieging. Fr Ashley Beck

Brilliant piece, Father. I went to Confession tonight and the priest, while imparting spiritual advice, told me not to fear approaching the Eucharist because it is a meal. Ok. Fine. I worried after having been given that particular insight so much so that I tried to recall if I'd actually heard the formal words of absolution pronounced before I exited the confessional.
Does wondering what the heck is going on these days make me an Arian?
"And darkness covers the people..." Isaiah 60:2

What of those who ask "what would Jesus have done?"

"If we lack faith, hope and charity we are probably Arian" sounds like a reductio ad absurdum.
I would guess most Christians (including those you probably have in mind, Fr.Blake) believe that Christ is both human and divine, that the Church is both the mystical body of Christ and a human institution, that the mass is both a sacrament of the real presence and a communitarian celebratory meal (like the Last Supper), that we need to be still in order to pray etc. etc.
Arianism as a recognisable tendency within the Church is obsolete. The tendency of some Catholics to brand others as heretics in order to congratulate themselves for being the only truly orthodox ones is sadly (and diabolically) all too alive.

Liam said: Does wondering what the heck is going on these days make me an Arian?

It would seem your confessor's faith has flat-lined which I think is a side-effect of the Novus Ordo, especially where it reached its most stripped-down protestant peak. but that's the thing with inventions, they become obsolete. Now the post-council 'caretakers' of the NO are trying wring the last few miles out of this 'reliant robin'.

A tiny minority of baptised Christians believe all that is required by the Faith, most of the baptised have not received the necessary cathechesis and do not practise the Faith. Then there are those who may attend Mass but have apostatised. There are a huge number of priests and bishops who no longer have the Faith, and so they do not teach it. I can identify with Liam - it's hard to find a confessor who recognises all sins as sins, or who will tell one that one may not receive Our Lord in the Blessed Sacrament if one has not confessed all mortal sins.

@Viterbo - I like the Reliant Robin analogy but perhaps a better analogy is an Ansaldo product, an Italian engineering company with an interesting record.

Excellent article, of course.
Arianism denies the equality, and, therefore, the Divinity, of Christ. Many Catholics are Arians, in such thoughts as "Jesus was determined by His culture and therefore could not make women priests." (heresy) "Jesus was bound by the Jewish culture and therefore continued the patriarchy". (heresy). "Jesus did not appoint popes". (heresy) AND so on.

The idea that Christ is not Divine minimizes all the teachings of the Church and leads to such nonsense, as I have heard from Catholics both in England and in the States.

That Christ is True God and True Man forms the basis of all Christianity. Yes, there are Arians today....

Great thread Fr Ray. I tend to see the Catholic Church as Protestantising more and more. An Arian milieu that has led to Communion in the hand which has led to some Bishop's allowing for adulterers to receive Communion - it's a wafer symbolic of a meal after all..., what God? Sacrilegious Communion - what's that?

I see the Church at this time as the Titanic sailing full speed towards the iceberg, though some of us will get off on the lifeboats.

Also, I see Bishop Athanasius Schneider as St Nicholas and St Jerome. If only he could get a red hat.

Arianism, in essence, attributed everything to Christ, except Divinity. Pelagianism, (always denied by Pelagius, to be fair) also denied the Divinity of Christ. Therefore Pelagianism derives from Arianism.

The intention of the liberal/Modernist Reformers, after Vatican II, was to deny, or at least to downplay, the Divinity of Christ. The introduction of Holy Communion in the hand, for example, administered by members of the laity, that is emHCs, was part of their technique. Turning the Mass from a re-enactment of the Redeeming Sacrifice of Calvary into a commemorative meal was another. And, how well they have succeeded. Just observe any New Mass in the UK today.

Now Pope Francis claims that there is a Promethean Neo-Pelagianism afflicting the Church today, and he is right. It is to be found, not in orthodox Catholicism, but in the liberal/Modernists, who downplayed the Real Presence, and the One Triune God, who have denied the reality of Sin, and who have placed their own judgement above that of the Magisterium, and who believe they will reach Heaven by their own efforts, without Divine assistance, and without the necessity of the Grace of Christ.

Yes the Arians are alive and well in today’s Church. But they will fail, thanks to the Holy Ghost, just as they did in the fourth Century.

Another St Athanasius will arise.

I agree with you 100% Father that the denial of the Divinity of Jesus Christ is at the centre of the crisis we face across the Church, but I think strictly speaking it is Nestorianism that has triumphed just now. The Arians, as far as I remember, thought that Christ was a heavenly being, the first of God's creatures and therefore less than the Father. The Nestorians taught that Jesus is a human person who is very close to God so we can see the Divine Word at work in him in a particular way. That is what I think many people think and teach about Jesus today. As you say, we can admire such a Jesus and try by our own efforts to emulate his example, but we cannot adore him nor can we be saved by him and brought into personal communion with the Blessed Trinity.

"The Nestorians taught that Jesus is a human person who is very close to God so we can see the Divine Word at work in him in a particular way."

Not really. The Nestorians taught that in Jesus Christ there are two persons, the Divine Logos and the Man Jesus, united in a "moral union" or "union of wills" (i.e., the will of the Man Jesus was always in accord with the will of the Divine Logos). The Nestorians were thus able to call Jesus "God" in a way that the Arians were not. (Similarly, the contemporary "Assyrians," who deny being Nestorians although regarding Nestorius as a saint, while rejecting the word "Theotokos" of the BVM, nevertheless term her "Mother of Our Lord, God, and Saviour Jesus Christ." Cf.: