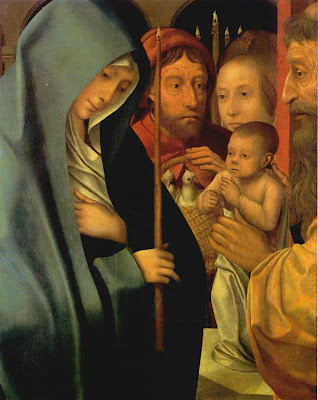 I get annoyed when candles I have taken a great deal of effort to bless, that are supposed to be an icon of Christ and symbolise our wisdom and burning faith are just left in the pews or at the back of Church, especially as we hand out rather expensive 'altar' candles rather cheap little votive ones.

The problem is of course that Candlemas is a not very important feast in the present liturgy, which in our electrified times is not surprising, candles are not really necessary in church today and no-one spends most of winter making them.

Dr Rock that great nineteenth century Southwark priest, antiquarian and one of the founders of the V&A, makes a point somewhere of the disastrous impact of the Protestant Reformation on bee-keepers. Before the Reformation they were concerned more about the wax than the honey. He tells of great Paschal candles weighing several hundred-weight that that were kept alight from Easter to Ascension, they were so tall that they had to be lit from clerestory.

Wills often contained bequests for candles to be lit before images and shrines, the kings candle burnt at Walsingham, its extinction marked the end of Catholic England, just the same as Bloody Bess' command to the monks of Westminster when they met her on her accession at the Abbey door said, 'Gentlemen, we have day-light enough, there is no need for your lights', gave a clear indication of what was to come.

The use of candles at the Easter Vigil seems to undermine this feast, or at least duplicate one of its important rites but of course in more ancient times, the candle blessed at Candlemas would have been used at the Vigil which occurred on Holy Saturday morning, as well as practically every other procession people took part in, the most important of course, or at least the one most people connected with, was the procession of the dead from the Church to the cemetery after their Requiem as well as either greeting or being part the procession that would accompany the priest bringing Viaticum. The reception therefore of the candle at Candlemas was a sort of ticket to take part in other religious rites.
at February 01, 2014

Whoa! Do you mean to tell me, Father, that you provide the candles? Here in my parish in Cork we must bring our own candles to Mass for the priest to bless on Candlemas. I suppose, since we must purchase our own candles over here, that's why we have so few left in the pews.
(Just as an aside, I once belonged to a parish in the States where blessed palm crosses were distributed gratis to all on Palm Sunday. There were many many left behind in the pews after Mass. One enterprising parishoner would gather up the remnants and weave them into straw hats which she wore to baseball games in the summer.)
In any event, my own family (and the Church too once upon a time) designated this Feast of the Presentation as The Feast of the Purification, the latter designation being the one more evocative for me. Just sayin'.

A friend, from Poland, tells e of their custom to keep their baptismal candle. This candle accompanies that person throughout his/her life. It is lit at marriage, and at their requiem.
There are so many occasions to use a blessed candle - in my case when I was ill and received the Blessed Sacrament at home it accompanied Father from the front door, and remained lit until the prayers were over.
But then I was an adult by the time of V2 and the subsequent dumbing down of a lot of Roman Catholic traditions!

Perhaps, Father, a catchy tun during Mass might enhance the intrinsic value of the blessed candles? Transform it into an "I gotta have one of those" moments.

No Liam!
It will be
http://youtu.be/8VTnzxppVYk
but sung a lot better, together with Mass IX

Indeed you are correct, Father. No comparison:

Gertrude,
As far as I am aware, parents in the UK are still presented with their children's baptismal candles. All of mine certainly were, and they were not all baptised in the same diocese, so I assume it's fairly universal. These candles have been placed very carefully away, in their 'baby boxes', along with all those other bits and pieces that get collected as the years go by, to be handed over when the time is right e.g certificates and cards from First Confession, First Holy Communion, Confirmation etc.

Perhaps someone can confirm this.

Liam, out of curiosity, where in the HADES was that parish in the US where the morons left behind the palm crosses, and then some other idiot made hats out of them? RIDICULOUS!!! In the parish I went to for YEARS you'd be hard pressed to find ANY left lying around. Indeed, one for one 5:30 PM Palm Sunday Mass I arrived extra early just to make sure the "Palm situation" was in hand. It wasn't. The IDIOTS at the 12:15, didn't leave a SINGLE ONE for the 5:30 people, and I would have dearly have loved to have rung the necks of the ushers who "forgot" there was a 5:30 Mass. Being prepared for JUST such an occasion I made liberal use of the Palm Fronds in the sanctuary, and hauled a few of them back in the sacristy to to a hasty job cutting the fronds off so the people at that Mass would get some, because of the greedy b******* at the previous Masses had grabbed them all. Anyway, WHERE WAS THAT PARISH? Were they raised/instructed by wolves? Sounds like something those idiots in Massachusetts or San Francisco would do.

@gemoftheocean,
I shan't name the parish, but it was in Pennsylvania and it was in the mid-1980s.
Don't be too distressed. The straw hats kept this person from getting too much sun on her noggin (thus preventing further deterioration of her waning mental faculties) and, if you want to stretch a definition, might even have been akin to wearing a sacramental.
Peace.

The story about bee-keeping is in The Stripping of the Altars; and Elizabeth I to give her her proper name was famously parsimonious and strapped for cash upon accession. I suspect her remark had everything to do with expense and nothing at all to do with prejudice. Not least because many of her own courtiers and employees believed her sympathies actually lay with the Catholic Church.

I was baptised last year as an adult and have my candle. The priest suggested I light it on the anniversary of my baptism.

I think the good Dr Rock pre-dates Dr Duffy by some 100 years!

B. Bess might well have had few cowered Catholic employees but her vicious persecution belies her real attitude.

Liam, I'm really sickened. But perhaps you are right about the palms keeping that woman from getting her brain fried even more. Sounds like it must have been Philly, or P'burgh if she was wearing them to the ball games. Sheesh. The 80s had a lot of nasty going on.

@gemoftheocean,
Philly or Pittsburgh? No. Somewhere in between.
Don't forget 'baseball' games in the States run the gamut of Pee Wee leagues, Babe Ruth leagues, American Legion leagues, parks and recreation leagues, high school leagues, university divisions, minor leagues, and, of course, the professional 'big leagues' within which the Pittsburgh Pirates and Philadelphia Phillies were members.
So many Pennsylvania baseball teams. So few straw hats.
Peace.

Wish I would've read this a few weeks ago. We actually had a splendid Mass with procession that morning at my FSSP parish, and the miscreants in the pews actually returned them to the boxes in the back to await Easter Vigil.

That said, what a sad lament you've written for the modern world. I've often wished that at the latest I'd been born in 1820, and fallen asleep on the eleventh day of the eleventh month ninety-four years ago.