I don't watch the BBC, indeed I do not own a television receiver but I have started watching on the BBC IPlayer the Crimson Field, it is about a WWI group of nurses in a field hospital, it isn't that horrific, no scenes of screaming vomiting gas victims crying out in agony. In fact he patients are remarkable quiet but there was one scene that disturbed my comfort, it was a bucket of amputated limbs.

That gave a fresh perspective to Pope Francis' description of the Church not as any old hospital but specifically as a field hospital, operating in a war zone. If you are hearing a lot of Confessions it can sometimes be like a supermarket cashier or a triage surgeon in a field hospital, making quick judgements, cutting out an infection here, giving a dose of morphine there, applying a splint for some else, offering kindness to those dying of their wounds. The 'field hospital' model isn't only about just one specific area of Church but the whole life of the Church, for those at work in such an institution the basic tool historically has been the saw and the knife. Cutting out infection, cutting off the gangrenous, crude tools maybe but the Pope is not talking about a sophisticated urban hospital. 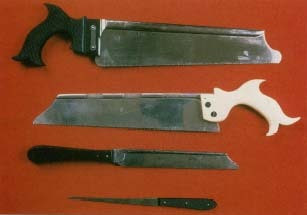 The ultimate sanction in the Church is always amputation, or excommunication, it is done not just as a way saving the sick individual but the rest of the flock as well. In fact a field hospital out of the time of a major battle seems to have dealt with diseases like typhus or cholera the result of insanitary living conditions and bad food. Remember all those stories of all rats living of the detritus of war. The nurses of the Crimea were as much concerned about the  contagion of disease as much as battle wounds. Those 'leperous courtiers' can infect the rest of the court, leprosy is contagious. Yesterday the very stark reminder of Cardinal Mueller was issued to the American Leadership Conference of Women Religious which basically called them to get back into the Church because what they are doing now is leading them out of communion.

A good Pastor is desperately concerned about the health of his flock, just as a medical officer in charge of a field hospital is not merely concerned about battle wounds but such mundane things as latrines and their correct use and clean linen, fresh water and washing, waterproof boots and clean socks, the provision of soap and lavatory paper, the elimination of vermin and the delousing of uniforms. He might also be concerned not just about the physical health of his soldiers but even their psychological and even moral health. 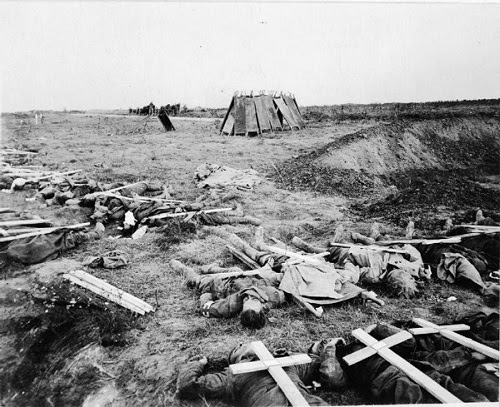 The purpose of the field hospital is worth bearing in mind it is to get the sick well again to engage the battle once more. No Pope has spoken in modern times in such apocalyptic terms as Pope Francis. The first Mass he celebrated with Cardinals after his election, he said 'if you are not praying to Christ, you are praying to the devil' and this dichotomy between Christ and the devil has been present throughout his pontificate.

Some see a growing dichotomy between truth and unity. One of the problems some people identify in today's Church is that sense that we are one big happy family and we don't say or do things that are hurtful. A field hospital is not a place without pain, whether it a surgeon cutting off a diseased limb or a nurse taking off a blood and pus dried dressing or pouring disinfectant over an open wound. Bishops, priests and deacons do not like dealing with pain, it is all too easy to simply ignore the cries of the suffering, to become hard of heart or else never to apply the knife and simply watch the patients die a slow death, in that case we become a hospice for the terminally ill rather than a field hospital. The problem here is that both patients and medical team die not just of their own wounds but of cross infection from other patients. So what does one do if some mad honorary Prelate denies the Resurrection, or a Professor of Catholic Studies, from a Department of Human Flourishing suggests that scripture and tradition are wrong about human sexuality, our custom has been to ignore the problem. Scripture warns against the father who fails to correct the waywardness of his children, and those who fail to correct the errors of their brothers. St Paul was not afraid to correct the Prince of the Apostle, Pope Francis is continually complaining about careerists, airport bishops, nun's who are old maids. There is an intolerance in his sermons that is not just about evil but about imperfection, and all too human weakness, not just of clergy but of ordinary Christians. He speaks of mercy but it is not the self indulgent mercy of what he describes as the "pastry-shop Christian"

I have always thought it significant that he hardly ever describes 'God as Love', for our days perhaps that has too much secular baggage, the implications of a God who is 'merciful' is that mercy has to be sought, it is given by a greater to a supplicant. God is loving but God is also angry, in the theology of St Paul it is only Jesus who assuages God's anger, only then is he merciful to those united to Jesus..
at May 06, 2014

I like the "Field Hospital" analogy and feel it is a sound Christian one. I think Pope Francis has mastered the media quite brilliantly by understanding you have to be 'liked' to be listened to and get a good press! This has enabled Catholicism to have a powerful, new voice and puncture corners of the World that have been deprived of it's message for years. Now the Honeymoon period is wearing off I expect the secular media to turn on him as they discover they haven't got the 'Liberal Patsy' they thought they had! Hopefully he can keep them fooled for a few more months and continue to spread the message before he get's rumbled!

My uncle enlisted in the US Army at the time of the Korean War when he was just 18 years old. He had had severe juvenile diabetes from the age of 13 and my Grandmother prayed he wouldn't pass the physical. Of course, if you had a pulse you passed the physical. My uncle did.
Although he wrote to my Grandmother from Korea saying he drove a Jeep delivering the post to the troops, he privately informed my mother he was a machine-gunner on the front lines and later vividly described the times when the Communist Chinese troops, wild with drugs and many in the front ranks without weapons, charged at his position until he ran out of ammunition.
Any way, when he was later discharged he would often speak of those few of his own soldiers who would shoot themselves in the foot or hand or wave their leg above the trench hoping for that 'million dollar wound' that would get them sent to the field hospital where they would get the same attention as those severely wounded in battle.
He would say that some of the self-inflicted wounded were pleased with themselves for what they'd done and some few were even so bold as to try to get a Purple Heart for wounds received in combat.
Sorry to have rambled. My uncle died of complications from malaria contracted in Korea and Type 1 diabetes.

Speaking of Field Hospitals, for those interested, here is a series of clips from the George C. Scott film, "Patton". Patton's slapping of the G.I. in the (Sicilian) Field Hospital is at 1:40 of the clip.

Now here is a clip to rouse the troops! Substitute 'Catholics' for 'Americans', add a few other changes and pass this on to Pope Francis.