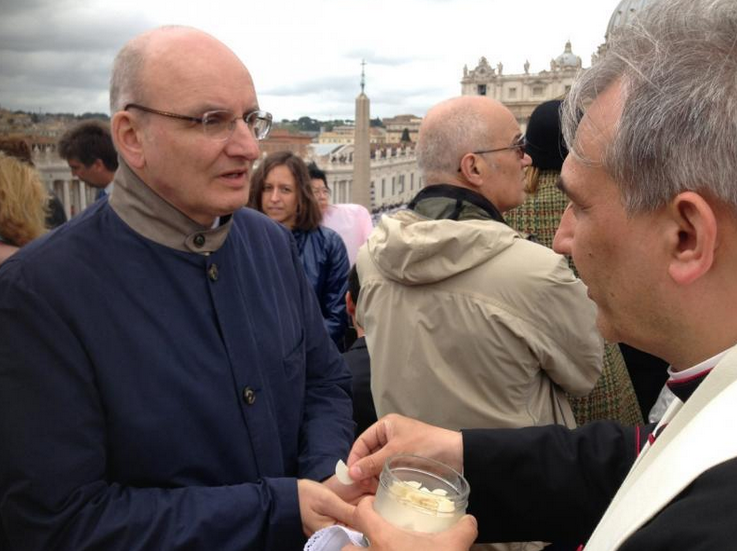 The Holy Father famously doesn't want to be a renaissance prince but some of his courtiers are certainly behaving in style which is not too far away from that.

Immacolata Chaouqui organised her own little party for a select few on one of terraces overlooking the Ptazza of St Peters during the Canonisation of St John XXIII and St John Paul II. Holy Communion was distributed from whiskey tumblers by Lucio Angel Vallejo Balda, secretary of the Vatican's Prefecture for Economic Affairs and member of the investigative commission of economic and administrative offices of the Holy See, obviously not one of those 'leprous courtiers' the Pope has spoken about. Well, a whiskey tumbler is an improvement on the plastic cups used at Rio, it would have nice if he could have bothered to find a rochet or cotta just to show he took things seriously and wasn't there to serve the canapes.

Afterward the Canonisation whilst the plebs tried to find a pizza Immacolta had organised a buffet which apparently cost about 18,000 euros! 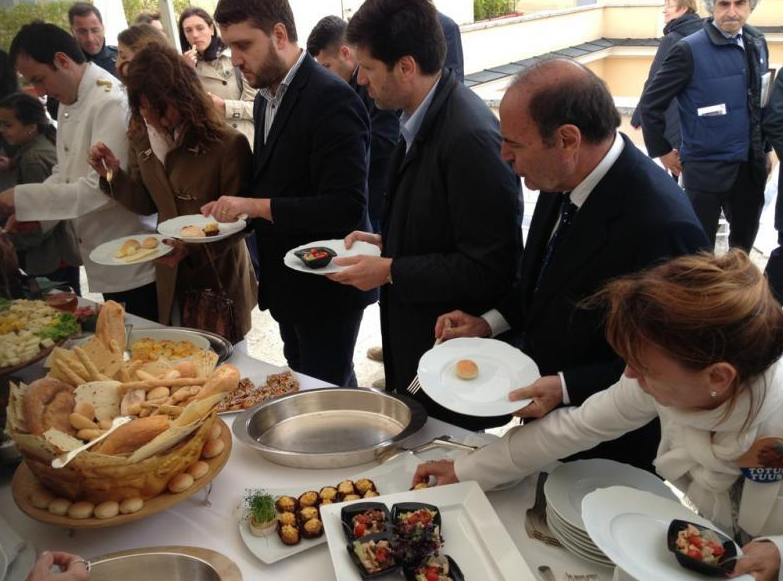 Immacolata has form.  She is a 27-year-old public relations consultant who works for Ernst and Young, she described the Vatican's Secretary of State, Cardinal Tarcisio Bertone, as corrupt and claimed that he was involved in dubious business deals with an unnamed company from the Veneto region. In other twitter messages she fuelled speculations over Pope Benedict XVI's resignation, saying he was seriously ill, and claimed that former Italian finance minister Giulio Tremonti was a homosexual.

It seems that if one is on the inside one can get away with anything, it is those on the peripheries, like the FFIs who are made to suffer! For all Francis' insistences and complaints of corruption and privilege it just carries on, now, as an Italian journalist friend says, it has executives from multi-national companies involved.

Well, who are we to judge!

Father, you didn't say that Cardinal Versaldi, on the roof of whose Prefecture this event took place, spoke to the Pope about it and said that "the Pope, to use a euphemism, wasn't very happy about it".

Do you reckon that's what he said about the FFI? Will Inmacolata Chaouqui and Vallejo Balda be facing the same sort of music?

I understand that Ernst & Young (or EY as it now calls itself) has been appointed by the Vatican to advise on internal organizational matters, as have other professional services firms.

At least a whiskey tumbler is bigger than an egg cup! I watched a video yesterday about the work of some priests (not in England)and the oldest one featured celebrates his private Masses using an egg cup for a chalice and it did not even appear to be silver. He is an avid collector of egg cups but I presume he wasn't joking.

God does not belong in whisky tumbler, who are these sickos, no wonder that many have no objection to Lord Jesus being given to mortal sinners they have no faith. Sickos!

Father: About the FFI you give a link to Lionel Andrades' blog whose thoughts I find pretty impenetrable. Of more interest is the report on Rorate Coeli that the relevant Congregation has imposed a visitor on the Franciscan Sisters of the Immaculate. So far I have not been able to discover any reason for this but previously I believe Father Volpi accused them of influencing the Brothers in some way - presumably promoting traditionalist ideas.

I am convinced that if we all fervently prayed five decades of the Rosary every day, and spent an hour a week in front of the Blessed Sacrament for their intention, the FFI would be immediately released from their travails.
We often speak of important goals such as the Conversion of England, and an end to mass abortion. But if we do not resolutely storm Heaven, they remain pious wishes. What would happen if we were all to take concentrated daily prayer seriously and publicly unite our intentions? The bishops could not stop us...

How sad to have to say "The bishops could not stop us" It just shows the times we live in. It's so so sad . . .