Archbishop Martin criticises one of his young priests 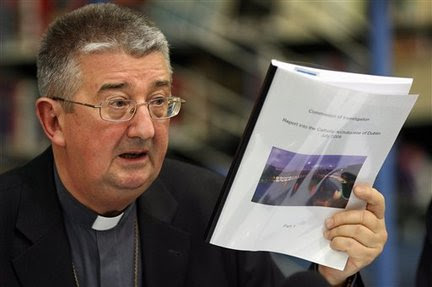 There is always a dark-side to the The Tablet, so maybe this report about Archbishop Martin of Dublin criticising one of his very few younger priests should be taken with a small pinch of salt but His Grace does have form  of being critical and unsympathetic towards his younger priests. That of course could explain why he has so few of them, and possibly why his diocese is so unattractive to young men who might have a vocation. It is obviously indicative of a poor management style and could well be a reason why the few young priests he does have might well be considering looking for bishops elsewhere in the world.

His comments made in Australia (what was it His Holiness said about 'airport bishops'?) seem indicative of a management style in the Church that would be unacceptable elsewhere and I would expect was one reason the abuse scandals were not addressed in Ireland. As there are so few young priests in the Archdiocese of Dublin it is not too difficult to identify who this individual actually is. Priests should certainly not be breaking confidences, the onus on a bishop not to do so is even greater, everything that has been said over the last 50 years about the father/son relationship of a priest to his bishop seems to be negated by the Archbishop's remarks. If a son of his is fearful or disconcerted about the actions of the Pope, and many are, it is a bishop's responsibility to give him the support he requires. Pope Francis has often spoken about the evils of gossip, especially clerical gossip, it seems that this young priest has been betrayed by both his Parish Priest and his Bishop, who see a problem rather than seeking to understand and help.

Many young priests are indeed disconcerted by this sudden lurch back to the 1970s, the rise of the personality cult of Francis, with the implications of a new-Ultramonatism, or at least a Church where the Pope is the sole arbiter of  everything, is indeed alien territory for many younger priests. It is not the faith they have been taught in the seminary, or in the catechism, or in the ordinary magisterium of St John Paul II or Benedict XVI, the fact that an Archbishop seems to greet this with incomprehension bodes ill indeed for the future of his Church, especially when so many Prelates, even those who are designated 'the Pope's theologian' seem to be teaching something contrary to the Lord himself.

Recently the Pope said if a priest has a problem with his bishop he should go and sort it out, even it means a shouting match. Well it is even more incumbent on a bishop to sort problems out with his priests, rather than do as Archbishop  Martin has in the case of this young priest, both his age and status demand this of him.
What is not acceptable for any bishop is gossiping or complaining, either to other priests, which is bad, or as appears here, to a group of laity, who then report his words in the press. No wonder Dublin has such a poor reputation for the pastora care of it priests.
at August 05, 2014

This snide attack by the Archbishop is typical of him vis-a-vis those who uphold the Deposit of Faith and the Natural Moral Law. He is addressing his associates in the secular world or in the Church who oppose Church dogma and Divine Law. Those persons who abide by the unchanging Faith and objective morality are marginalised and maligned or persecuted by those in power in the Church in Ireland. We, the Faithful, are well used to the slurs against us by the self-styled progressive bishops and priests from their secular Media pulpit. This is nothing new. Daily fare. St John Vianney intercede for us. Blessed Michael, the Archangel, defend us in battle . . .

Of course young Priests are going to be:- “so locked into a past model of priesthood” he commented and said this manifested itself in “the way that they dress up, the way they celebrate Mass, and in their views." These are the only men who will have the generosity of heart to offer their lives to God as Priests. Modernism has nothing to offer!

A link to the Tablet, how brave! There is no doubt the the young priest in question would recognise himself in this attack. I would not describe myself as having “a very conformist and closed Catholicism” and almost every "off the cuff" remark by Pope Francis worries me.
It is one thing to preach a gospel of forgiveness but another to encourage moral indifference.

And yet Archbishop Martin is silent about the sacrilegious compromise with baby-killing through abortion in Mater Misericordiae Hospital...

I might have been somewhat more impressed if ++Martin;s comment had NOT drawn such a speed response from the so called Association of Catholic Priests

torchofthefaith: Absolutely right. Archbishop Martin has some questions to answer about that Hospital and its apparent acquiescence in abortion. What is he going to do about it? We have been waiting some months.

Unfortunately, the Archbishop's view is not uncommon in Ireland. In my home parish newly-ordained priests and Deacons who are placed there for parish experience are invariably referred to as 'rigid' or 'open'.

Of course, given the current climate, that may be changing...

Frankly I am incredulous that he still has his job. Given his slim record of achievement he would do well to talk his priests up not down. Thank goodness Silverstream Priory is in Ireland offering welcome and prayerful support to the Irish clergy.

And where would we be without the Tablet and our liberal leaders being inconsistent. One minute Pope Francis is their darling, the next they totally ignore him:

“It’s so rotten, gossip. At the beginning, it seems to be something enjoyable and fun, like a piece of candy. But at the end, it fills the heart with bitterness and also poisons us,” Feb 16 2014

Why would a Catholic young man, answering the Lord's call place his life in the hands of a father like archbishop Martin? This type of dysfunctional fatherhood runs deep in the Church and it's effects can be seen everywhere. Here in Australia, the diocese of Sale, we saw and witnessed the treatment meted out to Fr Speekman by Bishops Jeremiah Coffey and Christopher Prowse. Yes, this is the same orthodox priest whose homilies are read by people around the world at homiliesfromaustralia.bogspot.au. Since his removal, the parish in Morwell and practically the whole diocese have been in terminal decline. At the end of the year the last remaining orthodox priest will be leaving the diocese for the oratory in Brisbane. When bishops act as dysfunctional fathers the whole Church suffers. Greg Kingman

I suppose it's all down to who it is that dares to question the pope and, of course, who the pope might be.

@Gregkanga. Sorry to read about the diocese of Sale. Here, in the West, the seminarians that I know from both our seminaries, are fine orthodox young men and I thank God for them. The outlook here is very hopeful and we have two well filled seminaries.

All through the so-called Child abuse crisis the Arch bishop of Dublin was very vocal. Rarely if ever any encouragement for the vast number of his clergy who were quietly going about their priestly duties.
I am not impressed by him at all.

@Father Ronan Kilgannon,
I agree the Archbishop positively bellowed in the media during the 'child abuse crisis' but when it came to admonishing Catholic politicians of their de-facto excommunication should they vote for last year's legislation which would permit (for the first time) abortion in Ireland, the Archbishop was scandalously mute.

It's infinitely easier to bang-on in the public media about the scourge of clerical child abuse when one is certain the media will be four square behind such a stance, than it is to castigate politicians for facilitating abortion, an abomination universally lauded in the media.

If the virtue of fidelity is now seen as "rigidity and conformism", then may the Lord grant me a spine of high tensile steel.

The prelates who model their faith on jellyfish are the epitome of the walking dead and there is no wonder that they inspire no vocations. To turn virtue into vice is a true mark of the devil.

Not good. Not good at all.

So Sad for that Young Priest who has been betrayed by his "spiritual father. So sad. Extra prayers for him this evening.