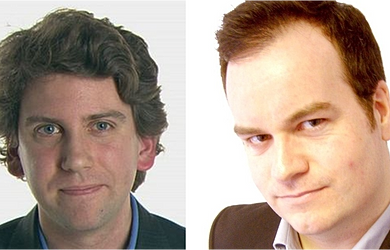 It was announce last night the debate between Tim Stanley and Brendan O'Neil in Oxford University, about the effects of "abortion culture" has been cancelled. From what I understand the pretext was the venue, which is not in use tonight for any other function, was not booked properly.

The reality is that Christ Church JCR really wanted to curtail freedom of speech, the debate wasn't even about abortion but its effects on society. It is truly shameful that in one of the greatest universities of the world should be afraid of debating even, “This House believes that abortion culture harms us all”.

What a shameful reflection on what has become of a great University, once a bastion of freedom of speech and expression! How perverse, frightened and cowardly are the JCR committee!
at November 18, 2014

Shameful indeed. 'Not booked properly' seems a pathetic excuse which nobody will believe.

One of them "Think Tanks" must have had second thoughts.

From one of the students who protested:

"The idea that in a free society absolutely everything should be open to debate has a detrimental effect on marginalised groups ... It may seem harmless for men like Stanley and O'Neil to debate how and if abortion hurts them; it’s clearly harder for people to see that their words and views might hurt women ....

Access to abortion impacts the lives of women, trans and non-binary people every day, and the threat pro-life groups pose to our bodily autonomy is real, not rhetorical."

Shades of the future in our free and open liberal democracy. How very, very far we have fallen.

An earlier successful debate in the University of Oxford earned the comment,

That debate, in 1933, was widely held to have encouraged the Second World War, perhaps the greatest specific catastrophe in human history. The members of the JRC Committee should be aware that they at least equal their earlier colleagues of that time, in infamy.

Abortion and its companion evil contraception, are destroying the essence of our Western Society, obsessed as it is with personal indulgence.

Above all, our young and not so young demand unlimited and uninhibited sex and if they slip up for whatever reason well there’s always a simple solution, Abortion, the killing of the living viable Human Foetus in the woman’s womb.

It is estimated that there are circa 40 million induced abortions in the world each year, about about the same same number as killed in the whole of WW11.

And the University of Oxford (JCR Christ Church ) refuses to debate this!

What a strange world we live in.

Piers Corbyn suffered a similar problem a couple of weeks ago

Disgusting. I hope Cambridge can do better.

To "perverse, frightened, and cowardly" should be added pusillanimous.
If it is the JCR Committee which decided to cancel this, they are showing what children they are. It may be the decision was forced on them. But being among the elite of the elite University, they should be ashamed. Their cancellation of the debate appears to put the most affirmative answer to the motion which will not be discussed now: that the "abortion culture" does harm us. It is only those who have no right on their side, who have to resort to force to impose their will.

Marquette University in Wisconsin, USA, has chosen not to support free speech within its class discussions on the ethics of same-sex "marriage"! It is a "Catholic University", Jesuit controlled. See article:
https://www.lifesitenews.com/news/student-banned-from-criticizing-gay-marriage-in-class-at-jesuit-college?utm_source=LifeSiteNews.com+Daily+Newsletter&utm_campaign=c8cf67f41d-LifeSiteNews_com_US_Headlines_06_19_2013&utm_medium=email&utm_term=0_0caba610ac-c8cf67f41d-397687069

Cardinal Newman in his The Idea of a University gives the model of a place for a free exchange of ideas, which the modern freethinkers are enslaving to the freedom to conform only to their new notions. This is encapsulated in our anti "hate speech" laws in the wider world. Even in Communist countries, the University was a place where freedom of thought and speech was so essential, that the police were never permitted to enter. But here in the free Western world, we care nothing for such medieval institutions now, even if we are part of them.

Happy Jack's quote from the student who regards 'the threat pro-life groups pose to our bodily autonomy being real' demonstrates perfectly the one-sided attitude of those who support abortion. No thought at all of the threat to the baby's 'bodily autonomy'.

Happy Jack asks what a non-binary person is. I had no idea (I thought it was something to do with computers) but on looking it up discover the following definition:

I am surprised the student did not use the word 'androgynous' which is a more familiar term. Why replace it with 'non-binary?'

Incidentally if I were 'non-binary' I would object strongly to the definition of 'something else entirely.' But I suppose they have to cover the possibility of defining any Martians who may land here.

Jacobi - the 1933 debate about not fighting for king and country.

Both Oxford and Cambridge were hotbeds of betrayal. That said, the overwhelming majority of most of those who were students at that time did their duty when the time came. The trouble is that they were, and remain, intellectual playgrounds were people are free to think irresponsibly, and that extends particularly to the SCRs who are happy to accommodate more mavericks of a certain type than is good for them.

I am the child of single mother. At the age of 45 I got to know my father. I would be dead if born within the cultural context many endure now. The final solution for prebirth babies is an assassination. Abortion obliterates the baby.
My body is a fusion of both my parents. It is as unique as their bodies. A mother whose says I chose not to use my body to nurture my baby within my body is the same as the mother who refuses to nourish the child outside their body. The child is an individual in the process of life just as the mother. What happens to mothers or parents who don't nourish a child.. who kill it? They are murderers. I am my brother and sisters keeper. If I do not defend my brother or sister when they are unjustly abused I take part in the sin.

Look Oxofordians have not learned natural law philosophy for years.

Most could not argue themselves out of a paper bag.

We should create our own forum in the Church for rational debate.

There is too much weakness on our sie as well, from those who argue subjectively rather than objectively.

Personally, I think these debates have to be considered passe.

By the way, where are the great Catholic intellectuals who can actually argue for life from theology, Tradition and philosophy?