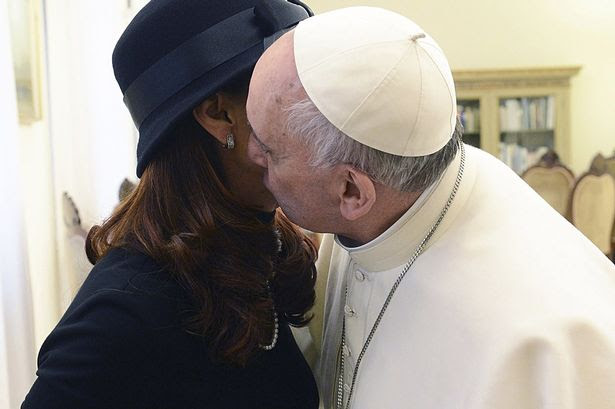 I am pleased the Pope has gone out the peripheries to gather Cardinals, I am pleased that the Catholic Church is loosing its European edge. We have to admit it but the Church in Europe is ineffectual and therefore dying.

However, I take pleasure in being a little uppity when Anglican friends speak of the 'Roman' or 'Roman Catholic Church' because for us 'Roman' means the fons et locus of unity. For them it is a word that signifies a certainly national identity, a denominationalism, like the use of 'England' in the 'Church of England'. I love to point out that even in Italy there are Ambrosian Catholics and Greek Catholics, and in the world at large there are a dozen different types of Catholics, all sharing Catholic doctrine and all in communion with the Roman Pontiff but not of the Roman Rite and that the Universal Church is a communion of local Churches. If I am feeling particularly mischievous I will even point out that not all Popes have actually been 'Roman' Catholics, one or two have actually been Greek Catholics and a few Ambrosian Catholics.

I have been rather intrigued by Fr Hunwicke's posts on the Roman Curia; his point being that patristic identification of Church and Bishop; that power rests in the Bishop of Rome precisely because he is the Bishop of Rome, his subsidiary point is the Cardinals and Curia are significant because they are, or stand in the place of, the clergy of the Church of Rome.

In his Regensburg address  Benedict XVI said that Greek thought was a significant part of Christian revelation, that we cannot, without harm, separate Christianity from the thought of Plato or Aristotle. With a third non-Italian Pope in a row can we forever suggest that the Pope should not be an Roman or even an Italian without in some sense damaging the authenticity of the Roman Church? Is Roman-ness important to the Church? When the Cardinals take on their most important role as the bishops, priests and deacons of the diocese of the Church of Rome are they looking for a Bishop of that city who would or should be elected by the Roman Church or are they looking someone to govern the entire Catholic Church

Reading the accounts of the somewhat eccentric machinations of the President Kirchner, and revelations about the prosecution of Fr Volpi for libeling the family of the founder of the Franciscans of the Immaculate, there seems to be cultural connection, a rather heavy handed uncompromising politicking. I am left wondering how much cultural baggage the Papacy can actually take.

A couple of our mothers were talking about the Pope's words on disciplining children, they were rather horrified at the idea of anyone, let alone the Pope, suggesting slapping a child, I couldn't help wondering what their reaction might be to an African or Asian Pope's attitude to juvenile correction. The thing is that an Argentinian Pope brings an Argentinian culture to the office, in the same way a Pole or a Bavarian brings his own culture to the office. I presume the next Pope will be African or Asian, in theory this good but in practice it separates the Bishop from the culture of the Church.

According to your own diocese it is the 'Roman Catholic Diocese of Arundel and Brighton'. Are you not part of that?

Cranmer,
Yes, because we are of the Roman Rite.

There is concern about the outer skin, the appearance, when the apple is rotting at the core . A misdiagnosis I think.

An injection to cure the core first, and if that is successful then we can look further outwards.

The Catholic Church is the Church instituted by Christ, and entrusted to Peter and His Successors, the Keeper of the Keys and incidentally the Bishop of Rome. We must get that, the core and its Continuity right first.

Fr I read Pope Benedict in a different way. The Truth is the Truth with or without the help of Greek culture. Certainly their developed reasoning helped them to receive the Truth with greater conviction because there is no contradiction between Truth and reason. That I believe was Pope Benedict's point. There is nothing Greek about the power to reason. It is a universal power of rational minds. Certain cultures darken this faculty. The Greek culture was helpful in its promotion. For this reason Christianity had a welcome reception. Pope Benedict's pointing to the Greco Roman culture was simply a point towards natural reasoning, nothing more. To suggest the Catholic Faith, which is supernatural, has an indispensable root in a pagan culture is unacceptable I would think. I have no Problem with any Pope from anywhere so long as he holds the Catholic Faith. It is a universal Faith and so is above all cultures. If pope Benedict did mean what you say he meant I would be inclined to think that it would not be the fact that he came from Bavaria that led him to his position but that he had a false understanding of the nature of Universal Truth.

The mother who expressed surprise at the Pope's support for smacking as a form of correction is simply infected by the stupid world she lives in. The same world that recoils in horror at smacking for correction but will poison, scald and chop up a child in the womb for convenience. The merciless stupidity of evil is enough to make one sick.

Ma Tucker, what you say is the truth - always and everywhere.

I thought that we are of the "Latin Rite" and that the adjective "Roman" was imposed on us by the English when they separated from us. Perhaps it would be more helpful to start calling ourselves LR Catholics because it's an automatic reminder to everyone - Catholic or not - that there are other Rites that are just as authentic as our own.

I always tell my friends I am RC. Regular Catholic.Tridentine Novus Ordinariate all is acceptable provided it is done well.

I don't like Catholics referring to themselves as "Roman Catholics" because it suggests we are just one more "denomination". The overarching term is just "Catholic", which is synonymous with Christian, the faith held and taught in its fullness by the Catholic Church but in a partial or fragmentary way by non-Catholics. If we need to distinguish within the Church (as between Latin rite, Greek, Syro-Malabar, Maronite etc.), we might then use the term "Roman".