When we had Truth 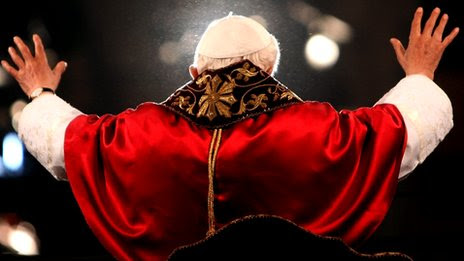 I have been trying to write something about the nature of  Truth for sometime, I've written hundreds of words and yet failed to be precise, or else it has ended up as a bit of an uncharitable rant.

When Pope Benedict resigned his coat of arms with its motto "Cooperatores Veritatis" was taken down and it seemed that there was a sea-change in the the Church, many seemed to have come to the conclusion being "co-workers of truth" was no longer very important, Nominalism with all the Relativism that Benedict had turned his back on suddenly returned.

Truth was front and centre of the Benedictine pontificate, and along with it a certain intellectual precision and a desire to define precisely what we mean and what the Church believes. This type of precision was always at the heart of Ratzinger's ministry, it was there in his time of Prefect of the CDF. I think a great turning point occurred with his commissioning of Cardinal Schönborn to produce the Catechism of the Catholic Church. I remember speaking to a seminarian who said, "Until the Catechism was published in 1994 we were told any old rubbish was Catholic teaching, then we were able to check for ourselves. It was amazing the effect a copy of it in a seminary class room on even the most way out lecturer". Therefore 1994 became a significant turning point, when 'the faith' was placed in the hands of ordinary Catholics, rather than something which was claimed by 'specialists'. Another great turning point was Dominus Jesus in 2000 which brought precision to our christology and ecclesiology.

Benedict's pontificate was a search for truth that animated countless Catholics, I suspect this was one of the reasons for the rise in numerous Catholic citizen journalists and the flourishing of the Catholic blogosphere. More importantly I believe that it gave rise to a culture for transparency, openness and accountability in the Church. Benedict made it possible for us to ask the simple question, "Is this true?" and to expect an answer, He gave us a point of reference to understand that there were not many truths but one Truth and that this Truth is the Incarnate Word, the 2nd Person of the Holy Trinity, Jesus Christ himself an objective and real presence that should be at the heart of the Church. For Benedict a denial of Truth was a denial of Christ himself, an obfuscation of it an obfuscation of Christ, a lack of clarity about it, a lack of clarity about Christ.

Truth for Benedict  was the disinfecting sun-light, it was the answer to corruption and self-seeking within the Church, as much as it was to false teaching or to obfuscation or a lack of transparency or on a more mundane level bishops covering up child abuse, financial corruption or lobby groups, gay or otherwise, or plain heresy.

The idea of Truth being at the heart of the Church or of a Papacy was perhaps incomprehensible to the media as much as it was to Pontius Pilate.


Jesus answered, "You say correctly that I am a king. For this I have been born, and for this I have come into the world, to testify to the truth. Everyone who is on side of the truth hears My voice." Pilate said to Him, "What is truth?" .... John 1: 37-38

Truth is important to the Church, because above all we are called to be convincing witnesses. Liars do not make good witnesses. If in any sense we are found to be untruthful then obviously we lose credibility and so does Christ. To have absolute truth as an aspiration places the Church on a different level to the politician who though he may not exactly tell untruths, manipulates and shades the truth and uses it as tool rather than worshipping it as an icon of God himself.

It is worth reflecting on what Andrea Gagliarducci has written recently and its impact on Truth. What is the point of the Church if we merely have a place at the table and fail to bring the Truth which is Christ?

Excellent, Father. Almighty God is worshipped in Spirit and in Truth.

"But sanctify the Lord Christ in your hearts, being ready always to satisfy every one that asketh you a reason of that hope which is in you." 1 Peter 3:15

Had Pilate not turned away from Jesus after having asked "Truth? And what is truth?" Our Lord might have repeated the words He had spoken to Thomas:

Incidentally, Father, Pope Benedict XVI noted in his series 'Jesus of Nazareth' that Jesus' use of "I am" in John 14:6 left no question that He was claiming that same divinity as was declared to Moses when God spoke from the burning bush:

Liam, I am so glad you have quoted: I Am Who Am". The modern version "I Am Who I Am" diminishes, imo, the straightforward statement of Being into a declaration that any human, particularly of relativist persuasion might say.
Father, thank you for this thought-provoking piece.

"The Truth will set you free." Benedict brought the fresh air of freedom into the life of the Church for a brief while. Where there is no love for Truth then only dank, dark, dreary oppression prevails.

Take a simple question as to whether Pope Francis was right in quoting Paul VI about the Congo nuns.Has Fr Lombardi convinced us that it was a remark Paul VI truly made?

Does this mean there was no Truth in the Church before or since?

Before or since what, Debra?