During the referendum campaign, not only Catholics but many others referred to the principle of Subsidiarity and giving it as a reason to 'repatriate' powers from Brussels to London. Some people quote subsidiarity as a principle for democracy, with a preference for national or local democracy.

This is a misunderstanding, that much under-rated pope, Pope Pius XI in Quadragesimo anno, (79) says:


It [Subsidiarity] is a fundamental principle of social philosophy, fixed and unchangeable, that one should not withdraw from individuals and commit to the community what they can accomplish by their own enterprise and industry.

Thus it is about personal autonomy and empowerment, and about the respect that is due to the individual and his rights and dignity.

This very Catholic principle of subsidiarity, based on our very Catholic understanding of human nature, which is neither Capitalist or Socialist, just Catholic, is based on the gospel idea of fraternity, and caring for one's neighbour. The loss of it diminishes us.

Taking away autonomy from individuals seems to be one of our major social ills, it is perhaps one of the reasons young people are likely to take to the streets rather than the ballot box or the hustings. Dare I suggest that one of the reasons many British Muslims, who also seemed to vote Brexit, in the Midlands and North East feel alienated and are prone to radicalisation is the lack of subsidiarity.

Dis-empowerment seems to be an important factor in mental and social health of our country, The referendum showed a country divided. There is gulf between the elite and the masses, the powerful and the powerless, the fat-cat banker and the family that queue at the food bank, the comfortably housed and the young couple who will never own a house and can barely afford to rent one, or the parent who has to send their child to a school where he or she will be introduced to a gang sex and drugs culture because they lack the autonomy to escape their environment, or as in the picture the mega-rich Bob Geldorf (and the late Jo Cox) yelling insults at out of work fishermen. 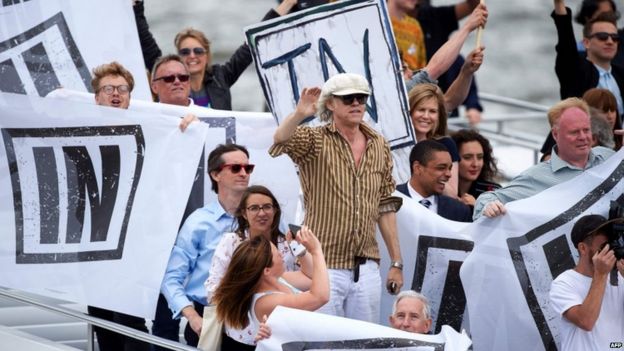 There is social divide in the UK. The welfare state creates a sort of lingering dependency while the rich asset strip and de industrialize the UK going to cheap labour markets to rip them off. Those they used are left with bad teeth, drugs, broken relationships and sexual promiscuity as an opiate.
Poverty is a tool and it falls on those who are not able to be used by the moneyed. There are also those that are exploiting the UK through economic immigration as they are rapacious.
International capital cares nothing for countries, ethnicities, cultural memory or truth that gets in the way of its use without obligation of human resources.
Sadly the British are good at it. leaving the EU will allow Britain to trade freely with non EU countries.

The state is a hoover of rights and duties. My objection to free school meals for all primary children is that, while it is good to feed those raised in hardship,it is nonetheless a duty of parents to feed their children and the state has no business doing it if the parents can do it themselves.

“Caught in the trap of a terrible industrial machinery, harried by a shameful economic cruelty, surrounded with an ugliness and desolation never endured before among men, stunted by a stupid and provincial religion, or by a more stupid and more provincial irreligion, the poor are still by far the sanest, jolliest, and most reliable part of the community.” Chesterton

The CCC also reminds us that subsididiarity has a social dimension.

The teaching of the Church has elaborated the principle of subsidiarity, according to which "a community of a higher order should not interfere in the internal life of a community of a lower order, depriving the latter of its functions, but rather should support it in case of need and help to co- ordinate its activity with the activities of the rest of society, always with a view to the common good."

Yes, of course and many people wrote about that pre-referrendum and the tendency is to see subsidiarity purely in social terms. I think what Pius XII is suggesting that it is sine qua non for us to be truly human, not just a 'good' but a 'necessity'. for human society, and for a mature truly human person who is involved with -loves- his brother.

Maybe I'm seeing too much here but the CCC, excellent as it is, does reflect the rather foreshortened theology of Schoenborn and his collaborators - but maybe I shouldn't criticise a Dominican to you.

Reaching a bit with the dis-empowerment/empowerment observation you've made, Father, it appears that Pope Francis is anticipated to empower Lutherans to receive the Holy Eucharist at Catholic Masses. At least that is what Sandro Magister reports here in L'Espresso:

"Communion for All, Even Protestants"

If such is the case, I'm certain Martin Luther would wholeheartedly approve.

Father the problem is threefold - a) subsidiarity is neither the CCC version nor your inadvertent misrepresentation of it by not including the intrinsic axiom in rerum novarum of solidarity justice with the final end of the common good - subsidiarity is NOT a proscription against all and any act act which the individual CAN perform solitarily - if it were it should be thinly veiled libertarianism. b) Virtually everyone has been so subsumed into Enlightenment thinking that they have forgotten that I) there is only one freedom - to be and to do good II) Rights are not personal entitlements but rather the duties and obligations of the collective to an individual III)the only fundamental inalienable right is the inviolability of innocent life upon which all other 'rights' are appellant c) The violations of the 'safety net' framework of the welfare state inducing a workshy underclass dependency culture - was not a machination of the social democrats but the friedmanite monetarist capitalists who fraudulently reduced unemployment rates by placing those unskilled who lived where unskilled labour was not required on artificial incapacity benefit - it is not that the socialist ideal is wrong because it enforces equanimity and denies predilective inequality - it's also because socialism cannot survive where original sin thrives

'Socialism'? The mere mention of it reminded me of this:

"We make this pronouncement: Whether considered as a doctrine, or an historical fact, or a movement, Socialism, if it remains truly Socialism, even after it has yielded to truth and justice on the points which we have mentioned, cannot be reconciled with the teachings of the Catholic Church because its concept of society itself is utterly foreign to Christian truth.” - Pope Pius XI - Quadragesimo Anno, May 15, 1931, n. 117

Liam,
The Socialism that Pio XI experienced in the 1920s/30s is very diffeerent from that proposed by Catholic Christian Democrats after WWII. Still flawed but very different, and having accepted the the criticism of Catholic social teaching.
For Americans esp. the word itself is problematic, rather than its actual rather shifting meaning. The socialism of Dorothy Day is not to be equated with for example Castro's/

Thank you, Father, for your reply. May I add the voice of a more recent Pope in respect of the condemnation of 'socialism'? He does not draw any distinctions.

“Continuing our reflections, ... we have to add that the fundamental error of socialism is anthropological in nature. Socialism considers the individual person simply as an element, a molecule within the social organism, so that the good of the individual is completely subordinated to the functioning of the socio-economic mechanism. Socialism likewise maintains that the good of the individual can be realized without reference to his free choice, to the unique and exclusive responsibility which he exercises in the face of good or evil. Man is thus reduced to a series of social relationships, and the concept of the person as the autonomous subject of moral decision disappears, the very subject whose decisions build the social order. From this mistaken conception of the person there arise both a distortion of law, which defines the sphere of the exercise of freedom, and an opposition to private property.” - Pope St. John Paul II - Encyclical Centesimus Annus − On the 100th anniversary of Pope Leo XIII's Rerum Novarum, May 1, 1991, n. 13

Yes, Liam,
But as Paul Priest, OTSOTA, intimates (and reproves me for explicitly saying) above, any 'system' that rejects or replaces Christ's Salvation leaves man still in his sin. Socialism or Capitalism or anything else will always fail man and cannot either fulfil him or bring Salvation.

I agree with Paul Priest in that regard, Father, but with the understanding that no 'system' political or economic is a source of grace per se, Notwithstanding, there may be economic 'systems' and political 'systems' which foster the opportunity for the Christian to grow in God's Grace by allowing freedom of religious expression, etc. and by permitting one to fully develope one's talents so that the benefit of such talent might then be shared equitably within a given community. To me unrestricted capitalism is nightmarish but can be tamed by men of good will. Socialism is godless at its roots and may no more be tamed that Freemasonry.