Destruction of the Order of the Franciscan Friars of the Immaculate 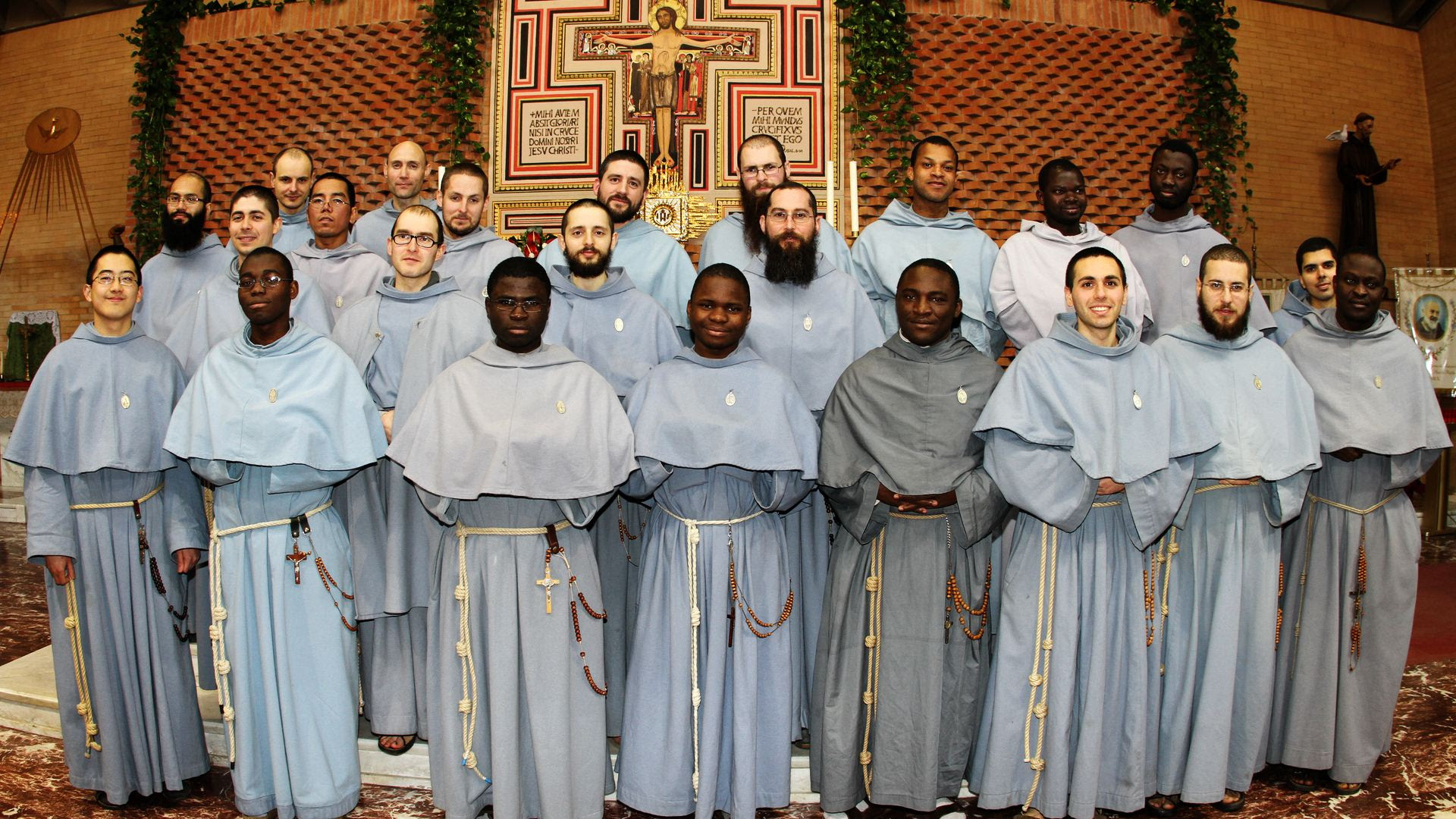 Nothing seems to sum up the new brutality of Church life than what has happened to the Franciscans of the Immaculate. To his discredit Fr Volpi, the now deceased Papal Commissioner, brought various spurious legal actions against them all of which were thrown out by the Italian courts. Now gossip, innuendo and intimidation are the weapons used against them.

The reason for all this according to Franciscans of the Immaculate is not merely their support of 'Tradition', though all of them seem happy to celebrate both forms of the Roman Rite but their opposition to the speculative doctrines of Karl Rahner, the Jesuit.

How far has the destruction of the Order of the Franciscan Friars of the Immaculate progressed? This is the updating of a chapter that is like a dark shadow on the pontificate of Pope Francis.
In 1969 two Fathers Minor, Stefano Maria Manelli and Gabriele Maria Pellettieri, asked the Father General of the Order, after a thorough study of Fontes Franciscani, to be allowed to start a "new experience of Franciscan life" back to its original rigor. In 1970 an abandoned monastery of the Order was made ​​available to them where they gathered more men over time, and with the establishment of a female branch, women also joined. In 1990, the Community was canonically recognized as a separate order.
read more here

I have just finished reading Father Serafino Lanzetta's book "Vatican II - A Pastoral Council". Many will know that Father Serafino is one of the Franciscan Friars of the Immaculate stationed at Gosport. I have no training in theology, my Latin is sub O level and my German non-existent and I therefore approached this weighty tome with trepidation but in fact found I could not put it down despite not being able to follow every word and note. Father Serafino has profoundly researched Vatican II and, as I understand it, his theme is that the Council's documents were watered down at the behest of Karl Rahner, the German Bishops and Cardinal Bea so as to try and attract the Protestants into unity with the Catholic Church. They wanted three things: firstly to pretend that the Catholic view of Revelation could really be seen as sola scriptura after all rather than Tradition, Scripture and the Magisterium. They then wanted membership of the Church not to be too closely defined so we could pretend that the Protestants were included and lastly they did not want any new dogma about Our Lady being Mediatrix or anything else - she was to be demoted. I suppose Rahner & Co thought that they could obtain a new vision of the Church which the Protestants would rush to join. To an extent they succeeded in watering down the documents but we now know that there has been no unity with the Protestants - indeed rather the contrary. Certainly from Anglicanism those who have come over seem not to have been attracted by this protestantised version of the Church but in fact by an orthodoxy which Rahner & Co wanted to reject viz: the Ordinariate.

This is a very important book which for me explained a lot. As for the FFI generally I see them as one of the brightest hopes in the Church and I am sure they will emerge triumphant from their dark night.

There is nothing new under the sun - smacks of similar things done to the English monastic orders during the Reformation, and, of course, the Knights Templar.

The latter has spawned all manner of spurious allegations and conspiracy theories that remain with us to this day, enabling various third-rate authors to make large sums, and doing damage to the reputation of the Church.

It might be worth reminding the Jesuits that their own order was supressed for a number of years, when they lost their way and could "no longer produce abundant fruits".

Also, this doesan't seem to tally with a Holy Year of Mercy...

One would hopefully expect decency, honesty, fair dealing and integrity from the Vatican. Yet another illusion shattered. I really despair.

Is there also mooted an attack upon the enclosed orders? How safe are ICKSP, FSSP, et al, not to mention the SSPX saga?

There is no doubt these Franciscan friars have been sinned against and Papa "who am I to judge" has committed a crime against truth and justice. You would think Fr Volpi's death would have been sufficient divine warning. We should not be shocked because the Pope no Pope from Peter forward is not indefectible in character or ordinary de decisions. We are supposed to humbly submit while our papa sins. I think this makes us complicit in his sin.

While hit very hard, they are not dead yet. Perhaps this attempt to discredit and destroy is also an attack against Our Lady. How long will her Divine Son allow this?

These Friars certainly have been given a very rough time but I do so agree with the comment above that they're not dead yet. I somehow think that they will pull through despite all these onslaughts.

My greatest disappointment is that Pope Francis does not seem to be acting on the greatest rot within the church~cleaning his house, Germany, and other places of duplicitous clergy who live a double life and try to justify their "personal lived experience". Exposed by the leaked papers of Pope Benedict XVI and known first hand by those of us in diocesan service~~we are waiting. Instead, Pope Francis appoints these men to oversee an important Synod on Marriage and the family, holds a Cardinal like Danneels in esteem and reactivates him after the havoc he caused in Belgium.
It seems to me that the kind of energy spent destroying healthy growing faithful communities would be better spent cleaning up the deep seeded double lived clergy who do more to divide the church than those whom joyfully celebrate liturgy as legitimate as is the Novus Ordo.
Perhaps I do not know all the details but I have experience and do know the underbelly of the church. Something is rotten in Denmark, Germany,Belgium and Rome. Do they really think we do not know?

The Jesuits came back from the dead; who knows what may happen once this sorry pontificate has passed into history.

"A voice in Rama was heard, lamentation and great mourning; Rachel bewailing her children, and would not be comforted, because they are not." Matthew 2:18

Even with his failed attempt to destroy the Christ-Child, Herod caused great blood-letting.

A true religious order will survive if God wills. All true religious will be attacked, even from within the Church. This is nothing new. Enough of the despair already.

Grief is not despair. The Blessed Virgin grieved upon the death of Her Son. She did not despair nor did Martha and Mary upon Lazarus' death. The decimation of the Friars of the Immaculate is an occasion for grief not despair. I urge you not to parse the matter as you have.

What God wills and what He permits may be altogether different. The substantive issues are worth serious reflection on all counts.

I guess the Jubilee of Mercy is over or never offered for the FFI. Shameful.

With the loss of the Papal States the Papacy became romantically spiritualized. The degree to which temporal power was lost corresponded in a need to promote spiritual claims and mystique which the secular state could not copy. Sorry it is catching up and attacking these. The idol we have created shows cracks and so we are dismayed. The Papacy stepped beyond legitimate bounds prior to Vatican II and I think has by changing so much and allowing men like Bugnini, recently men like Kaspar, Mahoney and Daneels to scheme manipulating papal claims and vanity we have all gained the impression the Pope can do what he wants with impunity like mini god. It might be time to turn our backs on Francis and it is because of his claim adultery is a venial sin to be lived in and his breaking the First Commandment at Assisi. When will our catholic tolerance of the antics of the Papacy reach a limit? When will we remind it of its duty and limits?

1569 Rising said...
One would hopefully expect decency, honesty, fair dealing and integrity from the Vatican. Yet another illusion shattered. I really despair.
17/9/16 3:04 pm


1569, you are right to say it is what we should expect – we should demand it even.
I will wager many of those reading this excellent blog will have been through your situation, maybe they are still there ?
It is the most distressing situation that you (me, whoever) can seem to set oneself against priests, bishops, cardinals, even the pope himself – on particular matters of faith and morals. But in standing up (with) for the One, True, Holy Roman Catholic Church, we do nothing wrong. We follow Jesus Christ, our Lord and Master and our Saviour. Nothing can detract from that. He gave us His guarantee of eternal support and help and we simply must leave it to Him.
No-one claimed it was easy living as a Catholic. Please don't despair.