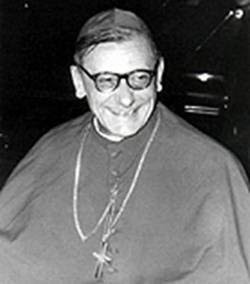 The Jesuit Cardinal, Jean Daniélou died of a heart attack in the house of a Parisian prostitute in 1974, the press and the "left" had a field day.

Daniélou had been regarded, until then, as one of the greatest modern theologians, the circumstances of his death led to him  and his theology being discredited. His insistence on a return to sources both of the Fathers and of the Vatican Council had already led to his being distanced from the Jesuits.

Sandro Magister gives an an extract of an interview with him on the "renewal" of religious life and suggests that his death was more innocent than those who sought to discredit him.

I think that there is now a very grave crisis of religious life, and that one should not speak of renewal, but rather of decadence. I think that this crisis is hitting the Atlantic area above all. Eastern Europe and the countries of Africa and Asia present in this regard a better state of spiritual health. This crisis is manifesting itself in all areas. The evangelical counsels are no longer considered as consecrations to God, but are seen in a sociological and psychological perspective. We are concerned about not presenting a bourgeois facade, but on the individual level poverty is not practiced. The group dynamic replaces religious obedience; with the pretext of reacting against formalism, all regularity of the life of prayer is abandoned and the first consequence of this state of confusion is the disappearance of vocations, because young people require a serious formation. And moreover there are the numerous and scandalous desertions of religious who renege on the pact that bound them to the Christian people.

The late Cardinal was ordained in 1938and became Cardinal in 1969.

Ordination before the bloodshed of
WW11 and decreed the 'Red hat' before the start of the madness of the 1970s.

I remember it very well and I remember the Cardinal very well. Outspoken, very gifted and an expert in patristics.

I never believed in that rubbish of the tales that followed the circumstances of his death. It was all to destroy his credibility as a Theologian and his works and writings.

If I remember correctly he died about the time of the Feastday of St Rita, so around the 20th or 21st of May.

May he rest in peace.

Lord, remember me when You come into Your Kingdom.

Priests wear black because they go to the place of Death, which is Sin.

All Priests, be he the Holy Father, a Cardinal, or Bishop, his main function is the salvation of souls.

The last place a Priest should want to die is comfortable in his own bed.

We should err on the side of Charity; a Padre died in a house of ill repute, he was there to save sinners.

Father Byles was on the Titanic, a ship built by enemies of God, and blasphemer workmen shipbuilders.

But Father Thomas Roussel Davids Byles, God bless him, went down with the ship and took with him many souls to Heaven.

He was wearing black.

I have read the account by Sandro Magister and he says that Cdl Danielou died of a heart attack in the house of a prostitute to which he had gone in secret to give her some money to help with Legal Fees which her husband needed.
He was simply performing an act of charity, not, as was inferred, seeking sexual favours!
The prostitute in question, swore that his was an act of charity and nothing else!
I do suggest that all read the full account by Sandro Magister.

I would rather you defended his reputation in your own posting Father. You present what appears on the surface to be a very compromising situation and then one must click away to discover the true facts. Would it not be better to start with the truth about him without any ambiguity?

I recall hearing the news at the time it happened, my immediate reaction was that the Cardinal must have been there for pastoral reasons, ministering or performing an act of charity. My impression was later confirmed by subsequent stories which exonerated him from anything improper.

I remember us looking to the Cardinal as a voice of religious renewal, then the "scandal" of his death broke it became impossible to mention his name, especially with Jesuits who were "helping" us re-examine our constitutions.
He was used as an example of how a more rigorous approach lead to hypocrisy and scandal, so the only way to go was relaxing our Rule, getting rid of community life and the habit.

Reporting of kindnesses or acts of charity do not sell papers or even create interest.

The garbage mongers only report EVIL and if that doesn't sell then they make it up.

A little sidelight on Jean Danielou that may be of interest. He made the Latin translation from Cocteau that Stravinsky set in his opera-oratorio 'Oedipus Rex' after Sophocles. This must be one of the few instances of a new Latin text being written for a musical work over the last century or so. Stravinsky wanted the Latin because it provided the "monumentalised" quality he was looking for.

A good Sheppard allows his flock to investigate dangers and become aware of the consequences of those dangers without the Sheppard merely removing all dangers to the point where the sheep do not think the world is without danger.

I think the Padre did well in presenting the story and allowing those of us that sit around gossiping like a bunch of little old ladies to do some research.

And it taught us to think with Charity first.

"Because thought has by now been perverted into the solving of assigned problems, even what is not assigned is processed like a problem."

David Sheppard the Sussex cricketer who became CofE Bishop of Liverpool would also have been a Shepherd to his flock.

Basic correct spelling and grammar would make some of these comments more readable.

We often have to use our understanding of what some comments are trying to say rather than looking exactly at what some of them are saying.
However there was one comment here that almost had no capital letters at all and the proper use of them can be shown as follows:-
"Mary helped her Uncle Jack off a horse. She did not help her uncle jack off a horse."

Years ago I read "God and us" by Danielou, a book that made a deep impression on me. A couple of years later I read "The Kingdom of Our Lord throughout History" by 19th century jesuit Henri Ramiere. What surprised me was that most of what Danielou said in his book had already been proposed by Ramiere. But it looks like the latter has been forgotten a great deal more than the former. I would appreciate comments on this by more knowledgeable readers. Thank you.

prTo nickbris: Be fair, Pablo is a Mexican, so we should allow him an occasional error. Is your Spanish 100% perfect? When I lived in Chile I was always grateful when Chileans made allowances for my mistakes.

'Father Byles was on the Titanic, a ship built by enemies of God, and blasphemer workmen shipbuilders.#

Pablo, Mexican or no, you really should refrain from eating the worm at the bottom of the tequila bottle. Did 'Bishop' Williamson come up with that claptrap about Harland and Wolff? Or is that your own fissiparous contribution to the shattering SSPX fold?

In fairness to Pablo, everyone or as we say on this side of the Irish Sea, even the dogs in the street know that Harland & Wolff was a deeply anti-Catholic institution. It was a Protestant workplace and didn't (and still doesn't) welcome Catholics. That said, hubris much more than bigotry sank the poor Titanic and irony of ironies, it was a Jesuit scholastic who ensured that we know what the ship looked like on the inside!

There's a story about the recent Greek elder, Fr Porphyrios. When he was blessing houses at Epiphany he went from one to the next regardless. Eventually he arrived at a brothel and blessed the house and the girls despite the Madam trying to make him leave saying the girls were sinners. He told her they were God's children and she might be the sinner. So, Fr Danielou died of a heart attack in such a place? Only the wicked would assume wickedness. Let his scholarship fend for itself.

Interesting to read Eamonn's comments on Harland and Wolf. One of my husband's uncles worked there many years ago and I understand he was one of the few Catholics accepted. One day he received word not to take the normal bus to the shipyard. I leave you to guess what happened ... but he survived by staying at home.