Flannery: another Failure of the Irish Bishops 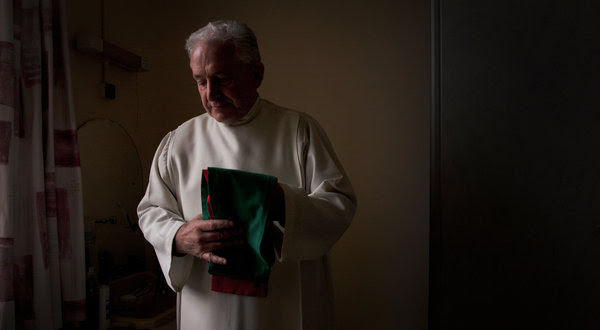 I have just been reading about the Irish Redemptorist Tony Flannery, who has been for sometime been denying the priesthood [and Episcopacy] was instituted by Christ. Fannery is one the founders of the Irish Association of Catholic Priests, which claims to represent a quarter of Irish clergy.
The New York Times reports:


...the Vatican objected in particular to an article published in 2010 in Reality, an Irish religious magazine. In the article, Father Flannery, a Redemptorist priest, wrote that he no longer believed that “the priesthood as we currently have it in the church originated with Jesus” or that he designated “a special group of his followers as priests.”
Instead, he wrote, “It is more likely that some time after Jesus, a select and privileged group within the community who had abrogated power and authority to themselves, interpreted the occasion of the Last Supper in a manner that suited their own agenda.”

Flannery has a history of this type of teaching, in fact it seems to be very much part of the founding theology of the ACP and does not seem entirely alien to some of the statements of certain Irish Bishops, who have only recently retired.
I really do believe "The Vatican"  should not be correcting heresies of priests like Flannery, who locally might be influential but on the international scene are really quite insignificant. The fact he and priests like him have had such an influence in Ireland is yet another sign of the failure of the Irish Epicopacy. A judgement by the CDF against a priest like Flannery is an indictment against the bishops who fail to "oversee". As the successors of the Apostles it is their role to "teach and refute error", before it developes into a gangrene that affects the whole body of the Church.
The simple fact that Flannery and his ilk are suddenly shocked by an intervention from the CDF demonstrates that the Irish bisops have fallen down on the responsibilities for years. Such obvious deviations from the Catholic faith should be dealt with at a local level, the failure to both identify and react to beliefs that are contrary to faith handed on by the Apostles is a very serious reflection on the health of a local Church.
Personally, I hope for the day when Bishops are appoint locally, which is one of ACP's demands, but that can never be unless the local Church holds the faith of the Catholic Church.
at January 22, 2013

The group he was instrumental in starting is a scandal in the Irish Church. This comment is part of a longer one on their website: it shows the mind-set. Notice his phrase, the "closed and fearful club". Yikes!

"...Fr Flannery’s open statement of his conscientious difficulties served to buttress also our confidence in the magisterium, because it too, by its restraint, was visibly witnessing to the dignity of private conscience, as well as to its confidence in its own positions. Tony’s witness, like that of other outspoken priests, told me that I was a member of a thinking and mature church, not a closed and fearful club that could never dare to reconsider anything.

The truth of those issues would in the end convey itself solely by virtue of its own truth, as Vatican II had confidently insisted.

Now, in a process that defies the promise of St John the Evangelist that perfect love will cast out fear, the CDF’s perfect fear has cast out love – as well as justice – from the central administration of the church. We are forced from now on to the conclusion that it may well be this same fear, rather than sincere faith, that rules the minds of those who do not differ from the central magisterium on any issue. This decision to excommunicate a priest for giving expression to private conscience on some non-creedal questions has delivered another deadly blow against the trust that needs to reign within the church if it is to fulfil its mission, and to educate. It has compromised every priest on the island who never questions anything. What answer can such a priest now give to the most tempting teenage gibe: “Aren’t you just saying that because you would lose your job if you didn’t?”

I too wait now to hear how Irish bishops will react to this CDF decision. Tony Flannery’s future is at stake, but so is something else. I can see no prospect of a successful ‘New Evangelisation’ in an Ireland dominated by the delusion that a seamless clerical unanimity, achieved only by threat of excommunication, will defend the truth. Instead that delusion can only strengthen a rampant secularist campaign to represent Catholic teaching as nothing more than repressive indoctrination. The Irish fans of Richard Dawkins can sit back at present, knowing they can trust the CDF to score their best goals for them."

Fr Flannery's teaching, which made it necessary for the CDF to attend to it, runs directly contrary to the teaching about the Priesthood in the Vatican II document Presbyterorum Ordinis (paragraph 2). Yet the ACP website has ranting comments about how the Vatican is reversing the Council. This is pure Orwell ... just as the Ministry for War 1984 is renamed the Ministry for Peace, so the "Vision of Vatican II" now, apparently, comsists of teaching that the Comciliar documents are rubbish.

Fr JH,
Surely that is the fundamental nature of heresy: to present the Truth as a lie or a lie as Truth. This is the unforegivable sin, the sin against the Holy Ghost, a transgression against Revelation, the sin that can only be dealt with by the knife of excommunication, lest it contaminate the whole body.

For some time it has been incredible to me that Irish bishops have failed repeatedly to condemn the errors of ‘outspoken’ priests - leaving it to the Vatican to rein them in after prolonged scandal-giving. I have seen heresy espoused by some priests in Ireland in assorted publications over a number of years - without any response from the bishops of their dioceses.

What is the matter with these bishops? They have a duty and responsibility to condemn and correct error in matters of faith for the protection of the faithful. Why are they not fulfilling that responsibility?

That some of these priests belong to Religious Orders does not relieve bishops of their responsibilities. Members of Religious Orders are subject to the Ordinaries of the dioceses in which they are located. Though they have limited faculties from their superiors within their communities, their faculties to preach and function publicly in the broader community come from their Ordinaries.

Some of these priests have garnered large followings among the faithful. Are the bishops unwilling to correct them because of their ‘popularity’…? If so, that is a sad reflection on what the ‘Good Shepherd’ is supposed to be.

That these priests bring their cases to the secular forum for justification and support should be a red flag for everyone. It has ever been thus with heretics. But the Truth and the Faith are not determined by numbers - as the great heresies of past Church history demonstrate.

What I found fascinating was that he can be head of an association of 'priests' when he doesn't believe in the priesthood?

The Irish Times ran an article including quotes that showed the main issue the CDF had was Fr. Flannery denying the divine institution of the priesthood.

These quotes were then redacted.

How wonderful to see Fr Hunwicke able to contribute. I am sure that we all send our best wishes and thank him for his guidance.

Why do these non-believers continue as priests?

For reasons I don't wish to go into, I have only just been able to have a wee browse through my usual Blogs at this late hour.

By coincidence, I have been re-reading "Vatican: A Novel" by the late Fr Malachi Martin SJ (until he jumped ship). My copy is rather battered and I have no way of knowing if it is still readily available (being computer barely semi-illiterate) but if you can get a read...

rgyothyl 235I was less than impressed by the statement of the Irish Redemptorists, as reported in the Catholic Herald:

”It is of immense regret that some structures or processes of dialogue have not yet been found in the Church, which have a greater capacity to engage with challenging voices from among God’s people, while respecting the key responsibility and central role of the Congregation for the Doctrine of the Faith.”

So to deviate from Church Doctrine is to be a “challenging voice”…? And we need to ‘dialogue’ about the truths of the Faith? That’s relativism, Fathers – which has no place in the Church or in the pulpit.

Humble questioning in order to increase one’s knowledge and deepen one’s faith is one thing. ‘Challenging’ with the implication that you’re right and the Church is wrong, is quite another.

What this says to me is that the Irish Redemptorists see Fr. Flannery as the victim here and the CDF – despite it’s responsibility as defender of the Faith – as the victimizer.

That’s not how I see it. I think the Irish Province of the Redemptorists has a deeper problem than Fr. Flannery…

GOR,
The Reds publications both here and Ireland push all types of non-Catholic guff, so this very dissapointing is only to be expected!

I am all in favour of freedom of speech but if you do not like the rules of the club then why stay?