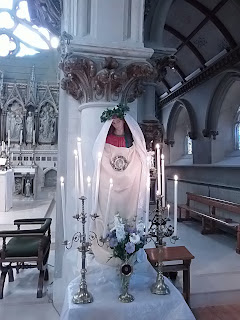 Our Holy Patroness, looking rather coy 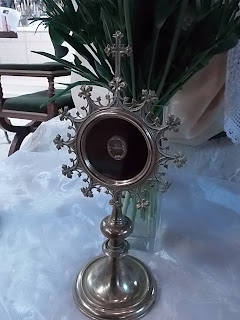 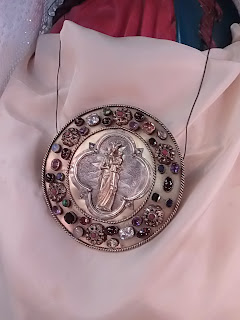 'Her jewel', its a cope morse but we haven't had a priest here with the right to wear it since the turn of the previous century, Provost Moore, in the 1900s. 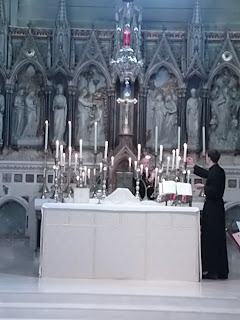 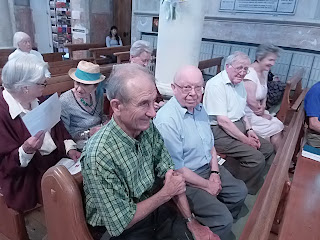 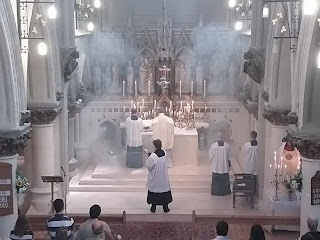 The Mass, A bit too much exuberance from the thurifer for the Roman Rite. 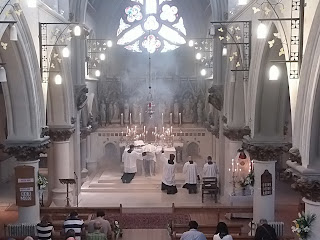 Of the many options in the modern Roman Rite we choose the option to celebrate both Forms facing the same direction that the congregation face, it just seems natural and amongst our many visitors rarely raises a comment. It seems to be only clergy who have a difficulty with it.
It is of course an entirely legitimate option for any priest to use according to the CDW. 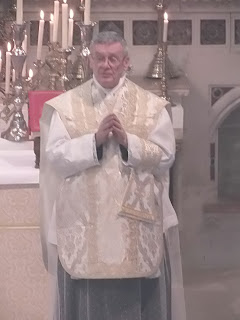 That alb was a bit of a mistake aesthetically, not much of it but it was a really hot day and what linen there is in it was cool, I always wear what the sacristans decide. The chasuble of white silk and silver and gold thread is from Signor Mancinelli, the maniple is a bit ridiculous and of course not strictly necessary in the Ordinary Form. 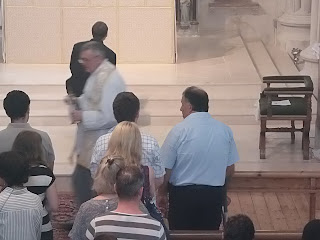 Veneration of the relic after Mass, or some of my charismatic parishioners call it 'a healing service'. 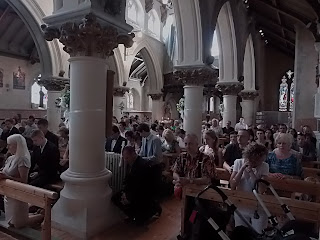 During the coming week we will celebrate a votive Mass of the Magdalen whenever possible.

A Very Happy Patronal Feast Day, Fr, to you and all your Parishioners.

Please explain what qualifies a Priest to wear the Relic, that you referred to, and why you cannot wear it on a Patronal Feast Day.

The Morse is only worn by Prelates or some Canons.

Wow, that Thurifer really got the smoke out, didn't he!?

Wishing you Father, and all your parishioners, a very happy and blessed feast-day.

I too would be interested to know more about the regulations around the wearing of the cope/reliquary.

It is not a relic that may be worn, IT IS A MORSE, it is a jewel, generally, unlike a pectoral cross or a bishops ring it does not contain relics, though today both rings and crosses, generally, are relic free zones.

A MORSE is an Episcopal ornament worn to close cope, when worn in procession, it is not worn by ordinary priests but only those Prelatural rank, bishops and certain senior Monsignori, and some particularly privileged chapters of Canons.

I notice that the altar is being prepared with the missal on the epistle side. Do you read the Collect at the altar? I know the GIRM allows the concluding rite to be done at the altar, which is what happens at the London Oratory.

Now that really was "bells and smells" with a vengeance. Happy memories of days gone by. Best wishes to all at St Mary's.

John,
No, the Collect is read at the Chair but the Introit is always read at the altar, at 'low' Mass aloud, at sung Mass quietly whilst sung by the choir, it is moved during the gradual or responsorial psalm.

p.s.
At both l&s Masses we use too Missals, one on the altar and one at the chair.

If only there were a few more priests like you around, Father...

Thank you for virtually sharing what you've got with the rest of us:D

May God bless your whole congregation!

Beautiful and thanks for sharing-have a great week. St. Mary Magdalen did me a favour yesterday. I have been surrounded by loud students where I am staying and not getting sleep even up to three in the morning. I asked her to deal with it. And last night was the first quiet night in over two weeks. She understands such behaviour, I am sure,