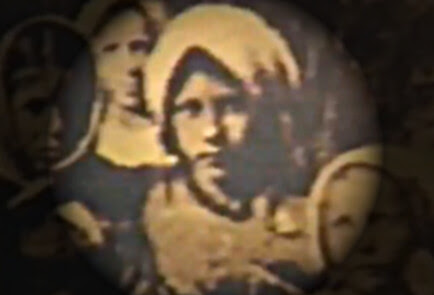 I find the feast of Maria Goretti deeply disturbing; born in 1890, killed in 1902, beatified in 1947, canonised in 1950, her story is really one of child abuse and the pre-Concilliar Church's response to it.
She was killed at the age of twelve, it seems as if there had been previous attacks on her which she had resisted. Sexual attacks on children are as ancient as humanity, the subtext of her Canonisation is that the preparation and investigation of her cause happened during the WWII, a time when so many children suffered a similar fate to St Maria.
The Church has never patronised children, this under nourished twelve year old is celebrated with the same rites as some ancient nun who suffered martyrdom. Its expectation is that faith in Christ demands heroic resistance to evil, even from children. Its expectation is that faith demands that parents should teach their children how to live and even die for Christ.
The photograph of Maria's mother at her canonisation and the presence of her repentant attacker Allessandro Serenelli speak poignantly about forgiveness and conversion, the flowers of innocence blood shed in Jesus Christ.

Her feast as a 'virgin martyr' reminds us that other children have followed the same fate, when I visit St Agnes in Rome the smallness and fragility of this Roman virgin martyr skull is a reminder that so many of those we honour under this heading were in fact little girls with heroic faith. 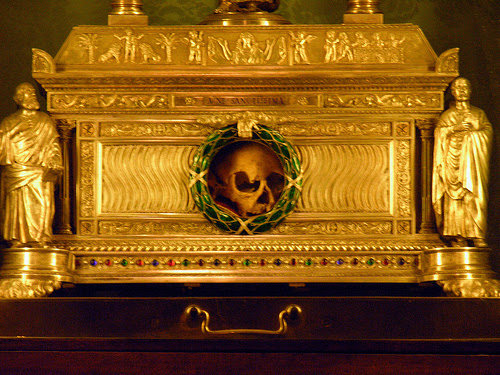 May their example and prayers encourage us to strive against the evils that attack the innocent, especially our children.
Posted by Fr Ray Blake

One of the patrons for WYD Rio2013 [http://www.zenit.org/en/articles/the-saints-and-blesseds-of-world-youth-day] is Blessed Laura Vicuña, born in Chile on 5 April 1891 and who died in Argentina on 22 January 1904 [http://en.wikipedia.org/wiki/Laura_Vicu%C3%B1a]. She had been physically abused by her stepfather who also tried to abuse her sexually. She offered her life for the conversion of her mother, who was living in sin with her stepfather. God listened to Blessed Laura.

Blessed Laura's feast day is the day after that of St Agnes (291 - 304). Each year in a home for girls in the Philippines where I am chaplain we combine these two feasts as many of the girls have been abused. We usually celebrate the feast of St Maria Goretti too but I'm in Scotland at the moment.

Six years ago two young girls were raped and murdered near Bacolod City where I live. One, Maria Teresa Medrano (13) was killed in Bago City, just south of Bacolod, on 16 June and the other, Mary Joy Mayo (16), was killed on 2 July in Talisay City, just north of Bacolod. Perhaps your readers will remember them and their families in their prayers.

Some years ago, after the canonisation, two 'Catholic' know-alls, one if not two being ex-clerics, made a crude and most objectionable comment, on BBC, regarding the saint. It also spoke volumes about the BBC, that it was allowed to be broadcast. No doubt they shall get their come-uppance!

An excellent post Father B and timeous too. Thank you.

Since I posted my earlier comment I've discovered that another patron os WYD Rio2013 is Blessed Albertina Berkenbrock, a German-Brazilian, murdered in 1931 by one of her father's employees who tried to rape her. There is a podcast about her on the WYD Rio2013 website: http://www.rio2013.com/en/multimedia/audios/149/Podcast-WYD-Rio2013-3-Patron-saints-and-Intercessors-Albertina-Berkenbrock

"The Church has never patronized children". Well, she didn't when I was a child, and I, who served the grown-up Mass aged 8 in 1959, would have had no truck with the patronizing "children's liturgies" so prevalent nowadays.

In his autobiographical "A Path From Rome" (Oxford University Press, 1986), Sir Anthony Kenny, who was a student priest at the Venerabile at the time, mentions the fact that his confessor, Mgr Heard, was involved in the beatification process for Maria Goretti.

William Theodore Cardinal Heard -- though a proud Scotsman a priest of the Diocese, later Archdiocese, of Southwark -- was one of the three prelate auditors of the Sacred Roman Rota attached ex officio to the Sacred Congregation for Rites which then had responsibility for dealing with causes for beatification and canonisation of the blessed. Many, including Cardinal Murphy-O'Connor in his homily at his Month's Mind Requiem Mass (he was then Rector of the Venerabile where Cardinal Heard lived) have referred to him as a Devil's Advocate. But this is incorrect, the Devil's Advocate and the Advocate for the Promoter of the Cause argued their cases before a panel which was either chaired by a judge of the Rota or included all three judges of the Rota. (I am trying to have this point clarified at the present time.)

Sir Anthony was a priest of the Archdiocese of Liverpool and accompanied Archbishop, later Cardinal, Heenan to the first session of the Second Vatican Council at His Eminence;s insistence even although he was already having serious doubts not so much simply about his vocation but more seriously about his very faith. The doubts won.

Thank you for a very poignant but concise post Father. The title of "virgin-martyr" is a heady one but we should never forget that little girls like St Maria Goretti were and are essentially incredibly brave, betrayed and brutalised children. God bless.