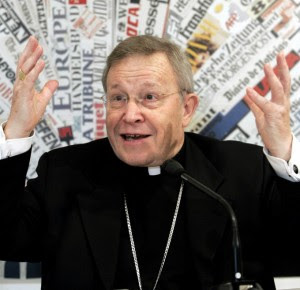 There are wicked journalists who for a few pence will lie there heads off and distort the truth, who like the unscrupulous Bill Gardner, who after his time in Brighton got a job working for the Daily Telegraph - though I did hear he might be sacked. Fortunately there are also brave courageous journalists like Edward Pentin who hearing a Cardinal make statements which are horrendous publishes them. If journalism is not to be left to the plain wicked, journalist like theologians, and bishops and priests have to be on the side of truth. Sometimes reporting the truth they have to embrace the Cross.

In the Kasper affair it is a Cardinal lies his head off and distorts the truth, then goes on to utter threats and menaces, There is that bit in the Gospels about rotten trees producing rotten fruit, grace after all works on nature, or doesn't. Catholics have a right to good and holy Bishops, who tell the truth.

Pentin heard something incredibly important from Kasper's own lips that revealed how the Synod was being manipulated. He did his duty, he reported it. Kaspar revealed himself as unscrupulous scoundrel and denied it accusing, Pentin of having made it up, in fact of having lied and invented the story. Pentin then released the recording. Kasper was forced to admit they were his words and apologized, not to Pentin but in one one of those meaningless apologies. not for the offense, but only IF people took offense at his words about African Bishops. His meaning that obviously it was their fault if they were offended.

Now he talks about a “deliberate dirty trick”, presumably on Pentin's part. He goes on, "The fact that Catholic media (and unfortunately a cardinal in person) should participate in it, in order to tear down another position morally, is shameful,” Kasper opined. When Kath.net asked as a follow-up question who that cardinal was, Kasper unfortunately gave no answer. The retired Curial Cardinal announced, however, that “other journalists” are going to take action against such “undignified machinations”.

It is the "other journalists" who are going to take action that sounds truly worrying. Are these the same two journalists who were happy to listen to Kasper's "the only good African is silent African" soliloquy but did not themselves think it worth publicising, or are they other house-trained journalists of his party, remember the German Bishops don't just publish pornography, the are major holders in other publishing ventures. Whoever these journalists are Kasper's tone is meant to be menacing.

There is a very dark side to the present Papal Court, which was so evident in the Synod, some are calling it the 'Robber Synod', one of my parishioners referred to it as the 'Dark Synod' because of the way in the Bishops and the outcome were manipulated. We were promised transparency and we got opaiquism, light but received darkness: bread but instead stones.

The previous Papacy treated journalists with great reserve, in this one there is a great reliance on them; all those odd interviews with elderly atheists, allowing private phone calls to trickle out, the giving of Synod documents to journalist before the Bishops. Many people even journalists themselves can be forgiven for assuming that this is a Papacy, like the Blair or Obama administrations, that is primarily aimed at the media and like Blair and Obama will come crashing down leaving many disillusioned, and as my old gran used to say, "you can tell a man by the company he keeps. 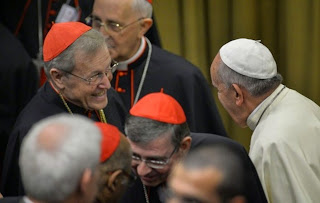 I began to think that I was imagining things before reading your blog Father but it seems that my imagination is not on overtime mode after all. What are we to do? If such men as Cardinal Kasper et al make sufficient noise how are we to know what the truth is? No doubt they & their ilk can sway many & leave those of us who want the truth stumbling. In your last blog I commented that Pope Francis was naive but perhaps I too am naive in not knowing where the truth lies.

Thank you, Father, for reminding us (I had forgotten) that the German bishops are also (or at least were recently) pornographers.

Love it that this blatant liar got caught red handed. So what else has he lied about? Can think of a bishop or two "close to home" who lied big time to a certain priest in the Southwark diocese who is owed an apology big time from his bishop and archbishop who lied to him. Said bishop and archbishop aren't fit to carry that particular guy's, to put it mildly "athletic supporter."

True to form then because that is how he was appointed a Cardinal in the first place. According to then Joseph Cardinal Ratzinger, JPII did not want to give the red hat to either Kasper or Lehmann. But the German bishops threatened to withdraw funding for the Polish Church if they were overlooked and JPII caved in. Their names were added to the list separately about 2 days before the consistory.

They were made Cardinals only because of blackmail. Kasper's recent behaviour is simply consistent with the way he has always operated. Pope Frank should beware the company he keeps.

An interesting piece of news from the Vatican Insider blog tells us that the English bishops at the Synod have agreed that this year we will be allowed to eat meat on Boxing Day even though it falls on a Friday.

Deacon Augustine, Where did you read that?

It was revealed to the leaders of the FIUV in a meeting with Cardinal Ratzinger shortly after the consistory of 21/02/2001. Michael Davies recounted the incident in one of his last interviews before his death.

Apparently the German bishops prevailed upon the Polish bishops to twist JPII's arm. There was a lot of controversy about these appointments at the time in the Catholic press. Kasper had come out strongly against Dominus Iesus, but both Kasper and Lehmann had been in hot water with JPII for providing counselling certificates for women so that they could obtain abortions. They had also signed petitions in the late 90's asking for divorced and remarried Catholics to be re-admitted to Holy Communion. As you can imagine, this did not put them at the top of JPII's Christmas card list.

I was distressed to read the following observation of Father Z. in his blog post of today:

"“Finally, I think that His Holiness is starting to feel – in an intense new way – what it really means to be the Vicar of Christ, the Successor of Peter. His role is, in a special, way to affirm the brethren and the uphold the regula fidei … No. Matter. What.”

I truly hope that was just a wind-up and not his take on all the dirty doings.

Why are the laity so surprised at bad bishops and bad cardinals when we have tolerated bad seminary instructors, bad college and university instructors, bad high school and grade schools instructors, not implementing the oath against modernism and not writing to bishops about blatant invalid Masses wherein priests make up words of Consecration?

What happened in Rome in the Synod is merely a reflection of what we real Catholics have endured for years in our parishes and dioceses. Look at the lack of leadership in the English Church for years.

To put the blame on one group of bishops or even the pope is naive.

Modernism has stalked the Church for almost 200 years...this generation of bishops, including our Pope most likely never opened Thomas Aquinas while in seminary or on their own.

The rot is not new, only now seen by some Catholics, who for some reason have not seen it in the past.

The Church has weathered worst storms and will weather this one, but leaving a strong remnant. Kasper is merely the joker in the pack. We know where to find the truth.

As to the laity acting shocked-we should look to our own families. How many British Catholics have ignored Humanae Vitae? How many Catholics have not taught their children orthodoxy, pushing that responsibility onto liberal schools?

The laity gets the leaders it has created in the Modernist culture of the Church at every level.

Do you want excellent bishops? Train your children in orthodoxy, parents. Single people, pray, do penance and stop blaming others for the state of the Church.

Why was there a standing ovation from the cardinals and bishops on Saturday? and why is it that people who decry (with total justification) Kasper's racist f!lth, refer to African and Asian cardinals / bishops who stood up to the farce as "others" while naming only Cardinal Napier and sometimes Cardinal Sarah? Are those "others" not worthy of recognition too or are we all just racist?
Thank you Father, the person who called you an e-bishop was right:)

Deacon Augustine,
I have been led to understand that this story originated not in a FIUV paper but in Christian Order, it is I understand an anecdote


And watch out for Fallen Human Nature!

Kaspar should be given a position where he can do no harm. Somewhere quiet and contemplative where he can have the possibility of a true conversion to the real Catholic faith. Perhaps I am naive, but I hope and pray that God will change Kaspar's heart and mind.

Yes, Fr. Ray, Michael Davies certainly did repeat the account in an interview in 2004 which was published in Christian Order. The interview with John Bishop is still available at this link here:

More details were recounted in an earlier interview he did, however, I haven't been able to locate a source for that one - yet.

However, irrespective of the circumstances surrounding his elevation, nothing is more revealing about Cardinal Kasper than his own words:

"[A] divine intervention in the sense of a directly visible action of God is theological nonsense. (Jesus the Christ, 1974)"

We have had a long heretical litany ever since. His bigotry towards the Africans and the lying denials of his own words merely sum up a long ecclesiastical career of treachery to all that is good and holy.

@DA I've tried to read this interview in the past but always struggle.

I don't get Michael Davies and the Bugnini conspiracy theory. I suspect that the problems of the Church were no different from any other institution from the period. Namely, from 1945 onwards, Western Europe started paying the USA protection money, via dollar hegemony, from the threat of the Soviets. The Catholic Church also started paying "tribute" to the "New Rome" and that is essentially where we are today. It also explains all these wars in the Middle East as the American century project clashes with Islam. Davies is naif if he thinks that this might have been halted.

Yes, I'm sure the current administration at the Holy See have several ways and means of dealing with honest, Catholic journalists just as they have for such priests, bishops, religious, e.g. FFI, and their "undignified machinations". But always at arm's length, you understand.