Josophat: the Saint of Christian Unity 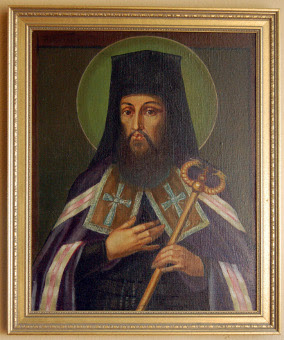 When saying Mass in St Peters for some reason I often got shown to the altar of St Josophat, today is his feast and there is an extract from Pius XI Ecclesiam Dei in the Office of Readings. Pius XI speaks of him as the Saint of Christian Unity, who gave his life for the unity of the Church. 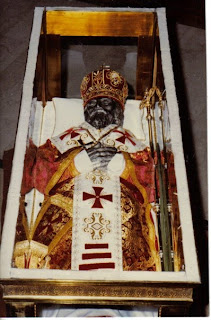 13. He was convinced that he would be martyred, and often spoke of the possibility of such an event occurring. In one of his famous sermons he expressed a desire to be martyred; he prayed ardently to God for martyrdom as if it would be for him a singularly blessed gift. A few days before his death when he was warned of plots that were being laid against him, he said: "Lord, grant me the grace to shed my blood for the unity of the church and in behalf of obedience to the Holy See." On Sunday, November 13, 1623, his desire was realized. Surrounded by enemies who had gone in search of the Apostle of Unity, he went forth smiling and gladly to meet his fate. He asked them, following the example of his Lord and Master, not to harm the members of his household, and then gave himself into their hands. He was set upon and killed in a most barbarous fashion. Despite his wounds he did not cease till his dying breath to implore God's pardon for his murderers.
14. Great indeed were the fruits of this glorious martyrdom, especially among the Ruthenian bishops who knew how to draw from his death a living example of firmness and courage, as they themselves testified two months later in a letter sent to the Sacred Congregation of the Propaganda: "We too are ready, as one of our number has already done, to offer our life's blood for the Catholic religion." As a result of and almost immediately after this martyrdom, a great number of people, among whom were the very murderers of the Saint, returned to the bosom of the unity of the Church of Christ.
15. The blood of St. Josaphat even today, as it was three hundred years ago, is a very special pledge of peace, the seal of unity. We call it a very special pledge for the present times because those unhappy Slavic provinces, torn by disturbances of all kinds and by insurrections, have been empurpled with the blood spilt in the terrible and inhuman wars of our own days. In truth, it seems to us that We hear the voice of that blood "which speaketh better than that of Abel" (Hebrews xii, 24), that We behold Our martyr turning to his Slav brothers and calling out to them in the words of Jesus: "The sheep are without a shepherd. I have compassion on the multitude." Verily, sad is their condition, terrible their distress! Alas, the great number of exiles from their native land, what an awful carnage, what great loss of souls! Looking now as We do at the calamities which have fallen upon the Slavs, certainly greater than those which Our Saint wept over in his time, it is extremely difficult for Us to keep back the tears which well up from Our fatherly heart.

I must say I have a sneaking admiration for Pius XI, not an easy man but in many ways an outstanding one, a bit more of a warrior than his successors. Though Pius XII might well have been its author, he was the guiding force behind Mit brennender Sorge. Most people will know Ad Mortalium Annos, again concerned with Christian Unity:

10. So, Venerable Brethren, it is clear why this Apostolic See has never allowed its subjects to take part in the assemblies of non-Catholics: for the union of Christians can only be promoted by promoting the return to the one true Church of Christ of those who are separated from it, for in the past they have unhappily left it. To the one true Church of Christ, we say, which is visible to all, and which is to remain, according to the will of its Author, exactly the same as He instituted it. During the lapse of centuries, the mystical Spouse of Christ has never been contaminated, nor can she ever in the future be contaminated, as Cyprian bears witness: "The Bride of Christ cannot be made false to her Spouse: she is incorrupt and modest. She knows but one dwelling, she guards the sanctity of the nuptial chamber chastely and modestly."[20] The same holy Martyr with good reason marveled exceedingly that anyone could believe that "this unity in the Church which arises from a divine foundation, and which is knit together by heavenly sacraments, could be rent and torn asunder by the force of contrary wills."[21] For since the mystical body of Christ, in the same manner as His physical body, is one,[22] compacted and fitly joined together,[23] it were foolish and out of place to say that the mystical body is made up of members which are disunited and scattered abroad: whosoever therefore is not united with the body is no member of it, neither is he in communion with Christ its head.[24]

Passages such as that make it difficult for me to accept the hermeneutic of continuity. If the change in teaching about ecumenism is not a doctrinal backflip then what would be?

No so different times, really Father Blake. These are both messages of confidence in the foundation of the Catholic Church.

There always have been and always will be, tares amongst wheat. The Body of Christ is composed of flawed and sinful people. And whilst the plants are young, who can discern the difference?

The "Orthodox" do not like St Josaphat of Polotsk at all. To read their account of him, and the Catholic one, is like reading of two different people. (Since they do not profess the Catholic Faith whole & entire, they cannot possibly be called Orthodox. Why is Hans Kung reckoned unorthodox, when they are equally so ? Blithering nonsense is nonsense even when the Papacy connives at or sponsors it.)

As to ecumenism: what Jonathan said. The Popes talk about "the hermeneutic of continuity", but have so far done nothing to show it is any less chimerical than a flying pig. That one can give an an extended of flying pigs, their locomotive abilities, & other details pertaining to them, does not repair their lack of real existence. The H of C has, on the evidence given, no more reality than Hogwarts School of Witchcraft and Wizardry. And that is without investigating the nature & extent of the alleged continuity. So the concept of the H of C bristles with problems.

If ecumenism as now practiced is A-OK - why dod the Church threaten Catholics with nothing less than excommunication for doing things now approved by the Church ? This is a serious moral, doctrinal & theological issue; not something trivial. The implications could hardly be more far-reaching.

Does the CC still believe in the principle of contradiction - or does it now believe the notion that truth is to be found in a "higher synthesis" of contradictory assertions ? If the latter, then Catholics have every right to be told, because such a shift in ideas has very serious implications for the Church's intellectual & spiritual coherence. If rugger were changed in mid-game to tennis, people would have every right to complain noisily; and are the Faith & its constancy in the same sense & coherence not far more important than such games ?

I know little about Saint Josophat but as a saint who promoted true Christian Unity, that is return to, and holding to, the One True Church he is the sort we need nowadays.

Now why is your admiration for Pius X1 “sneaking”? Personally, I have a great admiration for him. He had a true sense of priorities. In addition to Saint Pius X, he warned specifically about the dangers of Modernism a warning some of his successors ignored, hence the shambolic mess the Church is in today - and it’s getting worse.

Above all, he stated Catholic belief in Mortalium Animos an encyclical which should be the basis of all religious education in Catholic schools, if there are any left, that is. But additionally, he was an outstanding mountaineer in his youth having pioneered some splendid ridge routes on Monte Rosa and others.

Now that’s the sort of Pope we need in the coming years!

Pray for our present pope. He may still become a saint, in the crucible.