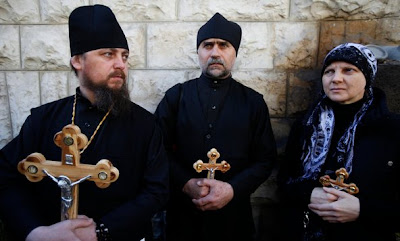 I found this video on Facebook, I presume it is happening in Moldava. It shows Moldavan Orthodox Christians taking down a menorah and erecting a cross. Note the 'jEWISH' in the title of the video.


I have many Orthodox friends, I am am an Orthodoxphile, my retirement fund consists of Russian icons. I have gained a great deal from my Orthodox friends, they question hyper-Latinism, I pray regularly for the end of the Great Schism and re-union, I believe in 'two-lung' Christianity.

But...!
I am aware that many Orthodox, not those I meet, hate us Latins. There is an unpleasant nationalism in Orthodoxy. There is anti-Semiticism in Orthodoxy, in some Orthodox church's one might find material no Catholic would dream of touching, let alone reading. There is an Erastianism within Orthodoxy that even the most whiggish Anglicanism would baulk at.

Much is talked about nowadays regarding Orthodox second or third marriages, more liberal friends often ask me how it works. I tell them, in most Greek parishes you just turn up with you civilly issued divorce certificate and arrange your next wedding, only if the priest is a bit of a stickler will there be any difference between the first and second or subsequent marriages. Crowns and processions, nuptial blessing, though technically disallowed, are practically always used, the idea of a penitential wedding has all but disappeared along with any sense of spiritual direction for the divorced and remarried.

I welcome Mr Putin's use of the idea of 'Holy Mother Russia' as a narrative to replace corrupt 'Soviet Russia' but it is important to remember Orthodoxy has often been used to support a Nationalism that Catholicism, because of it pan-national nature is incapable of supporting.
at December 19, 2014

I think 'Nationalism' is the barrier in the churches in England,although I think that this will not be acknowledged.

It is common now in political matters to try to justify some new idea by claiming the Australians, or the Paraguayans, or the Indonesians do it.

We have the same phenomena now within the Catholic Faith. The push to diminish the concept of the Sacrament of Matrimony by allowing Adulterers to receive the Body, Blood, Soul and Divinity of Christ while still in a state of unrepentant Mortal Sin is but one example. If this is conceded then rest assured that active homosexual practise will follow.

Yes, the Orthodox allow the first of these. But then they are a separated Church, partially heretically so, and this is one of their heresies. It has no place in Catholic thinking.

We must hold to Catholic teaching while welcoming such overt sinners into our parishes - as is specified in the Catechism of the Catholic Church, sections 1649 – 1651.

Your comment, Father, to this video is fair in most respects. Like all comments, it can only give a limited overview, from a limited perspective.
Basically, human beings make mistakes, which are sometimes very bad and have dreadful consequences. Orthodoxy itself is often (ab)used as a tribal or ethnic identifier, which demeans it as a Christian label.
Repentance requires courage, no less than fidelity does. The Roman Synod last month showed what happens when people, even in high positions, are encouraged to speak or act without restraint. The advocates of mercy, of a pastoral practice separated from the Truth and the Life(Jn 14:6) Who is our only Way to salvation, seek open approbation in the Catholic Church of practices which are already characteristic in many "Catholic" institutions and dioceses both in the the Old World of Europe and in the New World of the Americas, in which Roman Catholicism is withering on the vine.

Modernism is a cultural disease which has destroyed Christendom, and destroys Christian life wherever and in whomsoever it takes a hold. It has penetrated and operates strongly in many "Orthodox" churches, especially in Western Europe and the Americas, as well as the Greek-speaking world.
Its great characteristic is to make Christian Tradition subservient to, and only an instrument of, the desires and decisions of the generation that receives the Tradition handed down from the Apostles. That has to be identified unflinchingly and relentlessly, as an abuse, but in Orthodox Catholicism, only someone in authority under that Tradition, can identify it as an abuse with any effect. Let the reader understand....

B flat,
My point really is that we have a tendency to assume that the grass is greener elsewhere. Grace, but also sin is everywhere.

It is also true that many orthodox churches were deeply complicit with Communist regimes, especially the Russians. This was due to various factors: nationalistic and Erastian tendencies which conflates faith with national loyalty and identification of the church as a department of national government. It was also due to a desperate desire to survive at all costs - even at the cost of spiritual integrity. It was also due to infiltration by agents of the communist party and direct take over of church appointments by the soviet rulers. There has still not been an adequate acknowledgement and purification from all this among those churches. As a human institution, Rome is far from perfect, and God alone knows what sort of rough ride we are going to have over the next few years. But, as John Henry Newman remarked when he became a Catholic, "it just happens to be the one true Church".

The one thing which could ever convert me to Orthodoxy would be the sheer manliness (however inappropriately expressed) that seems to be prevalent throughout Orthodoxy.

Orthodox groups offered to protect the Orthodox Churches in Russia following the Pussy Riot sacrilege No 'everyone is saved including Fido' for them they'd take the FEMEN 'girls' that are popping up with depressing regularity and manhandle them out of the Church with cudgels and whips and to be frank I'd be tempted to join them.

Also I went to a Divine Liturgy once and the Royal Family and the Military were prayed for at the Litany of Fervent Supplication, no social Justice nonsense for them.

Like you Father I long for the day when Moscow, Constantinople and Alexandria bend the knee to Rome.

In the words of the Divine Liturgy, let us pray to the Lord......

Apart from the divorced and remarried stuff. I am single, and really don't give it a thought. The Orthodox Churches know how to maintain their traditions much better, if not way better, than most, but not all, "mainstream" Roman Catholics do. Most Roman Catholics look to Protestantism as their standard for Christian theology and worship. At least here in the USA. Which I find comical, and at the same time, a mockery, to those Catholics, Saints, and Martyrs, who died before the Second Vatican Council. If I were not Catholic I would most definitely be Orthodox. Keep in mind that it was the Emperor, not the Pope, who organized the first Ecumenical councils. The Pope did not even attend a single one to my knowledge. So to say Russia is "nationalistic". Britain is as well. Putin may be symbolic of the emperor, a sort of Constantine. History only repeats itself. Which may be a good thing. The Queen is the "Head of the Church of England". Thanks to Henry VIII. And she doesn't even have a theology degree, or is a monastic. Putin is NOT the head of the Russian Orthodox Church. Big difference!.

Having watched the video, I couldn't help wonder what the Moldavians would make of this aspect of the Sanctuary of the London Oratory.
http://www.londonbyclick.com/imgallery/london_oratory/DSCN9527.jpg

How about some love for the Eastern Catholic Churches?

@Robert, you seem think that anyone who lives in Britain is an Anglican who regards the Queen as head of the church and that we applaud this country's nationalistic outlook. I am a Roman Catholic not a member of the Church of England. I agree with your criticisms of the "national religion" here. I think the Orthodox are far closer to us than the Protestants, but there are structural faults too. BTW it is my understanding that no Council was valid until ratified by the Pope. Christ did not appoint the Roman Emperor to be the rock on which he built his Church, but Peter the fisherman.

@"Mad", Social Justice is not nonsense, it is basic Christianity and integral to Catholic Teaching as all the fathers, saints and the popes of the last hundred and fifty years have attested. As for the thought of assaulting people with "cudgels and whips" because they have fallen prey to one form of sinfulness is plain anti-Christian.

BTW I too long for reunion with the orthodox churches.

You know full well that what passes itself off us 'social justice' in the Church today is either tripe or plain anti-catholic.

As for beating women who desecrate the altar and scandalize the little ones with their exhibitionism, what sort of man stands by when his Lord is directly attacked? Catholicism is not a religion for sissies, the Lord himself (one two occasions) drove those for profiteered from Religion out of the Temple using... what was it again? Oh yes a Whip.

There was a very good exposition of the very dubious, if not downright heretical, beliefs and practices which the Eastern Orthodox churches follow, to be found on the blog "Christian Order", two or three years ago. I do not know if it can be found there now. Not only their laxity over divorce and re-marriage but their understanding of Original Sin is certainly far from our theology on the subject. They have had their own theologians and quite simply have no regard at all of the solidity to be found in the works of St. Thomas Aquinas. they are much further removed from Catholicism than many would like to suggest. As for them being a "second" lung to our first lung then the breathing of such a body would need quite a bit of life support!
I would say that Orthodoxy is far better than no religion at all and it beats protestantism into a cocked hat, but there is only one true Church and it has its seat in Rome.

In Palma de Mallorca the centrepiece of the great window has as part of its structure a great Star of David.

If you really believe in "Two Lung" Christianity (JPII didn't really explain what he meant by this?) then there's little point in becoming concerned on issues such as the divorced and re-married receiving Holy Communion. After all, it one half of the Church already practices it, and more, why the fuss?