Punch a Heretic Day or the Feast of St Nicholas 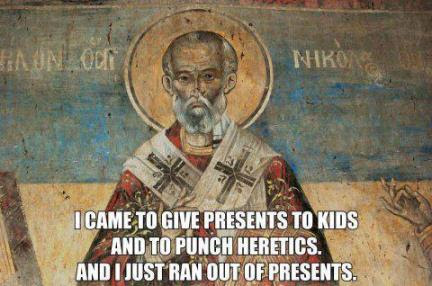 I know you will say to me we can't do this today, we have to find the odd Arian and embrace him. We can't call people Pelagians, 'Porridge eating scumbags' or pultibus Scottorum praegravatus, which is too racist for modern sensibilities to be translated into the vernacular.

St Nicholas is another of those Advent saints who insist on being faithful to the Trinity and Incarnation.

I love the old European custom of St Nicholas going around bishops houses disguised as a small child and demanding to know if they have been good in the past year and if they have giving them presents and they haven't giving them a good thrashing. In the case of bishops 'good' means loyal and faithful and true.

The St Nicholas legends of course unite theology and morality, the Eternal Word becomes flesh so we might hear the Logos speaking directly to us, revealing the Will of the Father to us. That arch villain, the heresiarch Arius wanted to deny to deprive small children of Christmas, to steal their tangerines and toffees. The great and glorious orthodox Bishop Nicholas by defending the doctrine of (ὁμοούσιος) consubstantiation saved children from being butchered and virgins being sold into prostitution. We see this extra-ordinary change happening with the laws enacted by Constantine after Nicea, children and young women, even slaves are given a new dignity in the Imperial Code.

How right the Prefect of the Vatican Congregation of Doctrine of the Faith, Cardinal Gerhard Ludwig Müller, is to say 'the separation of theory and practice of the faith would be the manifestation of a subtle Christological heresy in principle'. Wrong believing leads to wrong living, just the same as wrong living leads to wrong believing. A bishop or priest in mortal sin will always tailor what he preaches to fit his sin.

A Christian cannot live rightly if he doesn't believe rightly, 'show me someone in mortal sin and I will show you an heretic' or as I think Ullathorne or one of his contempories said, 'show me a sinner and I'll show you someone who hasn't learnt his catechism'. 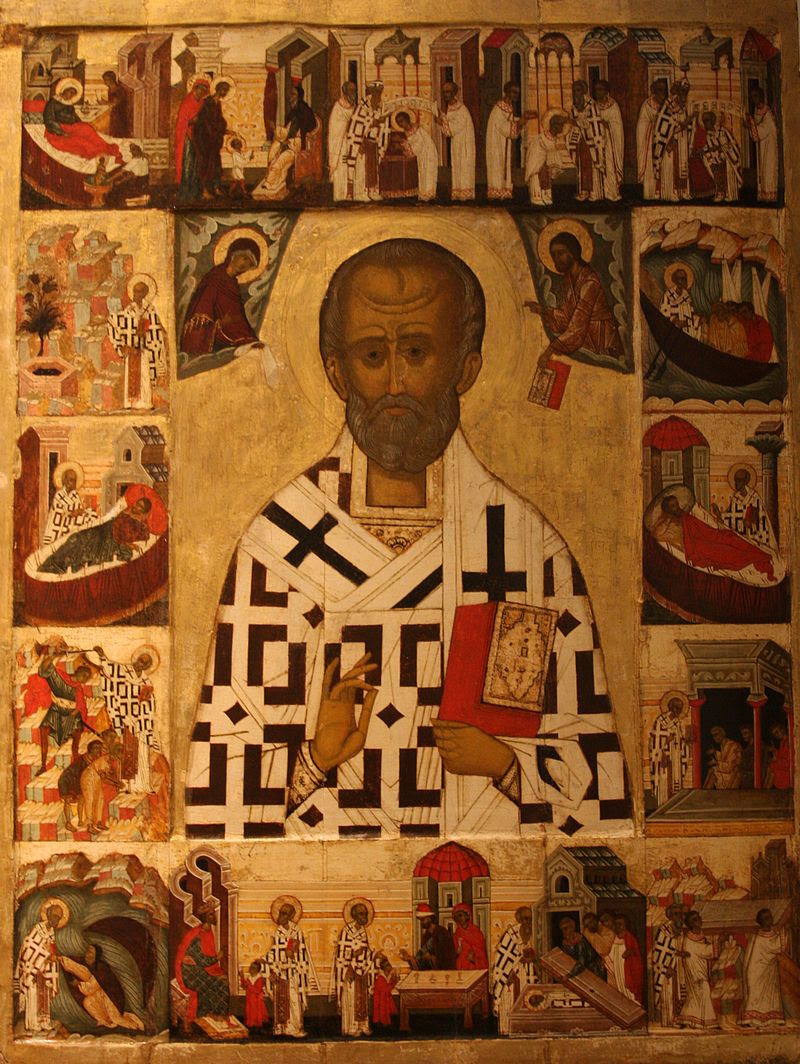 "A bishop or priest in mortal sin will always tailor what he preaches to fit his sin."

This guy keeps turning up - anyone might wonder if there was a topical case in point down there on the south coast!

As the adage "All heresy begins below the belt." seems to be proven again and again these days, it does make me wonder about those who advocate for the divorced and remarried being admitted to Holy Communion. What is it that they are trying to cover their backs for? What skeleton makes their closet such a scary place that it must be justified at all costs? Do they have concubines of whatever "gender"? Do they really think that if the Church says a sin is not a sin, the magic magisterial pixie dust will transform what was formerly vice into virtue? Or is it the cliched "If I'm going down, we're all going down together" syndrome.

As for those who preach "universal salvation", I guess they must be really messed up.

That should read "in mortal sin who goes to Communion and I will show you a heretic"?

While your general point is credible, I don't think it's invariably true: the late unlamented Marcial Maciel, and the order he founded, preached solid orthodox doctrine.

I suppose it can work both ways: the priest or bishop with a guilty conscience will rationalise his sin and bend his preaching to reflect this - but equally, he may project an image of fervent orthodoxy in order to avert suspicion. Since the latter adds hypocrisy to heresy, it's in some ways even worse.

I love this concept---'punch a heretic day'. I'll be helping the little people in my life celebrate the good bishop with treats, but inside, I'll be thinking about the heretics I'd like to see punched. ;-)

Eish Father, you have given me ideas, but it’s Christmas soon and there’s no time left.

Heretics are the product of poor teaching or false teaching,it's the hypocrites who must be punched

Heresy and hypocrisy are flip sides of the coin.

- Hypocrites don't like what the Church teaches, so they act differently when they can.

- Heretics don't like what the Church teaches, so they pretend or convince themselves it teaches something else.

Also, you have to be very careful labeling someone as a hypocrite. Is a person who believes what Jesus teaches on anger a hypocrite because struggles with his temper? St. Paul specifically says that he does the things he knows are wrong and doesn't want to do. Does that mean he is being dishonest because he vehemently teaches others not to do those same things?

Jesus never teaches that honest and open adherence to sin is somehow superior to struggling to overcome sin. That form of "honesty/authenticity" is a modern ruse to justify sin as natural, and to exalt the sinner over the Church.

There ought to have been several beatings of heretics at the last meeting of the Synod of Bishops. Who was it that said in these days the bad are very zealous and the good reticent, even fearful?

Let he who is without sin cast the first punch

While your general point is credible, I don't think it's invariably true: the late unlamented Marcial Maciel, and the order he founded, preached solid orthodox doctrine.

I think you will that when one looks closer at the Legionnaires, they are not as "orthodox" as some people like to think - rather they are neo conservative: holding tight to whatever "orthodoxy" happens to be in vogue. Fr. Jonathan Morris of Fox News, is a great example of this.

"..."show me a sinner and I'll show you someone who hasn't learnt his catechism'."

## The point being made is clear - but is it true ? The Tree of Knowledge is not the Tree of Life - salvation does not come from having tons of "info", or from having a string of degrees, but from God's Grace. St Paul says it best: "If I should know all mysteries, but have not love, I am nothing". It is troubling to see knowledge of doctrine, or knowledge about Catholicism generally, treated as though the possession of it must, almost of necessity, make a man a Catholic or a Christian.

The scribes & lawyers "knew their stuff" too, but Our Lord had no congratulations for *them* - but for the "bad Catholics" & other refuse of society, He had a great deal of time; He spent His time with sinners & outcasts, and was crucified as one. Orthodoxy by itself is as good a road to Hell as any heresy: "without love, I am nothing". The excessive emphasis on the power of "knowing stuff" seems very seldom to be balanced by any emphasis on more important things, like the gratuity & power of God's grace - the emphasis on "knowing stuff" risks leading the Church into a souped-up Gnosticism or Pelagianism, if the emphasis is on our knowing, and not on what God does for us in Christ.

One is not depreciating the worth or importance of the intellectual gifts in the Christian life; but they are not, & cannot be, supreme or all-important. That place belongs to Christ, Alone. There is a hierarchy in such things; our knowing about God and our orthodoxy are not supreme.

James,
I suspect 'learnt' means more than 'knowing' in this context.