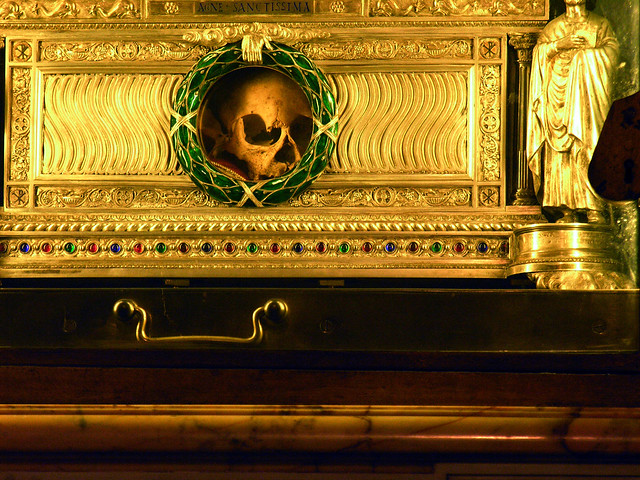 I used to think of St Agnes as a fiesty teanager or a self confident young woumen in her twenties but the relic in her Church in the Piaza Navona belies this. It is her skull, so small it can be held in one's cupped hands. She was obviously a child, not even her second decade, maybe not even five or six. She died for the faith, like the Holy Innocents, like those many children, slaughtered or left to starve by ISIS or the aptly named, Boko Haram (boko meaning education haram meaning forbidden or sinful), who with child like faith said, "We will not give up Jesus". There is something frightening in that the Church holds St Agnes as a Virgin Martyr. We are forced to recognise that sexual violence in her martyrdom, it is not something new. Sexual violence, against the vulnerable has always been a weapon of war. The Romans had a superstition about executing children, hence those terrible stories about little S Agnes being exposed in a brothel.

War, and conflict in general are never really about glorious armies facing one another but crueler things, starvation, poverty, disease, dispossession, psychological and sexual oppression. In fact disproportionately it is always the weak who suffer most. The weakest and most vulnerable are always children, children going hungry, children homeless, children orphaned and unwanted, unprotected, even children consider vermin.

Its not just in war zones that children are victims, every broken family, every poor family, in every workless family children suffer.
As the Pope said yesterday, “I have heard that families with many children are among the reasons if poverty. It seems to me that this is a simplistic opinion. The main reason for poverty is an economical system that has removed the person from the center and has replaced it by the god of money.”

Where sex is used irresponsibly, yes, where "couples breed like rabbits", where it is separated from procreation and the life that is suppose to result from it, children suffer. The Church talks about 'welcoming children as a gift of God', teaching which for Western culture today is extraordinarily subversive. 'Responsible' or loving sex always considers the result of the sexual act, for us it is never a quick fumble in the dark.

Three Kinds of men in this world

Protectors, Predators, Peter Pans, about whom I have written tons on my blog.

We need to train our children to be saints. NOW.

Dear Father,
In this posting you surpass your occasional failure to correct typing or spelling errors.

In the middle of your penultimate paragraph you have the following:
Heterosexual sex is about difference and otherness, whilst homosexual (from the Greek homo meaning same, often in the past being seen as narcissistic) always has a certain orientation towards new life, towards a third party, the child who might be conceived.

This is nonsense. I suspect a whole clause is missing, or your cut-and-paste has misplaced a grammatically incomplete digression into homosexuality into the middle of a true observation about heterosexual coupling, making homosexuality pretend to look piously for the creation of children.

This need not be published. i do admire your work. But the posting needs urgent correction.

Dear B flat,
The sentence with, the addition of a semi-colon and the word 'sex' makes perfect sense to me but on re-reading is a bit of a pale red-herring, and is unnecessary. Consequently I have removed it - thanks for proof rereading - always welcome.

Matthew 18:6
But he that shall scandalize one of these little ones that believe in me, it were better for him that a millstone should be hanged about his neck, and that he should be drowned in the depth of the sea.

I unfortunately doubt that the Holy Father was referring to fornication when he made his comment about Catholics need not breed like rabbits.

I don't doubt that St. Agnes was quite young, but you might be underestimating her age. People in general were much smaller then. The agricultural revolution which enabled civilization led to much higher human populations but smaller humans compared to prehistoric times. Skeletal evidence shows this. Ancient legends of giants may be just embellished accounts of encounters between civilized people and hunter/gatherer barbarians. Only in contemporary times has a better diet enabled humans on average to match or exceed prehistoric size.