Synod Not of Liberalism 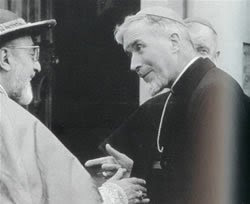 I've had a few emails, many expressing fear as to what the Synod will comer up with this afternoon. I know who is drafting the final document, which doesn't fill me with much hope, I am a bit concerned that people like Cardinal Garcia is saying that a lot of the decisions will be left up to the Pope, and what says will be determined by which corner he has been painted into, and how much flexibility he actually has, in fact to put it crudely, what he can get away with.

I am still perplexed by Francis, he is typical of his generation, and especially of that most idiosyncratic of religious orders. the Jesuits, he seems a divided soul, mistrusting that which gave him birth. I think that he will be anxious about unity, and anxious to be ambiguous or inclusive. For someone who has a limited pastoral experience, who seems hide-bound by his experience of the Church in Argentina and briefly in Germany, who is seriously handicapped linguistically to Spanish and Italian I can understand him being cautious, even frightened to come out with clarity, besides that is not his way. I can understand his concern up until now has been to keep the Teutons and the more liberal exponents of South American theology in the Church. I think he might have been surprised at how Catholic many of the bishops actually are, and what they want.

I have been struck by how inarticulate liberals are, but then the thing is that there is no liberal consensus. Liberalism is essentially a critique of orthodoxy and as such it has no  substance whilst the orthodox arguments are well rooted and honed, are tested and are not an untried experiment. The nagging S Martha sermons, so often criticising orthodoxy and the orthodox, are certainly in that critical sense liberal. So often liberals are surprisingly not liberal, that often manifests itself in tyranny and the promotion personal and eccentric notions. However that is not always so, one example: in England and Wales the move to re-introduce Friday abstinence was pushed by the most liberal of our bishops. From what I know of him, he was my bishop, it wasn't to promote orthodoxy or for a spiritual reason, but rather it made 'sociological' sense, but what matters is not what he intended but what God does through fasting and penance.  Basing theology on sociology rather than Revelation, is certainly a characteristic of liberalism. The strange think is Catholicism makes sense, Liberalism ultimately doesn't, it is empty fruitless and destructive, it has nothing to say to the world, the young actually find it off putting, patronising and destructive.

For those who are feeling despondent -WAIT the Church has a long history and probably a longer future! Councils, Synods, Popes might say a lot but not much is heard, and even less is accepted, and even less implemented. Wait because what was clear Africa is the ascendant. At the Counter-reformation it was Spain and Italy, before VII it was Germany and France, after it South America, now it is Africa. Dare I suggest it, it was that Archbishop, that Apostolic Delegate for French speaking Africa, who was so keen on promoting native clergy, so keen on promoting sound seminaries and sound catechesis, that he managed to set fire to Africa, and the flame still burns brightly. I suspect this was not yet the triumph of orthodoxy but it was a defeat for Liberalism - but wait, be patient.
at October 24, 2015

I've enjoyed your comments, Father. Thanks for your insight and for blogging!

John I don't wish to advertise anyone's sins here, especially as what you say is speculation. As for your Bp Doyle, yes, demand an explanation, you are entitled to it.

Thank you, Father Blake, for another sound and informative blog post. You have a grasp of the frustrating liberal mindset that is so clear. It is comforting because you understand what we in the rank and file are having to endure from the vacuous ramblings of liberal prelates. Let us pray for holy Mother Church.

Father with the greatest respect, perhaps we all need more faith and less of a tendency to despair.
“Teaching them to observe all things whatsoever I have commanded you: and, lo, I am with you always, even unto the end of the world. Amen.”
We either believe these words or we don't.

I wonder if I am unusual in wishing to see the liberals take themselves off and allowing the conservatives to work for formal reunion with the Eastern Orthodox churches? One might hope that SSPX would come back on board at some stage in this process.

PS - oi, leave our Bishop Doyle alone. I know he can be a tad on the liberal side but he is a good shepherd! :-)

Denis says "Father with the greatest respect, perhaps we all need more faith and less of a tendency to despair."....

With all due respect, Denis,I don't think it is a lack of faith, nor is it a tendency to despair here. In fact, I submit that because we have faith, we are seeing the reality of the situation, and the reality is that the Church is in crisis. And because of this crisis, there is a grave danger to souls.

We know the Magisterium of the Church - and understand our duty to obey the Magisterium. As such, we are appalled to see the very person who should be safeguarding, or protecting the Magisterium, (The Holy Father, in case you are wondering who), has been taking steps, and may well take further steps to undermine it. This is not something to be taken lightly - it is extremely serious.

We may be desolate about that, that is only natural, but to call it a tendency to despair - in the sense of NO HOPE - is vastly overstating it. We trust Our Lord when He says that the gates of Hell will not prevail against the Church, but we also understand this will be a very rough time, if not a horrific time for the Church. It is definitely not something to take lightly. I think an analogy of this would be a World War. Even if we knew the outcome of a World War - victory for our side- I would opine that we would feel quite desolate about it.

Final reporting on the Synod: http://www.churchmilitant.com/news/article/breaking-final-synod-showdown-report

You are not alone.

I'm intrigued by the slim vote in favour of a 'case by case' approach as to wether divorced and remarried couples can play a 'full role' in the life of the church - what does that mean ? Will it survive ?

None of the changes which may occur in the Church will affect me because I am an invalid and can practise my Catholic Faith as I know it should be practised. I despair though for the poorly instructed, almost everyone in the last thirty years, who will think that the ersatz Catholicism which may emerge, when the dust settles, is the real deal.

I used to wonder why the bishops stood by and let the Catholic school system teach heterodoxy. Until this synod I honestly didn't realise that so many bishops weren't Catholic and didn't really mind that the Faith taught in Catholic schools, for the most part, was dreck.

Further to Gungarius' observations, add abusing one's spouse to the list. It is a shame the Synod does not appear to have discussed domestic violence. Should an abused wife stay or go? Personally, I think she should go. And I am sure that the abusive husband should not receive Holy Communion until he has made a good Confession. Orak

Here's a very interesting article on the Synod by Fr. Raymond deSouza

Well from my brief reading of the Italian I see waffle and fudge over the issue of the divorced and remarried but absolutely no change in the teaching about homosexuality or cohabitation. I may be wrong!

Palincor IG said: "I'm intrigued by the slim vote in favour of a 'case by case' approach as to wether divorced and remarried couples can play a 'full role' in the life of the church - what does that mean ? Will it survive ? "

It seems probable that there really was a cabal intent on getting rid of Pope Benedict and appointing Pope Francis with an agenda. The St Gallen group led by Cardinal Daneels seconded by Cardinal Cormac. In office Pope Francis has recognised that debt by appointing Daneels to the Synod and pursuing the agenda. He did his best to pack the Synod and just succeeded by one vote in that particular case; however he seems to have lost elsewhere so he criticises those with closed hearts. Nice.

Sounds like same-sex fornication is still off the menu

Allowing a 'case by case basis' will end up with one rule for one and another rule for someone else even with the best of intent toward divorced and remarried couples being fully readmitted. But - let's see where this goes first

Pope criticizes bishops for NOT wanting to change Jesus' teaching' Apparently they are "hiding behind Church teaching"!

Tried to listen to Cardinal Nicholls this morning but that Humphrey idiot kept interrupting every word. Lord Sachs was about the most lucid but I've already forgotten what he said. It would seem though that nothing has changed