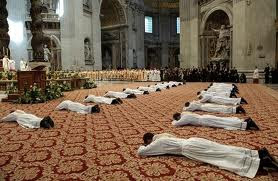 Surprising as it might sound not a few of my friends have had difficulty getting ordained, one resorted to growing a beard and strumming a guitar just to prove he wasn't too Catholic. Another, well, that is too recent to tell but again it seems to have been a matter of Catholicism; he was, the pastoral situation he was placed in wasn't. In my own case, seminary was painful, one instance, I was told I should hide, preferrably throw away some books by a rather shady theologian I used to read and quote. The theologian was elected Pope, the priest who gave me the advice left the priesthood to marry a headmistress, such is life.

I believe no one has a vocation to the priesthood until he stands before the Bishop on his ordination day. Ordination is not a right it is always a gift, given through the Church.

People get annoyed with me for not replying to emails, I get quite a few from people I don't know, asking for prayers, advice, pretty basic information or just wanting me to report stuff on my blog, I can't really keep on top of it. I mean to get back to them and then don't.

Today I have received a number of emails from people about a fellow blogger, who I admire a great deal, though I have never met him, who announced his ordination as a Catholic priest has been deferred.

He has been the blogging face of the Ordinariate and has shown to many, the occassional schoolmasterish waspishness, but more importantly the wit, the erudition, the love for the Catholic faith, and obedience to the Magisterium, and without being Ultramontane, admiration for the person and the office of the Pope, which is present in the Ordinariate.

The man in question has not spoken of why ordination has been deferred, except to say, "I think there has been some misunderstanding about the content of my blog". I have never found anything questionable on his there, though it has often caused me to question my presuppositions, especially about Anglicanism, and Catholicism, it has helped many understand how Anglicanism and Catholicism can co-exist. I have learnt a great deal from his blog. He is a wise old cove, he would make a very good confessor, I think.

As far as my emailers are concerned, I know nothing, and yes, I agree it is terrible shame. I hope it is not a blow to the credibility of the Ordinariate. To those of you still on other Tiberian shore do not allow this to scandalise or deter you.


Despite everything, I remain convinced that the Ordinariate is the only means of achieving the great vision of the Catholic Revival, longed for by so many great and holy men and women, learnedly described in our own time by Fr Aidan Nichols: an Anglicanism reordered after heresy and schism, an Anglicanism United But Not Absorbed.

Got half way across the Tiber and turned back because of all the bickering.

May Blessed John Henry Newman (himself no stranger to misunderstanding) and Our Lady of Walsingham pray for him.

Perhaps it's the absence of children and women to soften the heart, but my experience of formation is that a culture of bullying and intimidation can easily prevail in a seminary.

2) Your thinking Father is impeccable, Fr.William Doyle In "Shall I be a Priest" Notes that the commission appointed by (now) St Pius X confirmed the opinon of Canon Joseph Lahitton that the TRADITIONAL teaching of the Church on Sacerdoral vocations was as following.

a) That a vocation to the priesthood does not necessarily include any interior inclination of the person or prompting of the Holy Spirit.

(b) That all that is required from aspirants to Ordination is “a right intention, and such fitness of nature and grace, as evidenced in integrity of life and sufficiency of learning, as will give a well-founded hope of his rightly discharging the obligations of the priesthood".

(c) That, given these conditions, a true vocation is unquestionably conferred by the Bishop at the moment of Ordination.

Finally I am looking foward to tommorow I will attend the Ordination of several men for the Ordinariate in the Clifton Diocese.

...and if you (plural)care at all for the reverend gentleman, you (plural) will rigorously abstain from commenting on the scabrous, loutish blog of a certain journo, when (rather than if) he sinks his ferrety fangs into the business.

He already has made one.

Rather than deferring him, John Hunwicke should be consecrated a bishop - he would raise the general IQ of the Episcopacy by several points. He is a wise and generous man greatly loved by many of us in America.

Kelso, I believe he is married, which rules out the episcopacy.

Dear Fr Ray,
I have met & conversed with J.H. I share your assessment of him, & his mindset - he will be an asset to Holy Church.

Dear old E&W. It sometimes feels like 'the Terror' of revolutionary France, does it not?

We NEED blogs like his & yours in these times!

This is one of those incidents that beggars belief. I suppose if one was seeking higher office in the Chinese Communist Party one would be well advised to shut down one's blog. The Church in E&W looks increasingly Stalinist.

But no doubt there is more to this about which we will never be told.

As one still left, for the time being, on the other bank of the Tiber, it's the final paragraph of your post which strikes me, Father. What effect is this mess going to have on those not in the first wave?

There is some conjecture that (as I had rather suspected) the problem may be the lack of enthusiasm for Apostolicae Curae exhibited by the once and (I hope) future Father H on his blog. If so, he is not alone. It would not be difficult to stumble across monsignorial statements of non-repudiation of earlier Anglican ministry.

JH is scholarly, well-known in Forward in Faith circles and the academy (being the recent celebrant of the Latin Holy Communion service at the University of Oxford), and an all-round good egg. Quite how whoever made the decision to defer him expected it to remain secret is incomprehensible. This looks like a PR disaster in the making.

When such things happen people are quick to assume that 'there must be more to it', 'something we aren't being told', etc.
However, personal experience of such things has shown me that there is usually LESS to them, rather than more!

Apostolicae Curae, that is a possibility, but no-one is asked to reject their Anglican orders, merely to accept Catholic ordination, which a defect in Anglican orders. In 2011, we, and the Anglo-Caths are in a different place, a little messier than AC understood.
Many Anglicans are ordained with Catholic rites, with a Catholic intention, and even with those who we might consider validly ordained.
Graham Leonard was ordained "conditionally", Fr H might consider himself in the same condition.

I would have thought that this has nothing to do with Apostolicae Curae but it has all to do with his blog. The blog format has become a no-go area for this bishop's conference and the gangs of monsignori and lay apparatchiks who surround them. With all due respect to Fr. Blake, they don’t fear him or any of the other priest bloggers whom they ultimately control and whose intellects they do not respect. Fr. Hunwicke, rather like Fr. Furlong, is a more intimidating prospect. Remember, these bishops are part of a generation who set about to destroy the Catholic Church in these islands and have largely succeeded in their objective. The last thing they want is serious opposition to the project. Do not expect Fr. H to be ordained soon.

I cannot see what closing one's blog has to do with Apostolicae Curae. Or is he being told to make some Auto da Fe of absolute orthodoxy and unquestioning submission to Rome? Would that not be somewhat unusual in E&W seminaries?

"Remember, these bishops are part of a generation who set about to destroy the Catholic Church in these islands and have largely succeeded in their objective."

You don't get far if you displease the ladies with lewd jokes on your blog. Trust me.
Especially if you are married as he is.

"Surprising as it might sound not a few of my friends have had difficulty getting ordained, one resorted to growing a beard and strumming a guitar just to prove he wasn't too Catholic. Another, well, that is too recent to tell but again it seems to have been a matter of Catholicism; he was, the pastoral situation he was placed in wasn't. In my own case, seminary was painful, one instance, I was told I should hide, preferrably throw away some books by a rather shady theologian I used to read and quote. The theologian was elected Pope, the priest who gave me the advice left the priesthood to marry a headmistress, such is life."

Remember, these bishops are part of a generation who set about to destroy the Catholic Church in these islands and have largely succeeded in their objective.

I think you're being too hard on Archbishop Vincent Nichols and his brother bishops. Some strategies pursued in recent decades may have backfired, and lapsation rates among young baptised Catholics may be sky-high, but I simply don't believe that any of our pastors explicitly willed the destruction of the Catholic Church in England and Wales.

What Fr Hunwicke said was: "I am closing down this blog with immediate effect, and I shall promptly delete any comments on it (or emails sent to me) which are in any way whatsoever critical of the Catholic Church, or any of its officers, or of the Ordinariate; or which recommend me to adhere to any other ecclesial body."

This rather suggests to me that the problem was not with what he wrote but rather what was said in the comments by others. I think there is a problem here - Damian Thompson's blog for one - where haters of our religion take over to such a degree that the comments are not worth reading.

However I think there is a danger here rather akin to the problem that States and the Church had when printing was invented and a much wider dissemination of texts became possible. The attempts to licence some publications and suppress others were not very fruitful - think of the Index. The internet does need to be regulated and made subject to law but quite how is difficult to say.

The Protestant myth that prior to the Reformation nobody was allowed to read the Bible was, in my understanding, false. The objection of the Church was to the publication of unauthorised versions such as Tyndals.

It is somewhat ironic that when the Reformers published their Bible they called it the Authorised Version!