Embarassment in the Conclave 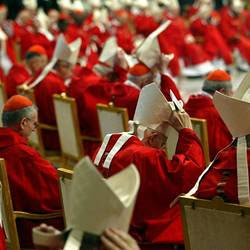 Elsewhere there has been lots of speculation over the contents of the Vatileaks investigation by the three retired Cardinals. The suggestion have been that it is somehow connected to a "lavender mafia" and power struggles between senior Cardinals and Prelates. Apparently all will revealed to the Cardinals gathered for the Conclave and produce more than a little embarrassment for some.


The Vatileaks dossier contains information about the power struggles and conflicts that went on among the Church hierarchies, but it does not – the Holy See wished to stress – condemn any scandals or sex-abuse related blackmail. Cardinal electors will therefore go into the Conclave knowing the real version of the Vatileaks story, after months of assumptions, resentment and suspicions.

I am not entirely sure if it happens before the Conclave the Cardinal are bound to secrecy, as we seen many old men are rather garrulous.
at February 22, 2013

Pope Benedict: “The greatest persecution of the Church comes not from her enemies without, but arises from sin within the Church.”

there's a new report out on the realisation that there is something called a 'homolobby' which is shaping up essentially to be the Church of Anti-church.

"a blockbuster report has just emerged produced by a PhD priest at the Pontifical University in Krakow Poland where he says he was asked to prepare this report by various bishops and even cardinals. It details how the secretive homosexual lobby of priests and bishops in the Church is trying to gain a stronger foothold in his native Poland and how much damage has already been done by them in other parts of the Church throughout the world."

Thank you for posting about this, Father. Some have chosen to ignore it, which in itself is quite disturbing.