The introduction of St Joseph into the Eucharist Prayers to bring them in line with the 1962 revision of the ancient Roman Canon was an idea introduced by Pope Benedict, and has now been promulgated by Pope Francis.

There are lots of good reasons for the introduction of the name of the "spouse" of the Blessed Virgin, for me, first and foremost, is that in a time when fatherhood and espousal or marriage is going out of fashion, we need as much devotion to St Joseph as we can scrape up. The other reason is that devotion to the Saints and the inclusion of their names in the Canon of the Mass, the Confiteor, the Offertory Prayers, the Libera Nos is ancient and very much a part of Roman Catholicism, so this is a tiny bit of restoration.

Although there are lots of very good reasons for the inclusion of St Joseph, there are also some good reasons not to have done this, this is where the  incredulously voiced, "Change?" comes in.

One reason is that St Joseph was never a name that was used in the Roman list of Saints, devotion to him is a somewhat recent development. In the Middle Ages devotion to St Joseph in England was more likely to have been to St Joseph of Arimathea rather than the foster-father of Jesus.

The major problem which I see is one that was feared before the Reformation and in Orthodoxy, that  Josephine devotion took away from devotion to the Mother of God, the Blessed Mary Ever-Virgin. In my diocese there is modern church, where statues from its predecessor have been placed. On one wall in the "devotional area" the statues of Mary and Joseph are placed together, the impression is that they are equal. The seems to be a denial that Mary is "the highest honour of our race", she alone is Immaculately Conceived, she alone is Assumed into Heaven because she shared parenthood of the Saviour with God the Father, not St Joseph.

In ancient iconography the Blessed Virgin was always paired with John the Baptist, not St Joseph, therefore my partially incredulously voiced "Change?" is based on a slight concern that the change marks a lessening of devotion to the Mother of God and therefore of a weakening of the doctrine of the Incarnation and God's saving intervention in human history through Jesus.

This image sums up some of my concerns. Apart from its ugliness and poor execution, this mosaic from Westminster Cathedral seems theologically highly problematic to me, I think it is heretical!

Is St Joseph really "larger" than Mary, does he really have a greater hand on Jesus than His Mother, was he even her equal? Isn't his re;lationship to Jesus, like our mediated through her, the Mother given to us at the Cross? Does he really share the same gaze as Jesus in looking out to the world? Did Jesus in any way resemble him rather than his Mother? 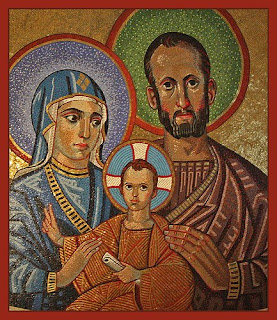 Of course, one devotional tradition holds that Joseph, as a favor to Our Lady, was assumed into Heaven.
Also, Blessed John Paul's Redemptoris Custos examines the example of St. Joseph while always maintaining the presence of Our Lady before him on the pilgrimage of faith.

Perhaps the mosaic image of the Holy Family reflects the "inverse order" of honour : St Joseph was the head of the family, and is the least of the Three; Our Lady is next; Jesus was subject to both of them, yet being the Incarnate Word.

And honestly, would you like to see Joseph with a hand smaller than Mary's?

St. Joseph is shown in his role as the protector of his family. The hand of the Child Jesus rests on His Mother, indicating her importance. There does not seem to be anything heretical in this depiction.

I wonder where it is in the Cathedral, and how long it has been there.

I don't think it's very good art, but at least Mary is standing slightly in front of Joseph.

It is through St Joseph that Jesus inherits his dynastic rights in the House of David. Through him, Our Lady was Crown Princess of Israel even before she was Queen Mother.

Don't trip. a) All middle Easterners look alike anyway [ducks and covers] b) giving him small hands would make him look like a wuss.

The child Jesus looks fed up, and in a bad and obstinate mood, St Joseph looks confused and out of his depth, and Our Lady looks as though she intends to give Jesus a good smacking as soon as the photo session is over and she gets him home.

It takes three Oratorians to change a light bulb. One to change the bulb, and two to hold the cope.

Good piece Father. On the Oratorians in Manchester , they are drawing people from all around the area , and 'renewing' the faith of many - myself included. So shame on you Fr for telling jokes about them (they were funny though , and perhaps I will check if Fr's Ray and Chris have heard them this Sunday after Solemn Mass !).

What worries me is the growing gap from Orthodox practice and belief, since if there is to be any ecumenical progress, it is with the Orthodox to whom we are closest. Then there was that change to the Rosary under John Paul II, and his mass production of canonised saints. This pace of change feels wrong.

To my understanding the inclusion of the name of Joseph is a good idea because Joseph is a Model for Fatherhood in General in these confused times and he was a Holy Spouse to Mary. Most Important however is the Fact that St Joseph is the Protector of the Universal Church and the Patron of the Dying as well. If non Catholics have a problem with it that's their problem. GO TO JOSEPH!

I don't see the humour in the extensive list of people to change a light bulb.

We have rubrics for a reason Father - you might view them as "unimportant" but the dear Fathers of the Oratory are made of sterner stuff.

Unlike you they have not fallen under the spell of our new Holy Father.

I see that the light bulb which you depict is the American version with a screw fitting not a bayonet fitting.
As for the inclusion of St. Joseph, I think that he has been ignored far too long.

JARay, Here at Great Maudlin the rite is that the deacon presents the veiled "lux bulbus" to the priest for blessing, then together with the subdeacon they descend to the place of non-illumination with necessary ministers, so I never actually see the bulb in its unveiled or unboxed state.

I am afraid we still use the blessing for the Vestibulum Pallium SCR 1904 adapted for electricity in 1923.

P.S.
I think Fr Duncan is referring to a "low" changing of the bulbus, where there is no choir or other Sacred Ministers and the priest himself recites the antiphom "Lux Fiat ...".
However, even at a "low changing" there is a necessity for "at least two acolytes bearing candles", obviously a concession to elf & safety.

ps
Vestibulum Pallium, is obviously wrong, it is what I got for "gas mantle" in Google translate, anyone help with the Latin there?

Obviously there is scope here for the question:-
How many priests does it take to change a light bulb?
I'm not too sure of the answer but somewhere there will have to be someone to run back to the shop to purchase the correct bulb for the light fitting itself, since Father has obviously chosen the wrong fitting!
As for a gas fitting it would have to be Pallium vapor.

The German and Czech immigrants brought the love of St. Joseph to the Midwest, where most, if not all the Catholic Churches have a side altar to him, opposite the one for Mary-stage right, as it were to stage left. I am not a fan of this icon, which I have seen before, but I am fussy,

Nonetheless, I think his inclusion in the Mass is awesome. Thanks for the interesting post.

Mantellum candens would do; the electrical equivalent could be bulbus lucis, although a German would translate it as pirum candens.

I’m happy with the inclusion of St. Joseph, as he is one of my patrons. In Ireland years ago boys were given the names of their father and both grandfathers at Baptism. My maternal grandfather was named Joseph.

I confess I was not aware that St. Joseph had not been included in EP II, III, IV as I usually follow the Roman Canon in my Missal - regardless of which one Father is using at Sunday Mass. He is a ‘spirit of Vat II priest’ and the EP he uses may not even be an approved one…

So, in the interests of preserving my sanity, I follow EP I…in Latin!

I seem to have missed the "e" from the end of "vapor".
If you enter "pallium vapore" into Google translate you will get "gas mantle".
Sorry to have missed it out. I did try!

Does St Joseph want all this attention? Perhaps he disapproves of it all, sees it as a gimmick, and was happy with the way things have been for so long.