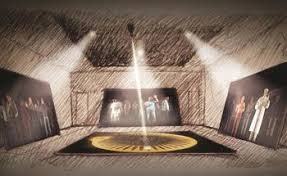 I have been looking for pictures on the net of the Holy Sees Pavilion at the Venice Biennale, all I can find are  a few sketches. It is first year the Holy See has been present at the festival.
In a papacy that is visually bland and  less artistically rooted than the previous one I am a little worried about the future of the Church's involvement in the arts. Possibly they are not as important as they were in the medieval and post-reformation period. "Art" especially the visual arts have become more conceptual and less Incarnational and "art" that is often more about the artist than the subject sits uneasily with the Church's understanding of liturgy, which has been its normal context. Whilst Banksy might well speak to the man in the street, most contemporary art has become specialist and speaks only to an elite.

Anyhow, Fr Eamon has a report on the Biennale, apparently the Holy See spent 750,000 euros on the temporary pavilion and its contents, as we are urged to reach out to the poor by Pope Francis. Apparently Cardinal Gianfranco Ravasi the president of the Pontifical Council for Culture, said that it was time for the church to re-establish its role as a major patron of contemporary art. "Art and faith are sisters," he said. "They both have the same aim of discovering the foundations of reality – not just reflecting the superficial.". He said that the "Church", I am never quite sure what that means, intends to commission new Churches by outstanding architects and to fill them with liturgical objects by contemporary artists.

On one level that is fine, I would love to see Pope Francis wearing a beautiful contemporary chasuble, instead of mass produced cheap vestments we have seen so far at his liturgies, and perhaps holding a modern chalice which speaks of the sacrednes of the mystery of the Eucharist. However, I am not quite sure how it will sit with his understanding of his Papacy, where everything seems to depend on his personal charm and charisma. What I hope we do not get is a celebration of the ugly or frankly ridiculous as we did with Abp Piero Marini's absurd and wasteful contemporary commissions, which spoke of nothing but a fracture with the Church's own artist and liturgical heritage and the vanity and silliness of the artist and commissioning patron.

The problem with contemprary artists, unlike their predecessors, is their lack of formation in the faith and the liturgy of the Church, invariably rather than serving they desire at best to "challenge" if not subvert. 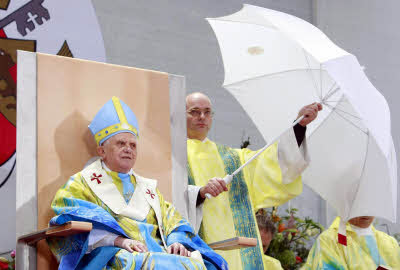 It all strikes me as a lot of misguided nonsense. The idea of the Church having been a "patron of the arts"- as if Michelangelo and Co. were graciously invited in to come and do their own thing- is completely bonkers! Skilled contractors were engaged to carry out works which were carefully prescribed and for specific and agreed purposes- an altarpiece, a narrative fresco cycle etc.- and the production of which was often very closely supervised by ecclesiastical authority. Get it wrong as Veronese did once and you could get fingered by the Inquisition. (Now there's a thought!)

I don't understand the articles on this site sometimes. Just a few days ago the phrase was put out to the effect- "don't worry about the rubrics" and we should just stop trying to compare the style of Francis with Benedict as far as beauty goes than today here is a complaint that his liturgical style and vestments are "too bland" in view of the upcoming art show in Venice. The Holy Hour today was lovely with a harp used.

I've always been a bit sceptical about "Art" - as opposed to craftsmanship.

Regarding "intends to commission new Churches", does the good cardinal have any suggestions on how to deal with the problem of steadily dwindling congregations in our present churches?

Katalina,
We have to understand where we are with this particular Pope, the blandness of his style is an observation, not a negative criticism.
The centre of Catholic unity is after all a person, with paricular personal tastes and styles, and we have to get used to them, its the nature of the modern Papacy.

p.s. I do care about rubrics, the Pope does not share my concern.

One of the problems is that the entire Western culture is sinking into kitsch. When societies die, slow deaths, the art suffers, as the soul of the culture is starved of spirituality. There is no true beauty without a love of humanity, either, which is why so many who say they love the poor want to tear down beautiful churches and build bowling allies for worship.

When one forgets who Christ is, that is GOD, and when humanity is degraded, art suffers.

People just ain't got no taste...all in the name of egalitarianism.

The drawings are hideous. Art is a sign of the creativity of man who is made in the image and likeness of God. Anti-intellectualism also kills art as it does true scientific research.

Sad, but I think we are in such a decline that the beauty of all the ages past will fall into gross utilitarianism, the ideology of the communists and the nazis, those who sold their souls to paganism and tyranny.

Rubrics, like movements in ballet and opera, are signs of a higher culture. When we get sloppy or lose our ability to discern beauty, we have lost sight of God Himself, the Ancient Beauty.

PS some seminarians right now on my blog on a course of art and the history of the papacy supporting the arts.

I did not know that the Holy Hour which was scheduled for last Sunday, was actually an hour of reparation originating from Rome and timed to be a simultaneous exposition around the world for one hour!
Did you know that?
It appears that Pope Francis had the liturgy in Latin!
It did take place in our Cathedral here, and, to my shame, I was not amongst the congregation.
How was this initiative missed by so many around the world?
Communication was somewhat lacking I fear.

"his understanding of his Papacy, where everything seems to depend on his personal charm and charisma."

Quite true. As a therapist, I assess his character style as an extravert feeling type (completely opposite to BenXVI's introvert thinking type). Much of his behavior and attitude flows from this. For folks like this, the warm personal encounter is what is most real to them.

Add to this that he is a Jesuit, and much falls into place.

The irony and challenge of this kind of character style for a man who is always talking about humility is that it constantly puts him, his personality and ego, at center stage. He's a bit like a preacher whose favorite theme is the value of silence.

I’m getting just a little tired of hearing Pope Francis being criticized for not being more rubrically correct, not adhering to the ‘letter of the law’ - culminating with the snide comment: “well, after all he’s a Jesuit…”

Enough already! He may not be Pope Benedict, but he is the Holy Father. He is not one to be bound by convention, to be hemmed in by protocols, or to sacrifice pastoral care to procedure.

There is something very Christ-like about Pope Francis. Our Lord didn’t shirk from breaking the conventions of His time. “The Law was made for man, not man for the Law” was His approach. Care for souls trumps rigid rules. And yes, it scandalized many back then also.

We can be too concerned with ensuring that every “i” is dotted and every “t‘‘ crossed – congratulating ourselves that we have done everything strictly by the book, the letter of the law – while we neglect the spirit of the ‘law’.

Yes, rules are important and rubrics are important. We see what has happened over recent decades when rubrics were flouted. But they are not the only important things. If we get bogged down in minutiae, we risk not seeing the forest for the trees. I suspect Pope Francis sees it more clearly than most of us.

GOR,
Right! Pope Francis is not Benedict, nor was Benedict JPII but let us be realistic, no Pope is perfect only God is, nor are we living in "Ultramontania" and accept Pope's have very human failings, as the Gospel writers did.