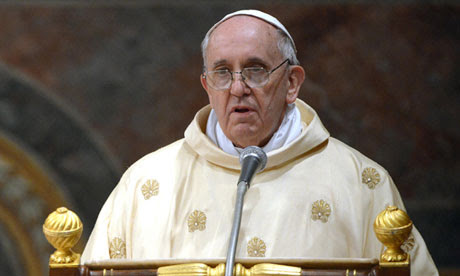 I am sure I am alone but Pope Francis high profiling of  'mercy' has caused me to think about my own being merciful and the extent of God's mercy. It is infinite but it is not unconditional, if we accept his mercy then heaven is ours. That has been the extent of much of our preaching for the last few years, except of course we have not not used the word 'mercy', we have spoken just of 'love'. 'Mercy' is different, God's 'love' tends to be interpreted through a rather human lens, we are familiar with love, we see it in our own relationships or yearn for it in our hearts. When we think of God's love we tend to empty God of his divinity, we are no longer able to distinguish or understand the of a superior for an inferior, the difference in the love of a Father for a child, or of a Lord for his people.

It is interesting that Pope Francis rarely speaks of God's love. Mercy implies an offence, a need for forgiveness, an escape from the consequences of not accepting that 'mercy'. The other thing Francis speaks of, though generally separately from mercy is 'the devil'.  For Christians the non acceptance of God's mercy hell.

One of my parishioners sent me a link to this article, 'Why are we so afraid of Hell' in which the author says:


As I’ve taught classes and given talks on the “New Evangelization,” I’ve been struck at how both Jesus and the apostles make a regular part of their message not only the positive proclamation of the Good News that Christ has, by his sacrifice, won redemption for the whole world, but also the terrible consequences of neglecting such an offer: namely, hell.

Any talk of 'mercy' in a Christian context implies that the failure to accept God's mercy are pretty dire. Speaking of 'love' with its present 'hippy' ramifications makes 'hell' the four letter word which causes most preachers to do more than hesitate.

I have resolved to try and not talk about God's 'love' but to speak of his 'mercy', I suspect Francis has made the same resolution, whether he will start using the 'four letter word' as often he uses 'mercy', I doubt it, the media are too likely to supply image from some horror film but the implications are pretty obvious.
at November 04, 2013

When thinking about Hell I find this most helpful:
" Let us listen at the gates of Hell and hear the lamentations of the eternally damned. they exclaim: "What hath pride profited us? what use or advantage was our pride to us? Everything passes and vanishes like a shadow, and of all of these past evils nothing remains to us but the eternal shame of having been proud.
their remorse is vain, because it is the remorse of despair. therefore, while their is still time, let us consider the matter seriously and say " What advantage have I derived from all my pride..and if I do not insist upon mortifying it, it will make me odious to myself for all eternity in Hell."
"Humility of Heart" Fr Cajetan da Bergamo

Problem with mercy is the pre-requisite of there being something about which to be merciful - and we don't really go in for that these day...
Why forgive when you can excuse and still be on a level playing field? Why be merciful when you can equivocate away any wrong-doing or deny there is any actual fault or failing? Why exercise empathic kindness and charity when you can be a champion of tolerance and denounce everyone else who not as tolerant as we are?
I remember a vile 70s Inwood mass setting of the Agnus howling 'give us your mercy' as if they were free sweets being distributed at a pantomime rather than soul-saving grace bought at an unimaginable price....

Mercy is many things...but I fear that His Holiness's version of it sometimes diminishes or detracts from the reality of what Mercy truly is...an undeserved, unearned gift from an overwhelming fount of Love - which we have betrayed...

So if we're going to talk about sin, and hell and forgiveness and mercy...let's please tell the truth - not recreate these realities in less-awkwardly confrontational and demanding phenomena...

If God died for us: Can't we at least try to live for Him?

Well put, Father, and food for serious reflection.
Perhaps it is a distinction without a difference, but is there a difference between 'mercy' and 'charity'?

Father, as ever an inspiring post. You are right about the otherness of mercy in distinction from Love. I think that is one reason why Pope Benedict used to speak of Charity (or insist it was so translated); charity has more of a note of selflessness than love in contemporaries culture.
I was struck recently in reading the catechism about the way it made the perhaps obvious but often unmade point that seeking forgiveness requires a recognition of one's sinfulness in the way that mercy also requires.
I wonder though whether in Pope Francis' native language, or in Italian, there is also more of a connotation of pity as well as mercy than in English. Perhaps this is why he speaks so readily of the need for forgiveness and the need for reaching out to the poor? Are they both acts of "misericordia"?

It's sort of an irony in the context of this discussion, but it's Mercy that is actually understandable to most men. Most of us will likely depart this mortal coil with a malformed understanding of Love. The very few saints among us will properly understand Love prior to their particular Judgments. But most of us will not properly understand Love prior to our deaths. Mercy, on the other hand, is much easier for us to understand. Concomitantly, it's easier to practice too. God deserves our love. But he condescends to us and allows us the path of mercy too. Hence, the raison d'etre for the Sacrament of Penance. If we were all disposed to true love, we could wash away our sins through perfect contrition, without the aid of a priest. We struggle with this, however. And, God generously allows us the path of mercy.

We ask for mercy during the Kyrie at Mass but I have noticed that Priests in France tend to speak far more about 'la misericorde de Dieu' than Priests do here in Britain where it can simply be about God's 'lurve.'

Looking up the word I found several interesting quotes including one by a French-Canadian writer which seems to sum up the word well.

Students of architecture are familiar with the word 'misericord' in English as these were the often grotesque carved figures on the end of church pews.

I think that mercy is forgiveness, but charity can lead the way for a person to seek the mercy.

Both mercy and charity are different aspects of love (in my mind anyway).

Good observation, although I think that one problem with mercy is it can also be interpreted as, "Yes, I know the Church says its sinful, but God understands...so I don't have to change or bother converting others".

I think that ultimately, one thing that's lost on most people is that God is simple, so his love is is justice is his wrath is his mercy. In us in our fallen state, these seem like polar extremes, but in God there is no tension.

One consequence of this is that Hell is a mercy and an act of love. When we die, God gives us his greatest gift, himself. He has nothing else he can give us. If we choose the creature over the Creator, we will be like Gollum in LotR choosing "our precious" over The Good, The True, The Beautiful and The Life [Song 4:7,Luke 18:19,John 14:6] and being in God's pretence to the exclusion of "our precious" will be a hell greater than Hell. So in God's mercy, he gives us what we want, even if as in the case of Gollum we end up making an ash of ourselves in the fires of Hell. Separated from Life, Goodness, Truth, and Beauty, all we have is Death, Evil, Lies, and Ugliness and like Gollum, we wouldn't want it any other way.

Perhaps Pope Francis's absorption in God's mercy is predicated on his mindfulness of what no Pope has heard since the last papal coronation, that of Paul VI in 1963: "Sancte pater, sic transit gloria mundi!"

(And by the by, though ever depicted on screen as being delivered by a cowled monk, in fact it was one of the Masters of the Liturgical Celebrations of the Supreme Pontiff.)

Dear Damask Rose,
Thank you for your thoughts. Perhaps I am making too much of this but would it be mercy or charity or love which the Good Samaritan exercised toward the man set-upon by robbers?
Is there a difference?

You may find it interesting to go to newadvent.org and read the definitions of both Mercy and Love.

Apologies for not getting back sooner, so I don't know if you're still reading the thread, but here goes.

You ask a difficult question, but after analysis, I think the answer is: love.

Jesus tells the story of the Good Samaritan after being asked a question by a lawyer who states how God should be loved and "love your neighbour as yourself" after Jesus asks him a question.

In the parable the victim is ignored by the priest who should be someone who shows charity to people so they seek God's mercy.

The Levite also ignores the victim. This is someone who worked closely with the priests in the Temple, concerning themselves with running it and interpreting and teaching the law. Ie, they should exercise mercy in the law. Ie, how long someone should be sentenced, leniency, certain considerations.

The Samaritan loved the victim as himself, for he wouldn't want to be left alone to die on an empty road himself.

Think of the laws the Nazis and Communists passed to the devastation of their nation. St Thomas More, excellent example.

Jesus' parable is very important legalistically today because we have gay marriage laws, where Christians could possibly be treated without love because of their views on homosexuality. With regard to abortion, infanticide (I believe "ethicist" Peter Singer promotes this), eugenics and euthanasia, what person in their "right" mind would want this to happen to themselves.

It's love that helps you to look after the aged parent, sick child. If you truly love yourself you'll fight your demons such as addiction, alcoholism and so on.

I think true love of self is not the same as self-esteem because too many people get powered up from all the wrong things.

I think true love of self and others is written on people's hearts, if not through their knowledge of Jesus, but even through the natural law.