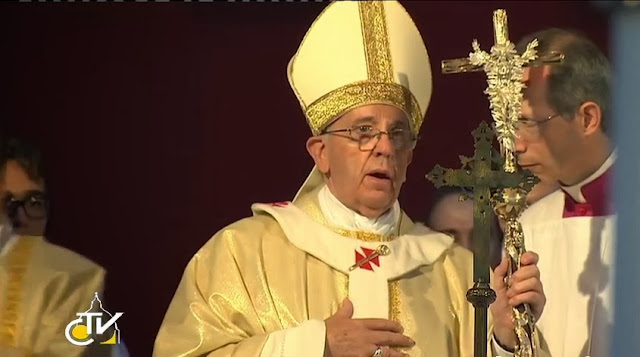 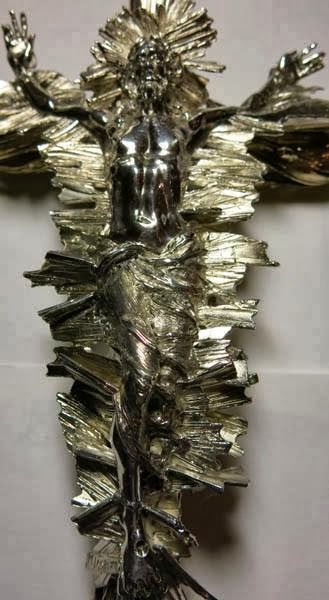 Pope Francis has a new ferula according to Rorate, it was donated to the Pope last month by Goldlake, a mining corporation that is part of major Italian cement holding Gruppo Financo, with mining concessions in Argentina and Honduras (from which came the metals used for this staff).

Personally, I preferred the one he used at Lampedusa, there is something about using the image of Christ as an ornament which is not quite Catholic. I know I'm just an ol' liberal who thinks at Mass there should be just one image of Christ rather than a multiplicity, and then there is the question of the theology pf the image of the risen Christ super-imposed on the Cross, to say nothing of morality of Gruppo Financo and Goldlake. With Francis too there is the question of 'bling'.

Is this what the Pope meant in May with "failure of the cross"?

“Triumphalism in the Church halts the Church. The triumphalism of us Christians halts Christians. A triumphalist Church is a half-way Church”. A Church content with being “well organized and with… all the offices in good order and efficient”, but which denied the martyrs would be “a Church which thought only of triumph and success”, and was alien to “Jesus’ rule:
the rule of triumph through failure.

Human failure, the failure of the cross.
And we all have this temptation”.


MORNING MEDITATION IN THE CHAPEL OF THEDOMUS SANCTAE MARTHAE, Wednesday, 29 May 2013
http://www.vatican.va/holy_father/francesco/cotidie/2013/en/papa-francesco-cotidie_20130529_triumphalism-christians_en.html

Is this crucifix even permissible?

I object to this because it is a lie. Christ died on the Cross. He did not resurrect from the cross. The image is therefore a lie. Furthermore, I think GK Chesterton had the right of it when he said that Catholics hold up the crucifixion and the resurrection at the same time but individually. We do not mix the imagery least we forget the effects of sin and the reason for our hope. He compared it to mixing black with white and ending up with a colour that provides no reminder of either black or white. The crucifixion and the resurrection are like equal arm balances that keep us on the blade of truth. The balances don't work if you put them together. So 0 points to the new ferula as it reflects a lie.

Opportunity! If we can persuade Hanes to sew him a gift fanon, DeBeers to craft him a tiara, and Shell Oil to donate a sedia gestatoria, we'll have him looking even better than Benedict XVI in no time!

How is this corporate gift different from the Mercedes popemobile that was snubbed? That controversy of the "spiritual bouquet" from a few months back; he was dismayed that some Catholics (the uncool ones) would offer such frivolous gifts as repetitive prayers. This, however, is the right sort of item from the right sort of people - is that the message? If not, is there any message at all, besides that the Pope indulges his personal whims without regard for any impressions they may give to his flock, nor even for demonstrating philosophical consistency?

"But we preach Christ crucified, unto the Jews indeed a stumbling block, and unto the gentiles foolishness" 1Cor 1:23

It's just tacky and gauche. And I'm not thrilled with the nasty looking pallium either. The irritating thing is this **** costs a lot of money. If you're going to spend a lot of money, it should be on something of good quality, not something that looks like it was picked up in a junk shop. With any luck, someone will steal it, and sell it for the scrap metal. They'd do us all a favor so we wouldn't have to look at this "thing." If Pope Francis wants to do some poor person a favor he can leave this thing lying around a hostel filled with gypsies. That way it can be a win-win all around. Might make a good cattle prod, however.

Ecclesiastical art has taken some strange turns in the last century or so, but this is just plain hidjus!

The reserfixthemess reminds me of the tabernacle at Holy Name Cathedral in Chicago. I think the Pope should melt it down and have a proper crucifix made.

You could make something similar from the wrapping papers that Ferrero Rocher chocolates come in.

I hope this mining company is environmentally responsible, health and safety standards are up to EU standards at least, and that all its employees are paid a just wage. Otherwise the object should be returned, rather as the spiritual bouquet of 3000 rosaries was "returned"

"Assuredly it is a wise and most laudable thing to return in spirit and affection to the sources of the sacred liturgy. ... But it is neither wise nor laudable to reduce everything to antiquity by every possible device. Thus, to cite some instances, one would be straying from the straight path were he to wish the altar restored to its primitive tableform; ... [or] **were he to order the crucifix so designed that the divine Redeemer's body shows no trace of His cruel sufferings**". -- Pius XII, Mediator Dei #62 (1947)
http://www.papalencyclicals.net/Pius12/P12MEDIA.HTM

Frankly it is more tasteful than the Paul VI one. Talki about damning with faint praise.

Hmmm… It seems to be saying: “We are an Easter People.”

Now, where have I heard that before?

If I were Mgr. Marini I'd be shutting my eyes as well.