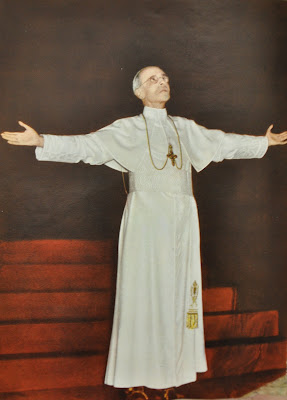 I have a certain feeling of sympathy towards Pius XII, his obvious antipathy towards Hitler, his personal desire to help the Jews in Rome, the huge moral dilemma he lived with constantly, of the temptation to make an outright condemnation of Nazism but fearing the consequences, even his ambiguous relationship with Italian Facism, it makes him human. At the dawn of the age of mass communication he strode the world stage as the embodiment of Catholicism, a counter-weight to those other huge men who strode the world stage and embodied Russia or Germany. It was an age of men who were in a sense 'manufactured' and projected onto the cinema screen in huge images or whose words for the first time could be heard not by at most a few thousand but by millions.

In the case of Pope  Pius there is something endearing about his neurotic belief in monkey glands and quack medicine and that strange nun that governed the papal apartments. What I have never been able to understand is the reverence those who style themselves 'trad' Catholics have for him, he was after all the patron of those ant-heroes of the traddie world like Bugnini et al.

The good Fr Hunwicke is back, he makes the suggestion that Vatican II was really not that important, that Pius XII had already laid the foundations for radical liturgical reform.

The fontal point is this: The process of change was already firmly in place. I do not think that the Council, in fact, made any real difference whatsoever. My train of thought was started by reading some words which Annibale Bugnini wrote in the Preface to his 1956 Commentary on the new Holy Week liturgy. I give my own translation of his Latin:
"When the Easter Vigil had been restored, a certain keen liturgist did not hesitate to assert: Pope Pius XII, in the history of Liturgy through the ages, will be 'The Restorer of the Easter Vigil'. Now, indeed, by the help of God's grace he is to be called 'The Restorer of Holy Week'; while in the secret of our hearts we do not doubt that still greater things await this indefatigable Labourer, and it is very likely (nec veritatis specie caret) that He will be 'The Restorer of the entire Sacred Liturgy'".

Fr Hunwicke's point is that previous Pope's had seen themselves as 'guardians' of Tradition, whilst Pius XII saw himself as the Pope could do anything. Personally. I can't help but see him as another of those Colossi of the 20th century who thought they could do anything.

I think it will be very interesting to see, over the medium term, how Pope Francis understands his Ministry. It can be easy for a good man with admirable motives and who is facing real problems to use the power which his position gives him to take short cuts. It takes a very learned and a very truly humble Pontiff - such as a Benedict XIV or a Benedict XVI - to understand, and to internalise his perception of, what  he ought not to do (and I'm not only talking about Liturgy). Pope Francis's two recent utterances which bear upon the Hermeneutic of Continuity make me cautiously optimistic. If this man can consolidate the gains made by our beloved Pope Benedict XVI and at the same time prudently develop the teaching of the Magisterium about the Preferential Option for the Poor, he could turn out to be a great Pontiff.

Pius XII has been dead now for over 55 years and is still being re-evaluated. Which shows, first, the old wisdom of waiting at least a century before canonising anyone, and second, that judgements on popes are best left to the great-grandchildren of their contemporaries. And composers too, for that matter. Why has BBC Radio Three been full of Britten this weekend, on his hundredth birthday?

who can say? who's subject to Popes anymore, other than confused laity or publicly disgraced clergy - who takes stock of the 'teachings' of popes anymore other than confused clergy and wolverinemedia? Pius IX had the social sovereignty of the Church falling all around him - enter infallibility - which seems to have marinated for a while then gone all Caesar for some. Really, Pius XII would on his lonesome have been a snowball to have caused a VII-like avalanche on altars, rails, language, confessionals, fidelity, liturgy, belief and even submission to the Pope? wow, that would make him a powerful instrument for the enemy.

It's disturbing to read that he re-gigged Holy Week for some reason...I guess it only takes a human engendered hairline crack for the sacred 'hermeneutic' to let in the 'smoke of satan'.

Maybe there'd be less satanic smoke if there were a little more holy incense in the church of amnesia. I know there are parishes all over the place where they'd be lucky to have a priest whistle-stop for confession and Mass once a month...so why the commitment to the priestly laity at the expense of the priest, without whom, the laity cannot even 'assist' at the Holy Sacrifice of the Mass?

We have no dispensation to turn bread and wine into body and blood, or to absolve sins.

I've always had the same impression of Pius XII.

He did indeed pull the lever of Bugnini's Perpetual Motion Machine. However, I think the proscriptions of Mediator Dei, had Pius lived as long as Leo XIII, would've given the Church and the world a far different outcome.

I have often wondered the same thing Fr. Blake. An aged heretic deacon I'm acquainted with (openly pro-women's ordination, thinks the Church "just isn't ready for it yet"; deeply and publicly and repeatedly and gratuitously contemptuous of the TLM and Latin in general; etc.) speaks fondly of Pius XII as the man who paved the way for Vatican II.

Evelyn Waugh complained about his Holy Week reforms on the grounds that they produced a vastly impoverished liturgy. Stefano Carusi said the rationale for the reforms were "permeated by a mixture of rationalism and archaeologism imaginitive in its contours." Sounds like something else we can think of.

Nino Badano called Pius XII "undeniably great" but added that he was "obsessed with a formalistic perfectionism which made him regard as increasingly important the teaching authority of his governance," a perfectionism which led him to disregard the inestimable traditional value of the Vulgate Psalter and allow its modification out of a "scruple of philological precision."

And of course, as you say, he promoted so many of the men who were the Council's villains -- Augustine Bea was his personal confessor, Bugnini was his go-to liturgist, Josef Frings was elevated to the Cardinalate by him, etc.

Really it reflects a weakness in the Trad narrative concerning VII altogether: where did all the bad conciliar bishops come from if VII was the source of all the Church's woes? They were already in place; and many (perhaps even most of them) were appointed during the long reign of Pius XII.

Vatican II was used. Fr Hunwicke’s summary “a common analysis” is correct but he is right in saying that the situation is much more complex than that.

A process of change was in place, but that does not alter the fact that the Council was a golden opportunity to the Modernist Reformers who had been planning and scheming for decades to fundamentally change the Church, and they seized on the Council and exploited it to the full, both during and particularly afterwards, their prime weapon of choice being the liturgy, but their intent stretched well beyond that. This was exactly what St Pius X so expressly warned us about.

John XXIII’s action in calling this Council, for no real reason, against advice and at a time of extreme social upheaval was, shall we say, unfortunate.

Two things to hang on to in the midst of the resulting shambles and meltdown which Pope Francis has to deal with is, firstly, that the Ancient Catholic Mass was not and could not ever have been abrogated (Ref Popes St Pius V and Benedict XVI ), and, secondly, it is on this that we must rebuild the Church. But we will need another Council, this time called for good reason.

Pius XII is revered among the Trads, especially the sede-vacantists or those close to sede-vacantism, because he is the last "true pope." Under ultramontane theology, any true pope is something of a demi-god. A true pope can do no wrong. This applies to both flavors of ultramontanes: the rad-trads and the neoconservatives.

So wherever you chose to draw the line, in terms of when the Church became apostate, those popes preceding are near angelic in nature. Those coming after are reprobates. No matter how liberal the former popes were and no matter how traditional the newer popes were or are.

That's how I read many of the "rad trads".

Interestingly, the radest of trads draw the line at the first "modern" pope, Pius X. There are folks out there who view the modernizations under Pius X as acts of rank apostasy. To these men, Pius IX was the last true pope.

But I agree with you, there are many aspects of Pius XII’s pontificate which make one scratch his head. The elevation of Bugnini. The full-throated support for the United Nations – and doing so using language about the brotherhood of all men and ending all wars among men, as admirable goals of the UN. The more modern popes have never used the language that Pius XII used in support of international cooperation and development.

Was it Metternich in 1848 who complained of Pius IX that he was a liberal Pope?

Was it Newman in the 1860's who complained at the unnecessary calling of Vatican I?

Pius XII directed and wrote a movie about his role as Pope, spoke on TV and broadcast directly to American schoolchildren by radio in English one of the many languages he spoke fluently. He was very modern. It's the 'spirit' crowd who misrepresent him not the trads.

It was very frustrating during the JPII era when all of these observations were just shouted down as regressive and simplistic.

For any who might have missed it, Fr. Hunwicke has a great follow-up post today (first part of several) on the Pian profanation of the Psalter: http://liturgicalnotes.blogspot.com/2013/11/organic-development-1.html

Far from being a "Guardian of Tradition" Pius IX is on record as declaring himself to be Tradition. Writing about Vatican I, Bishop Butler suggests that as a private theologian Pius propounded an heretical view.

As you were saying no-one is good but God :)