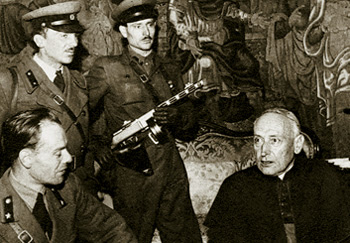 I had a free night recently and watched this 1950 film, Guilty of Treason it is about the persecution and trial of Cardinal Mindzenty, it reflects its culture and its time but it contains the central message that no political regime can tolerate. 'Mindzenty must be destroyed', is the central message of the film.


Earlier I had read an article about a new document by the International Theological Commission, entitled "The Triune God, Unity of People. Christian Monotheism Against Violence ", which was commissioned by Pope Benedict, which identifies modern cultures as polytheistic: if there are many gods then there are many truths. Monotheism says there is one Truth, polytheism can happily exist with multiple or even conflicting truths. Hence modern western culture is pro-gods but ultimately anti-God and desires the destruction of God.

I am afraid my source is Eponymous Flower, the translation is a bit painful but I am grateful they make an attempt. It is significant that the document speaks not only about why the Church is persecuted today but also how. If you watch the film you will see that almost 65 years on things haven't changed, either the reasons for persecution or the methods. Magister also has short piece on the same document.

In Mindzenty's case persecution was because of his stance on the education of children and involved first the destruction of his reputation, then the destruction of him as person.
It is a sad reflection on the Church's history that in the 1950s/60s Mindzenty became an embarrassment to the Holy See and was as much a thorn in Cardinal Casaroli's side as he was for the Communist regime.


József Mindszenty (29 March 1892 – 6 May 1975) was the Prince Primate, Archbishop of Esztergom, cardinal, and leader of the Catholic Church in Hungary from 2 October 1945 to 18 December 1973. For five decades, he personified uncompromising opposition to fascism and communism in Hungary in support of religious freedom.[1] During World War II, he was imprisoned by the pro-Nazi authorities.[2] After the war, he opposed communism and the communist persecution in his country. As a result, he was tortured and given a life sentence in a 1949 show trial that generated worldwide condemnation, including a United Nations resolution. After eight years in prison, he was freed in the Hungarian Revolution of 1956 and granted political asylum by the United States embassy in Budapest, where Mindszenty lived for the next fifteen years.[2] He was finally allowed to leave the country in 1971. He died in exile in 1975 in Vienna, Austria.

Being that my family was from the old Czechoslovakia and active in Eastern European politics, Mindzenty was legend in our house and spoken of regularly. In other words, he was never forgotten. This man was a symbol of the spirit of the Church Militant. God bless him. I like to think he was behind the election of Blessed John Paul II, spiritually.

To Catholics of a certain age Mindzenty was regarded as a heroic defender of the Faith. He spoken of in awe and prayed for intensively.
That he became an embarrassment to the Church hierarchy is to pinpoint the time when Catholicism began its slide into compromise with its enemies.
He was a true martyr, but who now remembers him? His airbrushing from Church history leaves behind a stain of shame.

Being brought up in the UK Cardinal Mindzenty was a hero for us too. Cardinal Casaroli - well I think I have heard his name before but I doubt if he will be remembered.

In Argentina the story went round that, just released, he said in a press conference that there was no such thing as a "Silent Church", but a "Deaf Church, yours!".

Poor Cardinal Mindzenty - sold out by Paul VI: the latter whom Rome is now trying to canonise and for what exactly? For setting off the "auto-demolition" of the church?

Truly the lunatics are in charge of the asylum.

Adulio, Paul VI should be canonized for the holiness of one thing he did-write and promulgate Humanae Vitae-the public turning point of the Church in sexual ethics. And, praise God!

His Memoirs are very important reading.

It is heartening to read of Cardinal Heenan's support (he referred to him as a 'prisoner of conscience. He refused to purchase freedom by betraying the Church of Christ. He is the St Thomas More of modern Europe.)

However, the Holy Father's desire to maintain relations with the Hungarian authorities at all costs led him to feel utterly betrayed, particularly when his See was declared vacant against his will: the last chapter of his book dealing with this is called Complete and Total Exile , and concludes: 'This is the path I travelled to the end, and this is how I arrived at complete and total exile.' He refers here not to his brutal treatment by the Hungarian regime, but his treatment by the Church for which he had suffered so much.

The Vatican behaved disgracefully towards both Mindszenty and Lefebvre. Paul VI's pontificate was a disaster for the Church. Casaroli and Bugnini could have achieved nothing without his backing. I felt a deep sense of shame at the time, and there are still some very guilty consciences in Rome.

Supertradmum - since when the church canonise popes for simply doing their job? Could Paul VI have done otherwise? It was the Holy Spirit that prevented Paul VI from teaching anything different to what the church has always taught on marriage and procreation.