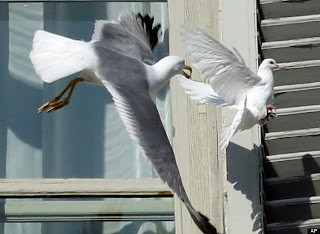 In the spring my parishioners are often distracted by fornicating pigeons on the glorious east window, the rest of the time they roost quietly leaving their droppings to stain the stone work and to fall on the plants in my postage stamp sized garden. When I look see them Tom Lehrer's solution comes to mind.


But we all know that would be illegal and wicked. I have been urged to think 'spikes' but that I think would be even worst than pigeon detritus dropping down from the window. I am told that a plastic owl or a kestral would scare them off, but only for a while. My pigeons are close relatives of doves, they both belong to the genus columba: so after the incident on Sunday in St Peter's Square, would the Franciscan solution be the answer?

Brighton is full of gulls, they rip open bin bags left outside the cities restuarants and leave rubbish all over the place. In Latin of course they are larus argentatus, just like the one that seems to have taken up station on the chimney of the Sistine Chapel during the Conclave and attacked the dove Pope Francis had released.

Rather than having a Conclave, would a few sprats in my freezer occasionally thrown into the garden attract a marauding larus. I want one to take a franchise on the garden and the church and declare it a no-go territory  for pigeons, whilst leaving the rather friendly blackbird that nests in the shrubbery to get on with his family life with his wife and chicks.

If a gull can take up rule of the Vatican why not here?

May I suggest, Father, that you might count your blessings that it is only pigeons you must coax from the edge of the roof? Proactive planning for the near future would seem to require a strategy for persuading over-excited Catholics from the edge.

Father: Better the devil you know. I think you'll find that larus argentatus is a bigger pest than columba livia. During the nesting season they are wont to attack anyone who strays too close (even if the nest is 100ft above street level) by dive bombing them - sometimes spraying faeces or vomit at the same time. In Aberdeen city centre (home to the largest colony in Europe) it is hazardous to walk down certain streets in the months of May and June.

'Would a few sprats attract a maurading larus?' They would probably attract two dozen of them all at the same time! And they are much bigger than pigeons and make more noise. If you were to do this, later on you would be asking how you could get rid of seagulls!

The spikes seem to work on the railway stations - the pigeons just avoid them and go elsewhere probably to St MM.

heheh. brilliant song. I wish I'd known about it in the few years I spent fighting the rats on my window ledge. I ended up getting a toy gun with little plastic pellets and would shoot at them of an afternoon. The High street was littered with them. The pellets, and the pigeons. You can hire a falcon to circle above and infested place to scare them away, but apparently things get illegal if the bird of prey decides to have pigeon pie.

who is the Saint of getting rid of winged rats?

p.s. i should add that unfortunately no pigeons were harmed in the shooting of the pellets.

Airport authorities use recorded bird distress calls to shoo away birds from the runways, and a quick googling revealed a company called birdgard which offers this service. I wonder if it is any good?

I can attest that the upturned spikes and plastic owls work quite well for getting rid of the b******s. When I went to Immaculate Conception in San Diego, we were about as far from the ocean as your parish is in Brighton from the ocean. BEFORE the spikes/owls, the "winged rats" used to love to perch over the doorways, where people going in and out would too often get nailed. So the upturned spikes were over the ledges over the doorways, and the "owls" flanked and guarded the spikes. No Issues. From then on, the b******s confined themselves to the palm trees, which at least, were on the lawn and not near the parishioners. I must concur re: BB pellets. Lots of luck with that one. When I was in high school, we were also pretty close to the ocean and got a LOT of Sea gull visitors at lunch time looking for dropped burritos or whatnot. Smart kids avoided the open court by the retaining wall as the gulls were particularly bold there waiting for opportunity. One kid must have gotten hit one too many times, because one Monday at lunch time the court in question was simply COVERED with a few hundred BBs. Presumably a schoolmate had a fine old time that weekend. There were some feathers, but the gulls were pretty much back in full force in a week or so.