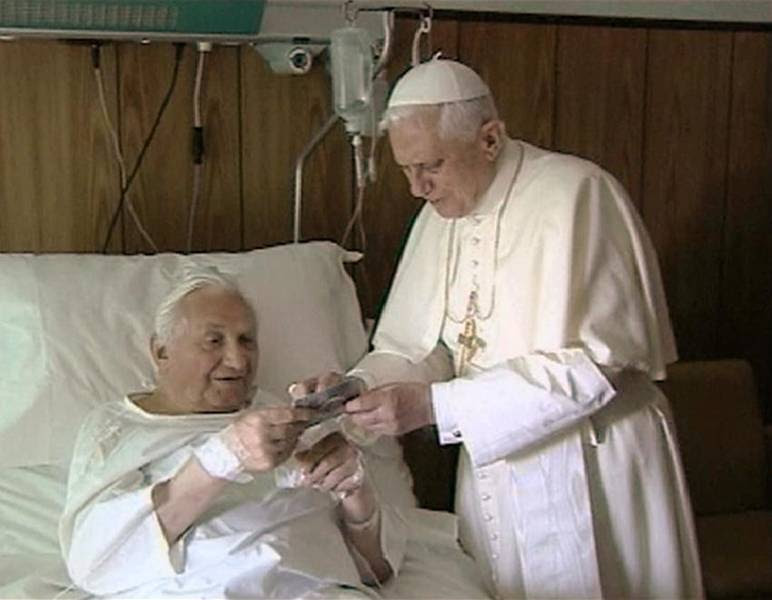 If you would be kind enough to indulge me, Father, and to forgive this posting which may be narrowly construed as somewhat off topic if not eccentric, I would like to share a prayer of my own construction which I offer every day in light of the diabolic disorientation rampant in the Church and the world today:

“Almighty Father, I beg of You in the Name of Your Dearly Beloved Son, Our Lord Jesus Christ, to grant to me and all those for whom I pray and for all mankind, the radical and extraordinary Grace whereby our hearts, our minds, our souls, our lives, our wills, and our consciences will be illuminated by the light of Your Truth and Mercy so that we may know all those sins which we have committed and for which we have yet to ask Your forgiveness; all those sins of which we are unaware; all those sins for which we may have been forgiven but for which we have yet to make sufficient reparation; and that we might know every person, place, thing, and circumstance in out lives that is an occasion of sin for us and an obstacle to our eternal salvation.
I pray Almighty Father that You grant to each and every one of us the radical and extraordinary grace of conversion, repentance, and final perseverance that none of us will be lost to the fires of Hell.
May we always worship You in Spirit and in Truth and may our only desire be to know, love, and serve You as You desire to be known, loved, and served.
From a sudden, unexpected, and unprovided-for death in Your Mercy deliver us.”

God bless the Pope Emeritus and his brother!

I could be wrong but I think since this was a private visit and this picture is out of date, IT might have been taken into August 2005. The reason is that the Pope Emeritus is not dressed the way he should be since he is no longer the reigning Pope. I heard that the Pope's brother was released from the hospital today.

I'm sure I saw that photograph years ago, soon after Benedict was elected. In any case, he's dressed papallly, so can't be recent.

" …It is true that while at the moment we find we can't live with the bishops, we know, too, that by God's design we can't live without them, and that there is only so much we can do. But have we done even that much? Have we prayed and fasted and done penance and really begged God on our knees to convert the hearts and minds of the bishops? Have we consistently pleaded with Him to take the hirelings who will not respond to His grace to their early reward, and send us real Catholic Shepherds in their stead?

… Christ Himself told us, in the parable of the unjust judge, that we should pray continually and never be discouraged [Lk 18 1:8]. … Our Lord told the people: "will not God give redress to his elect, when they are crying out to him, day and night? Will he not be impatient with their wrongs? I tell you, he will give them redress with all speed." And then Christ immediately adds…, "But ah, when the Son of Man comes, will he find faith left on earth?"

And so…are we really praying for the conversion of the hirelings or their replacement by strong, solicitous, Catholic Shepherds – as if we believe? Given Christ's promise, I can't imagine that enough of us are." Ron Pead.

Surely you mean "Father" Ratzinger. I the caring a and sharing new Post Vatican II Church the title Monsignor has been expunged. Yet I have just realized those who are already Monsignor keep the title. If I were Benedict XVI brother I would ask. Why did you give up? You abandoned the struggle for continuity and let an interloper in!

"Post Vatican II Church the title Monsignor has been expunged..." This is simply not true. There have been changes relating to, for example: the dress of monsignori; how they are addressed; the classes thereof. But they have NOT been abolished.

The Italian daily, Il Messagero, reported on September 13 last that Pope Francis had called a halt to the naming of new monsignori pending the outcome of the Council of Cardinals completing their review of the Roman Curia. It was unclear from the reports that followed whether this applied solely to the Curia or not. Nor was it clear what may happen in the future.

What a lovely photo!

Maybe some of my catholic friends here can answer: why did such a extraordinary pope like Benedict give up?

His resign did a lot o damage to the Church, cause a modernist took control of it (and I write from Argentina).