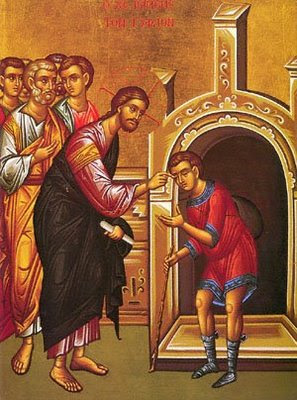 Last week the airwaves buzzed with the first moments a woman born deaf heard for the first time in her life, her story helps us understand something of the extraordinary excitement, delight and confusion of the man in today's Gospel who was born blind and brought by Jesus into a new world of sight. Imagine being able to see the shape and colour and form of objects one had only touched and felt.
In the icon he comes out of some dark place, Plato's cave perhaps, the world of shadows and illusions, the world in which phantasms are mistaken for realities and realities for phantasms. He comes out of the dark place, he turns his back on his past, he must do that because he faces Christ the light, he turns a way from death to the Way, the Truth and the Life. He turns to the Lord, he is reorientated, his life is given a new orientation, he becomes with Christ a creature of Light, no longer overcome by darkness, because darkness cannot overcome Christ nor those united to Christ, nor his Church.

We Christians are called to be salt that gives savour, leaven in the lump above all light in darkness. Down the centuries we have been persecuted for that. The more clearly the Church teaches, the more she shines in the darkness the stronger the persecution against her and her members.

The Graeco-Roman world was not dissimilar to our world, the attitudes to life and death, to sex and pleasure, to pleasure, to wealth and poverty, yes even to religion were not unlike ours. When I read S Paul's letters to the Corinthians and few decades later Pope Clement's letter I imagine he is writing to another seaside: Brighton. Corinth was like our city, a seaside town 'much given to pleasure'. Neither the ancient world where the Gospel was first preached, nor its inhabitants were much different from our world.

Where abortion and infanticide where regularly practiced Catholic Christians upheld the sanctity of life from the moment of conception, even going to search for exposed children on city rubbish dumps to bring them up as their own. Where there was sexual license, in the Graeco-Roman world pederasty, homosexuality and prostitution seem to have been rife, Christians proclaimed restraint and marital fidelity.

Christians understood they were called to offer an alternative way of seeing the world, that they were light in darkness, as our world slips into encroaching darkness, more and more it needs clear Christian light.
at March 30, 2014

God bless you for this post, Father. It's rare, and good, to be reminded that we ARE supposed to be a contradiction to the world.