I am not a conspiracy nut, I believe that human beings tend to act like the starlings that circle over the ruin of Brighon's derelict pier that I can see from my window, they move together, there is nothing random about it. We seem to act together

One of the things that I have been fascinated by is the routing of the Labour Party in Scotland, in a way it is mirrored throughout Europe, good old fashioned socialist or Christian democratic parties  have lost traction with voters and really apart from "Equalities" have few policies that are very distinct from those of their mates who sat on the other side of the university PPE lecture theatre and now sit on the other side of the parliamentary debating chamber. There is a sameness in politics and politicians, it is only personality or lack of it that brings in a distinction.

The Labour Party here are asking advice from voters about their future. My advice would be forget about the rubbish of the past fifty years and go back to fighting poverty and being on the side of the worker, raise up the downtrodden and the disadvantaged, in fact I would give then the same advice Pope Francis might: start putting the family first. 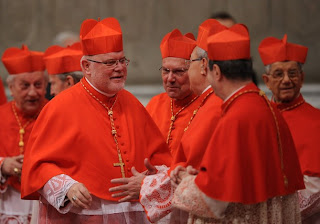 The Synod on the Family could have been a wonderful moment for renewal not just in Europe but throughout the world, it now looks as if it is going to be nasty little congress to discuss everything which is anti-family, pushed by those who ideologically oppose the family or at least the Christian family. Yes, I blame Cardinal Marx and his brothers who for some reason want to distract the Synod from its purpose. Why? What a good question, cui bono? Catholic liberals tend to flock with political liberals. I am told that at one of those Conclave planning soirees it wasn't just devious liberal old Cardinals from failing Churches who gathered but politicians, financiers, media moguls.

What if we did address, "The living conditions that put the family to the test and render it vulnerable, starting with poverty," What if we took seriously Pope Francis' call that, “We must endeavour to stay ever closer to families afflicted by poverty”.... “In effect, social misery affects the family and at times destroys it. The lack or loss of work, or its precariousness, have serious repercussions on family life, putting relationships under stress. The living conditions in the most disadvantaged areas, with problems regarding housing and transport, as well as the reduction of social, healthcare and educational services, cause further difficulties. Added to these material factors there is also the damage caused to the family by false models, propagated by the mass media, based on consumerism and the cult of appearances, which affect the poorest social classes and increase the disintegration of family bonds”. 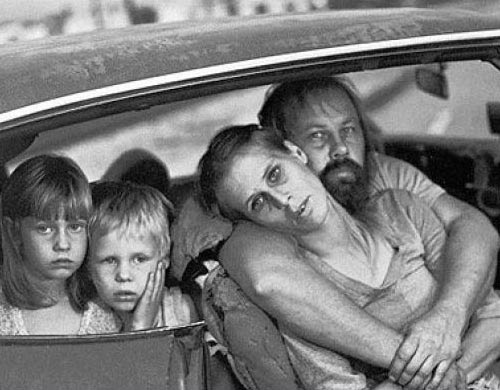 It is not merely murder or sodomy that cries out to heaven for vengeance, it is also oppression of the widow and orphan, and depriving the worker of his just wages or of any wages, or simply leaving him to starve.

If we give priority to the family rather than the individual then we start with a radically different model of humanity. If we could build a new politics that saw the human beings not as a selfish and self obsessed individuals but as family members that had a self-sacrificing love for the other members of his or her family and society as a whole.

Joe Shaw draws attention to an article in the Economist that casts light on the malaise within our society.

We need to ask whether the politicking that has dominating the world since WWII is still of value. Can we still continue with something which was either a critique of or collaboration with 19th century Capitalism, Are we ever going to have full employment again? How do will deal with class conflict, which has now transmogrified into gender conflict? How do we address the cheapening of human life, the elderly, the unborn, people from sub-Sahara Africa? How will  we deal with young people who may never work or societies where substantial people will never marry because of sex selective abortions? How do we deal with the lack of fulfilment so many people experience?

I think these might be some of the questions Pope Francis in a rather Blatteresque way is asking us to address. As in much that concerns the Church the answer is often clearer than the question, for us the answer is: THE FAMILY stupid!
at June 04, 2015

When it comes to the persecution and demise of the reality that is family, the root of the rot lies within the Church. We must remember that spiritual realities are far more real than earthly realities. What does this say about the liberal bishops lobbying against marriage and the family at the previous and upcoming Synod on the Family? It is not the Church's mission to align itself with the state but to call it to conversion. And, no matter how hard they try, be they bishops or priests, they can never be politicians or an ordinary man again. By virtue of the sacrament of Holy Orders, ontologically they have changed. They are spiritual priestly fathers to diocesan and parish families. Both of which are expressions of the great family, the Church.

What a good blog post Fr. And a good comment by you Greg. The family living in the car was very very sad to see. You are right it's THE FAMILY that matters.

Thank you, Fr, for this wonderfully balanced post. It is good to see something which is true both to Catholic social teaching and to Catholic teaching on the family. So often people choose one or the other rather than both!

False compassion for the vulnerable, squeamishness about standing up for the tough but effective love of traditional Catholic teaching - that is the cause of so many social ills.

I believe in conspiracy, whether in politics, business or the Church. It's all round us.

Good conspirators are good opportunists, as were the nationalists in Scotland. Here, in the west, there is a non-working class, mainly of 2nd, 3rd generation Irish immigrants, which they cleverly exploited.

For the Synod, here we have a faction in the Church exploiting the family to bring about the reception for adulterers of Holy Communion, a cover to push for the greater objective of acceptance of active homosexual practise. Pure classic conspiracy!

The Secularist world is striving for hedonism. Conspiracy! We must, as Catholics distinguish between starvation and exploitation of the poor,and poverty. Christ after all called us to poverty, Matthew 19:22.,He did not call us a North-European middle-class standard of living which all now, consider to be a “right”.

Which brings us back to the family, the last bastion against the collapse of our civilisation and indeed Faith. The conspirators are increasingly trying to destroy that. You don't have to be clever to see that. Just look.

The Good Lord did not advocate state action he said "Sell what thou hast and give to the poor".

Thanks to the Chesterton Review I found the following extract from a play that GKC wrote in 1927 (nearly a hundred years ago) prophetic:

"Suppose you have deposed your tyrants and created your republics, suppose that a hundred years from now your earth is full of your free parliaments and free citizens. You have often reminded me that Kings are only men. Suppose you have discovered by that time that citizens are only men. Suppose that those wielding power should still be bad men. Suppose that your parliaments are as unpopular as monarchies. Suppose your politicians are more hated than Kings. Suppose that there returns to you war, the ancient enemy of mankind, laying the world waste and leaving riddles to be read by a decimated race of demagogues and hucksters. If in that far-off day you are thus disappointed and embittered, I ask of you one thing. Do not in that day turn upon the people and curse them, because in your own whims and fancies you have chosen of them more than man can give. Do not be like Gulliver, your great namesake, Jonathan Swift, who saw so clearly where the world was going, and turned on them and called them Yahoos. When your parliaments grow more corrupt and your wars more cruel, do not dream that you can breed a Houyhnhnm like a racehorse, summon monsters from the moon, or cry out in your madness for something beyond the stature of man. Do you in that of disillusion still have the strength to say: these are no Yahoos; these are men; these are fallen men; these are they for whom their Omnipotent Creator did not disdain to die."

i just see what cardinal marx and his brother cardinal kasper has done to the teaching of jesus christ and i feel like crying. the worst type of heresy that exist is that which teaches the catholic faith in its truth and then adds a little bit of poison into it.

Cardinals Marx and Kaspar are doing a disservice to all of us; especially the Catholic German families. They are so busy promoting lies they fail to see the reality that Germany has now replaced Japan for lowest birth rate. As a matter of fact it is the lowest in the world. Prayers for them and the whole world.

I'm temped to add, Heaven forbid, but that's all ready been written!

It would need, amongst other things, a sharpening of Catholic Social Teaching, in particular, to clarify points which have always been fudged. A task for the laity is to flesh out the principles of Distributist economics - fundamentally sound but lacking in the fiscal and legal framework which would be needed to make a Distributist economy a reality.

Independent - remember, all rights of ownership of land are derived from the state.