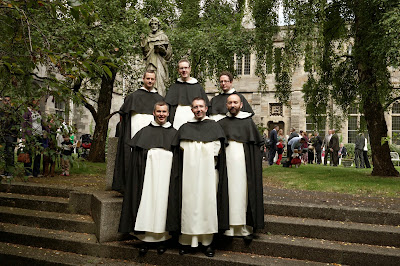 Having just written something which I find quite depressing, here courtesy of NLM is something I find quite exciting, more importantly it is an Irish story, one that is full of hope.

In contrast, in January a Dominican vocations retreat in Cork was oversubscribed at St. Mary’s Priory and two more were added in March and April. The early events drew a total of 20 men to whom the idea of a simple lifestyle and a clear identity appealed at a time of uncertainty in the lives of many.
In the fall, the Dublin-based order enrolled five men, joining 20 other Dominican theology students. They will become part of a community of 175 priests in 18 priories or communal houses across Ireland.
Their rising numbers in Ireland have made the Dominicans the envy of other orders, which have sought to copy their recruitment methods.
“They’re the most successful to the degree that they were online and on the Internet at an early age, and had a blog before the other orders were catching up,” said Terence Harrington, a vocations director for the Capuchin order in Ireland, which has taken to Facebook and Twitter. The Irish diocese now has an iPad app for people considering the priesthood.
Typically, it takes eight months to two years for prospective candidates to decide whether to join the order while working with a Dominican mentor, like Father Dunne. With that period to reflect, the attrition rate for new entrants has dropped to 15 percent, Father Dunne said.
Maurice Colgan, 41, a former social worker for drug addicts who was ordained as a Dominican priest in 2011, said he was still adapting to his lifestyle.
“My hat goes off to diocesan priests, but I don’t know how they do it without community life,” he said. “Today, you need the support of your brothers. Now, of course they may annoy you and you annoy them, but that’s natural in a community.”
At one recent retreat, prospective recruits were invited to imagine themselves as black friars, as the Dominicans are nicknamed, gathering for evening prayer at the 19th-century St. Mary’s Church in Cork, where the order first arrived in 1229.
The guests included a university student, a government lawyer and a schoolteacher drawn by the order’s Web site, which is stocked with videos, among them one of a friar snowball fight set to the song “Eye of the Tiger.” Later, the group crowded at a long wooden table for a traditional Irish fry dinner of potatoes and sausages.
Some of the Irish candidates said they were impressed by the order’s rising numbers and openness to newcomers.
Matthew Farrell, 38, a former bartender from County Offaly and a novice, said he had sampled other orders, like the Carmelites. “I’ve been searching a long time for a vocation,” he said. “I wanted to get married or wanted to do something else. I tried to visualize myself as a priest.”
But in the end, he said, the Dominicans won out. “The Dominicans have a lot of enthusiasm and energy,” he said, “and I liked the fact that they wore habits.”

I have much respect for the Irish Dominicans who in a society and a national Church which is fast losing any vesture of Catholicism are strongly and joyfully orthodox and Catholic. May they go from strength to strength.
at July 17, 2015

As I mentioned to you a year or more ago, Father, the Irish Dominicans are seriously on the road to recovery. The English Dominicans have been so for at least 15 years. This is in itself interesting, because the OPs in both countries were the first to go nutty, well before Vatican II. Now they are the first to recover. Please God this is a harbinger of the future! I pray that this is the first sign that things are about to get better.

I don't think that, as the Capuchin guy says, its down to smart use of the internet that the dominicans are doing well in Ireland. Its probably down to thomism, which hopefully they have rediscovered after these last few decades of misery and nonsense.

Other than the dominicans, I view most of the religious orders as being burnt out and moribund. Some of them (eg Jesuits) seem to do more harm than good in the modern era. Nevertheless, well done to the Irish dominicans for this good showing and long may it continue.

But imo, The priests who will revitalise and ultimately save the Catholic Church belong to much more recently formed organisations: SSPX, FSSP, ICKSP etc

I trust they say the Holy Sacrifice of the Mass in their own Dominican Rite!

And yes G., those orders will contribute so much to saving the Church. When in Heavens name are we going to get that soundly Catholic group the SSXP "Back" into the Church?

Yes, Gabriel, the difference is the Dominicans are more orthodox and serious about doctrine and liturgy while the Capuchins show little sign of the Faith or even adherence to the moral law, here in Ireland. The "reason" given is absurd and an insult to prospective seminarians.

I'm biased on this matter, being an Irish lay (aka 3rd order) Dominican but knowing all the men pictured in your post, I'd say it's the clear identity they have that's so attractive. They know who and what they are as Dominicans, as preachers; when talking to them I find that I can take it for granted that the fundamentals of Catholic belief are a given not an item for debate. Not that there is uniformity in every question but debate tends to be within rather than beyond the boundaries of Catholic belief. That, and they have a secret weapon - NUNS! Sr Breda and the community at Siena Monastery near Drogheda are the spiritual powerhouse of the Irish Province. They live a life built on prayer before the Blessed Sacrament, and that is what gives traction to all the other (very important) initiatives. Habits don't hurt either, they help, a lot!

Sadly, the Order here won't offer the Traditional Holy Sacrifice of the Mass. I pray this will soon change. I know some of the seminarians would like to know how to offer the Ancient Dominican Rite of the Holy Mass.

I believe they do their philosophy and theology in Oxford, rather than in Ireland - that may be more significant.

That's good hearing, Father. Thank you for making me aware of that. I don't think I've seen it in the Irish Independent or Irish Times. I'll go back and rummage through my old news files. I'm certain they would have given it full coverage.

They go to Maynooth (!) and then, after, I think, do most of their theology classroom learning inhouse. That's a photo from the ordination to the diaconate last year.

I'm not sure why the (!) after Maynooth but that is where they have done their philosophy in recent years. Unless you are very familiar with Maynooth's two universities, three institutions, and history since 1997 don't read much into that. The philosophy department has been generally sound although it is in the firmly secular NUIM. The Irish OP students did go to Blackfriars for a time but they have developed an in-house programme at St Saviour's since then. The lynchpin here is the Regent of Studies who brings a wide array of talent to teach in the Studium mostly from within the Order but also occasionally from outside. Further study is usually undertaken either at Rome or Fribourg.

Pace Lynda they are not seminarians but brethren in formation. There isn't any great apparent enthusiasm for the Dominican Rite but there some hopeful signs. Watch this space, I'd say.