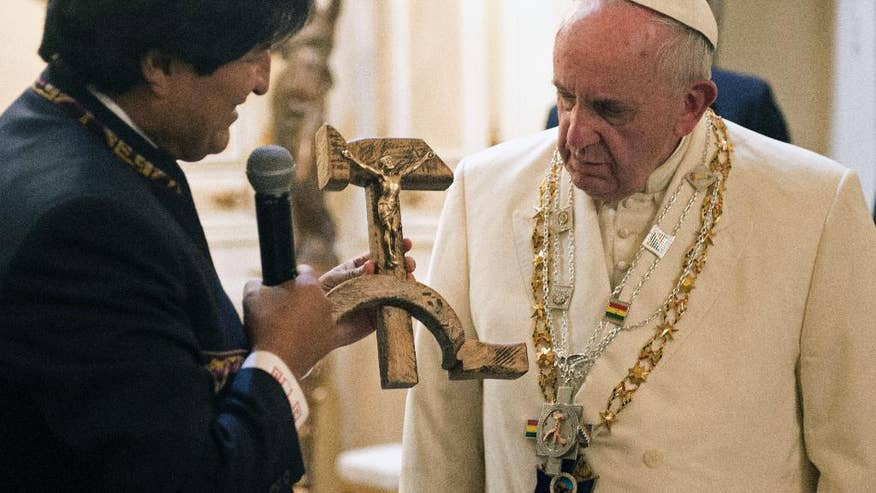 Why is everyone getting so excited?

The Holy Father, or at the very least his advisers, I am sure knew exactly what they were getting into. After all the whole Papal entourage stopped to pray and reverence the very spot where the Jesuit Father Luis Espinal who introduced this 'fusion' crucifix into Bolivia was shot down. One can hardly blame the President for giving the Holy Father a symbol so closely united to Fr Espinal whom the Holy Father had so publicly embraced on his Bolivian visit.

Another point is this crucifix so obviously symbolises the post-Concillior view of 'dialogue', maybe not from the point of view of eminent clergy and theologians, who would defend every dot and stroke of Catholic doctrine with rogour but certainly from those who are dialogued with and haven't been trained in its arcane subtleties,  and maybe also those who Catholics who simply overhear the dialogue - who haven't been trained either.
Bringing Christianity and Marxism together is obviously what many assume dialogue to be in parts of South America. The Holy Father too, is he not always urging the necessity of dialogue and also saying we must allow ourselves to be changed by it.

This crucifix is dialogue made tangible. Why be shocked by the outcome of dialogue? Next people will start complaining about about the fusion of German Catholicism and Protestantism, when they are presented with its tangible results: the Church of Marx and Kasper and when that itself enters into dialogue with the rest of the Church at the Synod.

This too is dialogue made tangible!

added later
It is worth reading this account
By the way, this image by Espinal was very much around in the 1970s, I remember seeing it various places. Fr Lombardi's intimation that it was unknown needs caeful examination
at July 10, 2015

All I see is Jesus being crucified once more on the hammer and sickle, just like Cardinal Slipyj

Christ is depicted crucified on the very symbol of Marxist revolution. Is that not one of the major themes of the twentieth century?

The Church's role is to Teach, not to dialogue. To save souls, not to discuss obscure now, long-discarded political concepts.

Pelerin,
That would be truly shocking, Fr Z takes this up
http://wdtprs.com/blog/2015/07/bolivia-holy-communion-from-paper-bags-at-papal-mega-mass/

I think people have missed the subtle reference to Isaiah in Comrade Morales' gesture.

If that were so it would be sacrilegious. Suggest you research and check this thoroughly.

Are the films genuine. How many priests were involved. Did the local Church authorities know what was going on?

These large scale Masses and Communion distributions, not an essential part of the Mass incidentally, should be stopped.

They are wide-open to abuse, which means that cetain mal-intent people will certainly pursue that abuse.

I find the "crucifix" offensive and I also believe that God, also, has found it offensive. Some of the clergy did indeed side with the Reds during the Spanish Civil War and it would appear that the designer of this "crucifix" was both a priest and a Jesuit with extreme Marxist leanings.

Signs (and symbols) of the times. What would the priests and faithful tortured and murdered under that hammer think of their Lord 'crucified' on a symbol of Marxist triumphalism? Maybe next we could have Him hanging off a swastika - what would St Kolbe think? Or dangling off the torch of the statue of liberty? The 'ecumenism of blood' is big business these days. You no longer have to live in the name of Christ but simply be visciously murdered by those who hate Him - even you're not partial yourself - and suddenly there is something to celebrate.

"...those not living within the Catholic Church, not only pagans, but also Jews and heretics and schismatics cannot become participants in eternal life, but will depart "into everlasting fire which was prepared for the devil and his angels" [Matt. 25:41], unless before the end of life the same have been added to the flock...no one, whatever almsgiving he has practiced, even if he has shed blood for the name of Christ, can be saved, unless he has remained in the bosom and unity of the Catholic Church." Pope Eugene IV: Council of Florence, Decree Cantate Domino

Marx wrote quite a lot on religion. He hated it. If I remember rightly he said that "The criticism of religion is the beginning of all criticism". How can belief in God be reconciled with dialectical materialism?One supposes that it is not the Marxist philosophy (outside which according to its adherents there is no salvation), but practical elements of policy which may attract some Christians.

Jacobi asks 'are the films genuine?' I watched the Mass live on the KTO channel and the video can be seen on their website. Videos can be altered but surely not a live broadcast?

Thank you Fr Ray for your link to Fr Z. He must have put on this post last night after I had browsed through the Catholic blogosphere.

Watching some of this South American visit I noticed there is an awful lot of wind there so Fr Z's suggestion that bowls were used inside bags seems to have been a possibility although I only saw what looked like a scrunched up paper bag. In Lourdes at the outdoor Masses silver(?)ciboria with hinged covers are used to protect against the elements. Bolivia being a poor country would have been criticised if they had had to buy something similar.

Thanks to the LMS there was a fascinating lecture by Professor Roberto de Mattei at the Church of the Assumption in London last night. The title of the talk was 'From II Vatican Council to the Synod: the teaching of Michael Davies' but he dwelt very much on the failure of the Council to condemn communism and the infiltration of the Church by agents of the KGB.

That cross wound up at a Marian Shrine. What an outrage. Not surprising though. I do not think Our Blessed Lord is going to allow His Own Mother to be savaged by anyone.

"The birth of Jesus. There was no room for them. They had no house, no dwelling to receive her Son. There was no place where she could give birth. They had no family close by; they were alone. The only place available was a stall of animals. Surely she remembered the words of the angel: “Rejoice, Mary, the Lord is with you”. She might well have asked herself: “Where is he now?”...

The flight to Egypt. They had to leave, to go into exile. Not only was there no room for them, no family nearby, but their lives were also in danger. They had to depart and go to a foreign land. They were migrants, on account of the envy and greed of the King. There too she might well have asked: “What happened to all those things promised by the angel?" (ZENIT 11 July 2015 - Pope Bergolio speaks at Paraguay Marian Sanctuary of Caacupe")

"I often think of Our Lady, when they handed down to her the dead body of her Son, covered with wounds, spat on, bloodied and soiled. And what did Our Lady do? ‘Did she carry him away?’ No, she embraced him, she caressed him. Our Lady, too, did not understand. Because she, in that moment, remembered what the Angel had said to her: ‘He will be King, he will be great, he will be a prophet…’; and inside, surely, with that wounded body lying in her arms, that body that suffered so before dying, inside surely she wanted to say to the Angel: ‘Liar! I was deceived.’ She, too, had no answers. (Vatican Radio Chapel of the Domus Sanctae Marthae 29 May 2015 - Bergolio meeting with a group of gravely ill children and their families)

"An anecdote, just to illustrate this, it is not to laugh at it, I took it with respect, but it concerns me; when I was elected, I received a letter from one of these groups, and they said: "Your Holiness, we offer you this spiritual treasure: 3,525 rosaries."

Why don't they say, 'we pray for you, we ask...', but this thing of counting... And these groups return to practices and to disciplines that I lived through - not you, because you are not old - to disciplines, to things that in that moment took place, but not now, they do not exist today..." - June 6, 2013 Francis off-the-cuff remark to audience with the presiding board of the CLAR (Latin American and Caribbean Confederation of Religious Men and Women) -