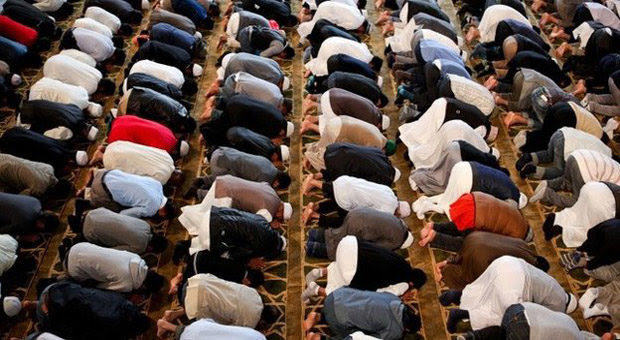 A few weeks ago I was walking down the main street here in the city in front of me was a heavily veiled Muslim women with two small children, a little further on were a  couple of chubby short haired women gazing into one another's eyes, they began kiss, the mother immediately  gathered her children to her side and covered their faces with her coat.

In Brighton there are two very obvious groups,  the LGBT community and the Muslim community, even in  the Labour Party here they don't seem to mix, though in the last General Election Labour did put up an Asian candidate, probably in attempt to gain the Islamic vote. I don't hear of much tension between the two communities, in the rather Brightonish way they seem to co-exist.

The world seems to be destined to split along pro and anti LGBT lines. Africa, the Islamic world, Russia and the Orthodox world against, whilst the US and its hegemony are pro, Cameron for example wants to export Gay marriage around the world. Increasingly it seems that issues of sexual equality will polarise the world. Western (or rather US) materialism and culture in the past was something which people wanted, or at least it crept in through Coca cola and McDonalds but as Mr Kenyatta said we don't want homosexuality, nor will every nation want gay Google or Hollywood. In many ways it seems the LGBT agenda will become the main symbol of Western culture and will be seen by the rest of the world as a mark of its decadence. Will rainbowed boots on the ground be welcomed in the Middle-East or 'aid' with a significant agenda in Africa?

Michel Houellebecq has written a book, Soumission, which in France seems to have caught the popular imagination, and everyone seems to be reading it. It is due to be published in English soon. It is about the rise of a popularly elected Islamic government in France and the gradual imposition of Sharia law and take over of French institutions by Islamists, the Sourbonne for example is bought by the Saudis.

In Brighton I wonder what will happen in a few years time when Islam becomes a political force in our city, which it seems it is bound to become. Interestingly one Jewish business near me was forced to close, not because of anti-Semitism, obviously, but by continuous pro-Palestinian demonstrations. However, Jews are leaving Brighton and Hove, a traditional Jewish centre, as a Jewish student said to a parishioner, "Brighton and Hove is becoming increasingly unwelcoming to Jews".

Bravo to that Muslim woman. I shudder to think of the response most Catholic mothers would give in such a dreadful situation.

100 years ago GK Chesterton's book "The Flying Inn" looked at how the Islamic Revolution would be brought about in England, through the treachery of our upper classes.

It is not right to use false language, language especially created to deceive, intimidate, incriminate and penalise those who adhere to the more objective, truthful, pre-existing language, and the moral truth it properly discloses and represents; it is wrong to use false language purposely-devised to corrupt reason and morals and prevent the warnings and denunciations and recognition that are appropriate when confronted with intrinsic evil. We need everyone to speak the truth, most especially our pastors; and objectively dishonest, ideologically-contingent language cannot be used to evince truth. When one adopts the imposed language of the enemy of Faith and morals, of truth, one is immediately helping the enemies cause, especially against the young Anne others vulnerable to the lies therein. Blessed Michael, the Archangel, defend us in battle . . .

Do the English really want to be subsumed by other ethnicities and Islamists especially? Why does this go on? Why is Christianity not more attractive than homosexual ism and Islam?

"In Brighton there are two very obvious groups, the LGBT community and the Muslim community." I guess they have a shared desire, even passively - the submission of the Cross. Still seems a bit rich shielding the kids eyes from one sin - homosexuality - when those kids are being raised in a polygymous culture with little respect for the innocence of children in other ways.

You touch on two critical factors. Islam and Western moral degeneracy. They will not co-exist for long.

I shall look forward to reading Soumisson (in English of course, my French is not that good) but I suspect we know what is in it and what it predicts. The Compliance of the French Government in removing female police officers from the Saudi guard, and clearing the beaches of female bikini-clads within view of the Saudi princes, (much to their, the Saudi princes disappointment I suspect), indicates the already extensive Muslim influence in France. Not far away, Northern Brussels, a city I know well , is already an effective Islamic Caliphate.

Bombs apart, within a period of my lifetime, (I am a Septuagenarian), differential reproduction rates alone will almost certainly ensure a Muslim majority in several European countries, including the UK. The Muslims will then with some grounding, insist on the Caliphate.

And the people who will get the real shock, will be the morally degenerate Secularists. And boy, they will not like it!

The West way underestimates the ambitions of Islam. There's a political dimension to it, with the Sharia, which makes it very different to other religions. I know there's a problem there with a lack of a central teaching authority, but if the radicals grow, the problems are only going to get bigger. We are fast approaching the stage where hand-wringing, and hoping the problem fizzles out isn't going to work.

Here's an article by a Danish psychologist on Muslims in the Danish prison system which I think says a lot about the problems we are facing:

Jewish businesses in Brighton are being systematically driven out and Synagogues are being desecrated. This sort of thing is not being done by Brightonians but students in the Universities and it is not moslems either

Ah, the evils of state-enforced multiculturalism.

BJC,
Have tried to call up your ref on Google, but it blocked. Big Brother has got at Google. Got it via Firefox. A good professional analysis, saying what most of us already intuitively know.

We are in for trouble!

G.K. Chesterton wrote a novel, "The Flying Inn", which addresses these very concerns with a darkly humorous treatment that only he could spin. Well worth the read. Hopefully he may be a saint one day.

One wonders how many of the Pro-Palestinian demonstrations were because of anti-semitism. No

group other than the Palestinians seems to enjoy such support even though compared to Tibetans,

Chechens, Kurds, and many others their grievances are very minor and were more than balances by the

expulsion of Jews from Arab lands in 1948.

The US administration may want LGBY activity but I can address the great majority of US voters do not want this to be law. The unfortunate realization that the US Supreme Court makes the rules that change our social fabric for the worse, routinely changing our voting record by the switch of a pen. We do not want to see our Sacrament of Marriage decided by a 9 member jury.. God will have the final say.

Thank you for the link- BTW - it works fine on DuckduckGo.com .

“The Truth”. Thank you - So right and very well-expressed. The truth always beats inanities, opinions and lies.

If only more ordinary folk could be bothered to see that.

Fact-checking is essential, in every way. Few bother about it, as “They saw it on the telly”.