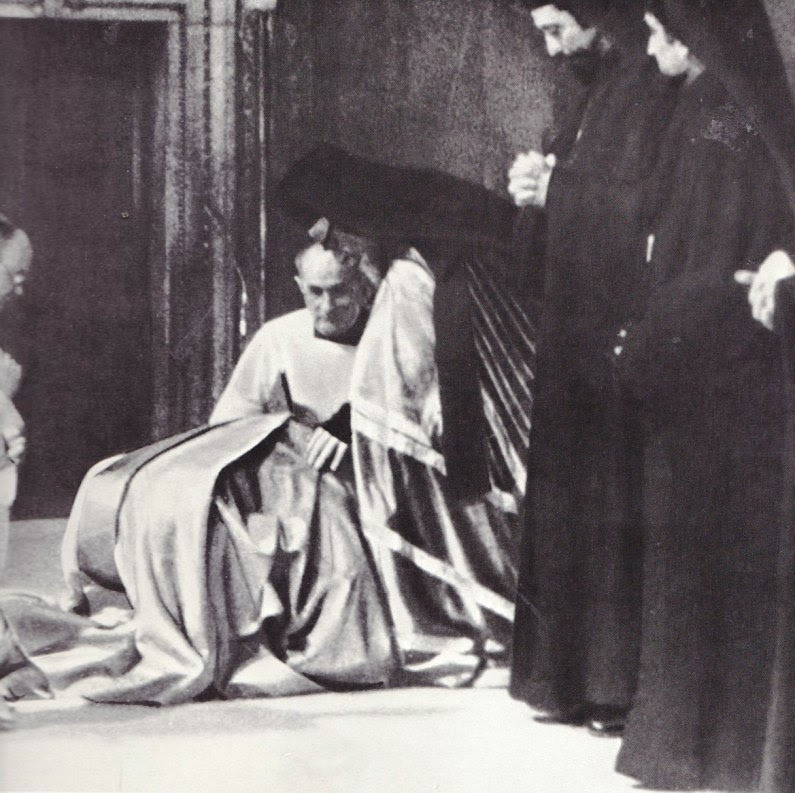 "The image is the message", that apparently is what the Holy Father said about the meeting with the Patriarch of Moscow, the first since the the sixteenth century (?) but not as the Vatican Press Office inaccurately reported since the 11th Century.

Blessed Paul VI might have said the same about image being message after his falling at the feet of the Patriarch of Constantinople, Athenagoras and kissing them at their meeting in Jerusalem. He was overcome by the encounter which was indeed the first since the Great Schism. Apparently the dear old thing would often burst into tears or make some extraordinary gesture. It was gesture politics, he was a man of gestures, to the point where many, not just his enemies, questioned his mental balance. Alas, poor Hamlet!

For Anglicans, there was yet another famous gesture. When he met Archbishop Ramsey for the first time, he gave him the ring he had used as Abp of Milan. Until recently my Anglican friends had told me it was 'Papal ring', that is the Fisherman's Ring, but no, it was a spare ring he happened to have, for which he had no use. Until his death Ramsey had worn it as his personal ring, it was on his finger as he died and was removed from his corpse, post mortem.

Quite what the Pope's intention was is anyone's guess. It is stretching things alot to assume it was a repudiation of Apostolicae Curae, or even a recognition of Ramsay personally as a brother bishop. Ramsay had gone to the usual extraordinary Anglican Catholic party's lengths after the publication of the 1928 prayer Book to ensure the 'Dutch tutch' and stories have gone the rounds for years, that after his Anglican episcopal ordination he was ordained by a rogue Orthodox too. Validity was important to him, as was full sacramental and doctrinal unity. For Anglican Bishops of Ramsay's generation, overcoming the problems identified by Apostolicae Curae, which are essentially about the roots of Anglicanism by giving it Dutch roots was seen as a solution. Of course that was before the ordination of women,

It is of note that successive Archbishop's of Canterbury have worn this Milanese ring in their subsequent encounters with Popes. For Catholics it is simply a ring, a sign of honour, like rings worn by the Canons of Northampton and other Cathedral Chapters, or even Abbesses, in itself it has nothing whatsoever to do with episcopacy.

Gestures are simply that, gestures. Anglican friends have been deeply moved by the current Pope giving the current a wooden replica of the ivory crozier reputed to have belonged to Pope St Gregory. What does it mean, beyond a photo opportunity? Well, little. It is an act of friendship, a recognition not of episcopal order but of jurisdiction. Nuns too can carry such an ornament, as laymen, 'commendatory abbots', often did. Certainly it is recognition that the carrier has 'oversight' or jurisdiction over a community, whether it is nuns or of Christian people but it says nothing about the validity of orders.

If anything, the giving and receiving of a ring or crozier says more about the recipient and their relationship to the giver than it does about the one who does the giving, receiving a crozier from another involves an acknowledgement that they are in some sense your superior, this is what the Investiture crisis was all about.

By his reception of a crozier from the Pope, although it was still in its box, did Abp Welby concede that that his authority to exercise jurisdiction (not orders) comes from the Bishop of Rome. Was it repudiation of, "the Bishop of Rome has no jurisdiction in this realm of England". For those of Byzantine sensitivity about sign and symbol what was the significance of the crozier still being broken in its parts in its plastic covered box when carried out the church by the bishop. In this time of the most Ultramontane papacy ever, 'Dottore' Welby, as he was referred throughout the joint service should beware of Argentinians bearing gifts.

Someone, an Anglican. asked me about the Pope and il Dottore Welby given a shared blessing, it is unfortunate but much to their credit that Anglicans seem to have a higher theology of such things than most Catholics. For most of us a blessing has become simply a prayer.

In the past the Pope Francis seems to have been happy to be prayed over by Pentecostals and to have received their blessing whilst kneeling, and even to have hands laid upon him.
In parishes around the world lay people (Extraordinary Ministers of Holy Communion, especially) seem to bless other lay people with impunity.
The post - concilliar Rituale seems to have stripped any sense of 'change' to a blessed object, it merely thanks God for the object or person.

'Dottore' Welby should beware of Argentinians bearing gifts and especially those who continue to renew thier Argentinian driver's licence.

Where is Mary in all this talk?

I believe this applies to icons. Saints. Common Saints in an eccumenical world we must add I think. The icon of Christ - all words. The rest of signs God acknowledges or not according to our intents. There is no higher image than Him on throne or on the Cross.
We are not living icons. Only Christ was. We either accept this or discover the bitter way to this.


"the meeting with the Patriarch of Moscow, the first since the the sixteenth century"

The Patriarchate of Moscow was created in 1589; no pope ever met with a Patriarch of Moscow prior to the recent meeting of Pope Francis and Patriarch Kirill. The Metropolitan of Kiev and All Russia left Kiev in 1316 and in 1322 settled in Moscow. Metropolitan Isidore (a Greek, appointed in 1437 by Constantinople, like almost all previous metropolitans) attended the Council of Florence, where he was a strong proponent of the Union achieved there - but when he returned to Moscow in 1441 and proclaimed the Union, he was imprisoned and deposed. Escaping in 1443, he went to Rome, where he was made a cardinal, and spent most of the remainder of his life there (although he was in Constantinople in 1553, as papal legate, at the time of its fall to the Turks, disguised himself, but was nevertheless taken prisoner, later escaping).

In Russia, an anti-Unionist successor was elected in 1448, ignoring Constantinople; in 1461 the title was changed to Metropolitan of Moscow and All Russia; it was a later Metropolitan of Moscow who was elevated to Patriarch in 1589. Metropolitan Isidore altered his title subsequently to Metropolitan of Kiev, Galicia, and All Rus', and a line of metropolitans in union with Rome lasted there until the late 1490s, when they seem to have fallen silently out of communion with Rome (they had striven to be in communion with both Rome and Constantinople at the same time, until in the 1490s some Polish Catholic prelates tried to "latinize" them, and declared that they would no longer be recognized as Catholics if they refused - and they refused).

So I think that the last Metropolitan of Russia who met a pope would have been Cardinal Isidore.

Dr Tighe, yes you are of course right, I was thinking of the Metropolitan of Moscow. or at least bishop who served that See and his presence at Florence, and as Fr Hunwicke speculates his likely encounters with the Pope.

FrI believe that one archbishop according to catholic views cannot anoint another bishop on his own, It must be three from the neighboring sees. That is why I believe the dutch touch is nothing more than a passing smile.I am quite literally understanding this from the appointing of a catholic bishop in the Latin church

MH,
Don't confuse norm and custom with what is necessary.
All that is required is one bishop to lay hands on a candidate, as happened in many places even gulags under Communism.
Post VII we stress not a 'pipeline' model but a conjoining to the College of Bishops. For many Anglicans I suspect the 'pipeline' is imortant, as is the pedigree of the ordainers, for us Catholics we can afford to be much more relaxed.

Re Extraordinary Ministers of Holy Communion blessing with impunity, I've noticed that too. It used to be the case that the minister was instructed to touch the person-not-receiving's shoulder and say, 'May the Lord bless you and keep you'.