The Silent Church versus Chattering Church 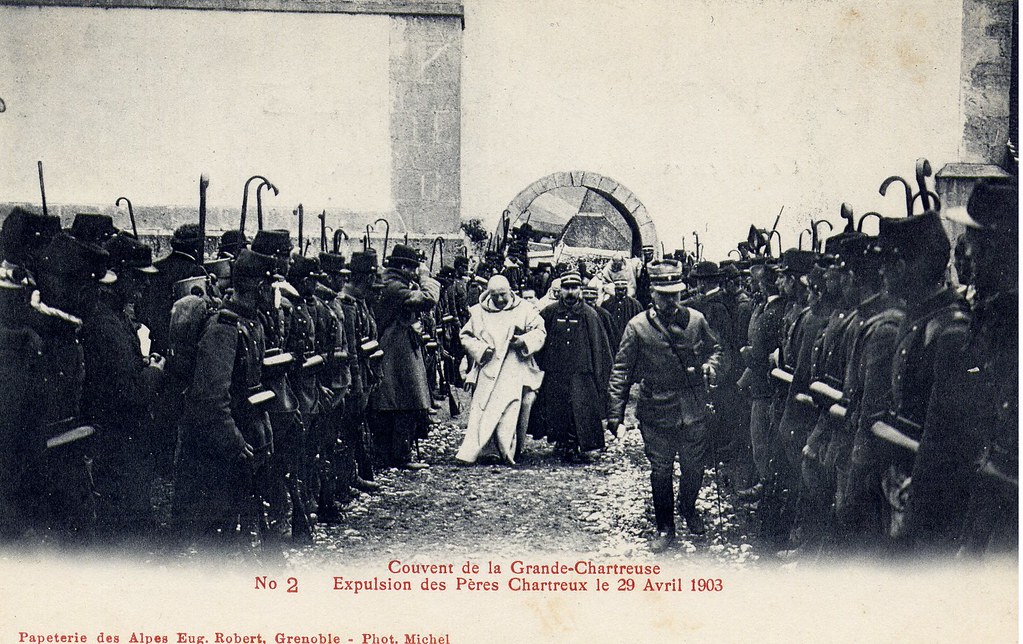 Why do attacks on the Church always begin attacks on contemplatives? It was the Carthusians the French masonic government first attacked in 1903, just as bloody Henry had begun his English Reformation with martyrdom of St John Houghton and his Carthusian companions.

The silent Church is always a greater threat than the chattering Church. The chattering Church is easily manipulated, it depends on its own resources, its own wisdom and insights, it is receptive to novelties and eager for change. The silent Church is close to Christ, it contemplates the essential mysteries of the faith, it is in the World but not of it, it depends not on its own resources but the Power of God. It is united to an unbroken Tradition.

The silent Church is a Church of prayer, it is not inactive but neither is it yet another NGO, its activity comes from its contemplation, its communion with God. The chattering Church is the foundation-less house built on sand, that has no permanence and come wind and rain will be swept away.

Pope Benedict in many ways has repeatedly acted a little like an Old Testament prophet, choosing prophetic signs often over words. I cannot help but think his retiring to a life of contemplation is a prophetic sign to a Church far more interested in chatter than silence.

Cardial Robert Sarah has an interview in Le Nef, translated here,  it preludes his new book The Strength of Silence - Against the dictatorship of Noise, at the moment it is only available in French. In the interview he speaks of silence in the Liturgy, returning to the subject of ad orientem worship, one can grasp a little of why he understands it as being so important.

To be "Hanged in their habits"
What a glorious thing
For their silence screamed,
"Christ is the King!"

Like Innocent Carthusians
With staff and rod
Who continue the defence...
The Priest-sons of God!

The world needs silence, but it is avoided like the plague. This is because it either leaves you alone with God - or much worse, with yourself!
The Contemplative Orders are the soul of the Church and the decimation of these Orders at this present time is one of the primary wounds the Church is having to bear.
God Bless you Father for yet another very poignant post.

Father, aren't you accepting something of a false dichotomy here? Is not your blog a part of the "chattering" Church? It certainly isn't silent. Isn't it the quality of the "chatter" that matters?

"He was offered because it was his own will, and he opened not his mouth: he shall be led as a sheep to the slaughter, and shall be dumb as a lamb before his shearer, and he shall not open his mouth." Isaiah 53:7

"And when he had opened the seventh seal, there was silence in heaven, as it were for half an hour." Apocalypse 8:1

This is an excellent point. The constant pursuit of synthesis by the contemporary Church has been catastrophic and its noisiest manifestations are Dignitatis Humanae and the Novus Ordo liturgy.

Maybe it's because the adversary part is much annoyed by those who don't express their opinions, they can't be slammed wrong because they appear vague to those about to vote - people. This why , the vocative hierarchs are a bad move. It's like poker, a psy game of power. It is impossible during prozelytism which implies discussion, for some ideas not to be useful for the adversary. On the other hand, the Church, the Christians, we are obliged by dogma to confess our Faith. It's what the early Holy Fathers, the Apostles, Christ have done especially when asked. Modern negotiations techniques for corporate life also advise to always keep quiet and listen to everything. The most informed wins. The masons let live longer those who talked, for information and for learning HOW to explain their ideas to the masses. The chatters did nothing wrong, they outspoke their beliefs as commanded by God.

The chattering in my New Mass parish is such that I have had to, on some occasions, switch of my expensive new hearing aids which has niggled me much!

Father Blake, truly, you are right. The noise-makers cannot bear the glorious sound of silence. The last time when I was in Paris and went into the magnificent cathedral of Notre Dame de Paris, "suitable" music was being played at everybody. It was like being inside a gigantic Gothic lift and it’s not just at Notre Dame where this uninspired affliction must be suffered. Pity Our Lady, she must listen to non-stop ear-bashing because someone thought of providing “atmosphere”.
Whilst the Real Presence is often tangible and great consolation, sometimes the open countryside can be more conducive to meditation than an individual church. Some musicians are easily be distracted by technical components of the piece being enforced on their reluctant ears.
.

I'd say the church needs both -- provided, as said above that the QUALITY of the chatter matters.

Methuselah - I wonder if the 'suitable' music was being played in order to drown the chatter?! Your expression of Notre-Dame being a 'gigantic Gothic lift' made me smile.

I well remember trying to get to sleep one hot summer's night many years ago when the occupants of the pub opposite, all windows open, were belting out a very popular pop song at the time. It was 'Silence is Golden'!! At least we saw the funny side.

I do remember a time when there was always silence in a church both before and after Mass. People used to gather to chatter outside, never inside. BobBrookes has a good point - perhaps we are all afraid to be alone with God or ourselves and that could be why silence is so rare today. You can't even go into a cafe or pub nowadays without loud music blaring forth making conversation or even thinking near impossible. At least they don't have music on the buses - yet.

The Emperor Joseph of Austria also attacked contemplative religious communities in Austro-Hungary. He argued they did no practical good such as run schools or parishes. As a result many of these communities founded schools and took on parishes in order to survive. The way of thinking used by Joseph is rationalist and did not factor in all the good and practical things monks and nuns do it terms of culture, technology and ideals. The French Republic declared war on the Church and attacked the soft targets first. Contemplative abbeys and convents are not able to defend themselves. Because they are enclosed they are able to see issues in a much more real way. Perhaps living a ascetical life they are able to face dangers most of us run from and appease. Most of us are influenced through propaganda in movies, newspapers and the other media. We are therefore subtly influenced and our rage is watered down.

Cardinal Sarah is having a tough time especially in France. According to 'Riposte-Catholique' the 'Association Pro Liturgia' sent a letter to every Bishop in France asking if Cardinal Sarah's suggestions for celebrating Mass had a chance of being applied in their diocese.

The good Cardinal was also sent a letter informing him of their action. Despite his busy schedule he had the courtesy to send a reply.

However only ONE French Bishop replied - all the others did not even let them know the letter had been received. The one who replied wrote that he had been a Priest for 40 years and he saw no interest in following the Cardinal's suggestions as he 'had noticed growing congregations' in his diocese. (Perhaps he needs to go to Specsavers!) 'Riposte-Catholique' writes that having examined the figures this diocese was in the same condition as others in France ie churches closing, fewer Masses, number of vocations down etc.

I wonder how Cardinal Sarah's new book 'The Strength of Silence' will go down with the hierarchy?

It does trouble me, all this pre-Mass yakking, as if it were something important which cannot wait until after Mass. Why do some blather so much ? I don’t hiss at them, nor turn on the lasers, in fact, I don’t even turn around, I just seethe, when I should have an entirely different frame of mind. It happens not only at NO Masses, but at TLM masses too. So disrespectful, for one thing and so distracting for a second.

Where I assist at Mass regularly, the numerous small children, 4, 5, 6 or 7 even per family, tend to be absolutely quiet, which I reckon is down to good family discipline and a proper interior disposition. If one does get too far out of line, a gentle “reminder” from mother soon reminds the offender of where he or she is.

Totally off-topic, but I really think there needs to be some kind of organised protest against the hijacking of the Catholic Herald by the Trump campaign. I for one am seriously considering cancelling my subscription. Any thoughts?

I agree with you 100% insofar as your remark is off-topic and, in inviting a certain amount of political 'chatter' thereby, hijacks the flow of pertinent discourse relative to the topic at hand.

Insofar as all things chattering are concerned, I have just read in the NCR that Edward Pentin reports Francis has announced that Cardinal Sarah has been replaced as the person who was to have opened the John Paul II Institute's academic year. Pope Bergolio will be taking Cardinal Sarah's place.

The link is here (below). Draw your own conclusions. Muffled by mercy comes to mind.

I have already cancelled my subscription to the CH because they have witdrawn all comment.